The ‘Force’ is strong with Expedition 45 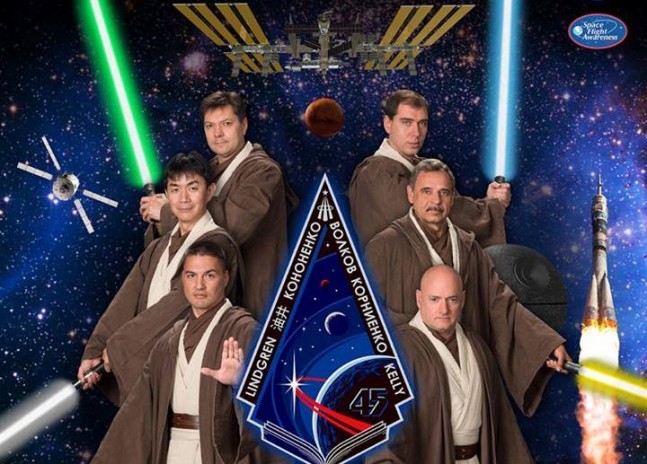 For some time now, NASA has taken to adapting iconic sci-fi, action and fantasy movie posters, and has produced images highlighting upcoming missions that the space agency is about to take part in. For the Expedition 45 crew, it was, “all too easy” to get the six space flyers that will comprise the crew to put on the robes of Jedi masters from the popular Star Wars series of movies. Much as the diverse locations that the Jedi themselves hailed from, the crew of Expedition 45 come from points across the globe. This mission in particular will ensure that at least two of their number lose the braids of the Padawan.

While the Star Trek franchise might have coined the phrase, “Where no one has gone before,” the Expedition 45 crew will also be charting new territory during their mission on the International Space Station (ISS ) as some of the space flyers are scheduled to spend a year on the orbiting laboratory. Kelly and Kornienko will fly to orbit this March atop a Russian Soyuz booster and are the pair that has been selected to carry out a year-long stay on the station. They will not, however, be beating any long duration records. According to a report appearing on NBC.com that record will still belong to Russian cosmonaut Valery Polyakov, who stayed some 438 days aboard Russia’s Mir space station between 1994 and 1995.

Kononenko, Lindgren and Yui will hang their lightsabers next to Kelly’s and Kornienko’s the following May.

With interest in NASA fading, the space agency has looked at ways to increase interest and awareness in its efforts. What better way than by tapping the public’s interest in popular culture? Star Trek, The Matrix, Harry Potter, Star Wars, Gangnam Style and Iron Man have all seen their likenesses used in NASA promotional efforts.

According to collectSPACE, the concept for the poster came from Lindgren, who his fellow crew members might want to keep a close eye on. Lindgren’s lightsaber is red, meaning that he is Sith, the sworn enemy of the Jedi.