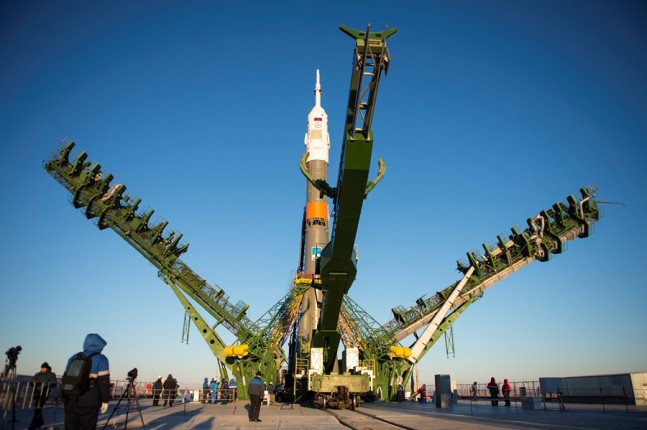 A team of three international crewmembers are finalizing their preparations for launch from the Biakonur Cosmodrome LC-1 in Kazakhastan which will take place on Nov. 23 at 4:01 p.m. EST (2001 GMT). This journey, which started years ago for the crew and technicians involved, will ultimately see these diverse space-bound explorers joining their fellow Expedition 42 crewmates aboard the International Space Station (ISS). The trio has expressed enthusiasm about their upcoming flight – as well as the busy workload that their mission

NASA astronaut Terry Virts will be the only American aboard this launch, and will be joining his NASA counterpart Barry Wilmore who is already on the ISS. Born in Baltimore, Maryland in 1967; Virts is a Colonel in the U.S. Air Force, and previously flew to the ISS as part of the STS-130 crew aboard Space Shuttle Endeavor. This will be Virts’ first flight on the Russian Soyuz and he expressed uncertainty as to what he will be able to see during the flight via a conversation on Twitter. “I’m not exactly sure what’s between my window and fairing-dark metal and cables. At separation it will still be night outside,” Virts said.

Besides being an astronaut, Virts is a bit of a celebrity, having appeared as a technician on the TV series, Star Trek: Enterprise. Virts won’t be alone on this flight, quite the contrary, he will be joined by two other members of their country’s Air Forces (all three members of this portion of the Expedition 42 crew are in their homelands’ Air Force) a fact denoted in the crew’s mission patch.

“It’s basically the artificial horizon which, as Anton has said, is the main instrument that you have in your cockpit. That was the basic idea that Anton himself came up with,” Cristoforetti said. “It shows actually a pitch of the aircraft if you were reading it on the artificial horizon of the T-1 to the inclination of the orbit and then it shows a bank angle of the roll of 15 – which is the TMA-15M spacecraft.” Roscosmos’ Anton Shkaplerov has one previous spaceflight to his record which was a long-duration mission of 165 days, and will be joining his fellow cosmonauts Alexander Samokutyaev and Yelena Serova already on board the station. Shkaplerov is a retired Colonel in the Russian Air Force and will serve as a flight engineer aboard the orbiting laboratory.

ESA astronaut Samantha Cristoforetti is the third and final member of this crew, this will be her first launch into space. She is a Captain in the Italian Air Force and the third female astronaut for ESA. Cristoforetti is a highly-skilled mechanical engineer who also speaks five different languages.

Final integration of the spacecraft and launch vehicle was completed this week in preparations for the Nov. 23 flight. The Soyuz TMA-15M spacecraft was fueled and its on-board systems were checked late last week before it was moved to the integration facility to be matted to its Soyuz-FG launch vehicle.

Soyuz-FG is the only current rocket used by the RSA for manned launches. Alone; It stands 162.4 feet (49.5 meters) tall and weighs 672,000 pounds (305,000 kilograms). Once the impressive array of engines fire, including the four main liquid-fueled booster rockets, the booster can deliver more than seven metric tons into low-Earth orbit (LEO). Each of the crew members on this flight hail from their respective country’s Air Forces. Photo Credit: Aubrey Gemignani / NASA

This flight will be the 47th launch for this rocket design, which includes 10 Soyuz-FG/Fregat variants.

All steps from fueling checks to integration have been performed without incident and the rocket and spacecraft have been given a clean review, officials have said. After this was confirmed, ground crews began the slow process of moving the launch vehicle via rail out to the launch pad. “The mission that we will be doing on the station is going to be very busy. We are going to be primarily busy with maintaining the station safely, keeping it running,” Virts said. “But of course, the mission of the space station is science and we have a very aggressive science program that we are doing, roughly 170 U.S.-based experiments from NASA, U.S. companies and private educational institutions as well as over 70 international experiments.”

The Soyuz-FG rocket, capped with the Soyuz TMA-15M spacecraft, was rolled out to the launch pad Friday, Nov. 21, a few days before its scheduled flight. Its placement in the launch complex marked the start of final preparations for flight.

Crews will now spend the next two days going on all vital systems that will eventually lead up to fueling the launch vehicle and continuing to meeting critical deadlines in preparation for launch day.

TMA-15M’s crew has spent the last few days relaxing when compared to their usual schedules which include a lot of hard-work and training in preparation for this launch over the last two years. Time was given to them to visit with their families and several traditions, including a final hair cut and health checks, were performed before they enter the spacecraft on Sunday.

After blasting off to space, the crew members will travel for a scheduled six-hour spaceflight until they reach the ISS in orbit. During their flight the crew will orbit the Earth four times until their trajectory meets up with the space station.

If all goes according to plan, the hatches should be open and the three new crew members will join their Expedition 42 counterparts around 11:30 p.m. on Sunday, Nov. 23.

The Expedition 42/43 crewmembers will remain on the ISS, conducting science experiments and other vital tasks for station operations, until mid-May of 2015.

“We may end up getting a few spacewalks, if not more it looks like, and, so it’s going to be a busy six months,” Virts said.