Expedition 42: The crew of the Titans 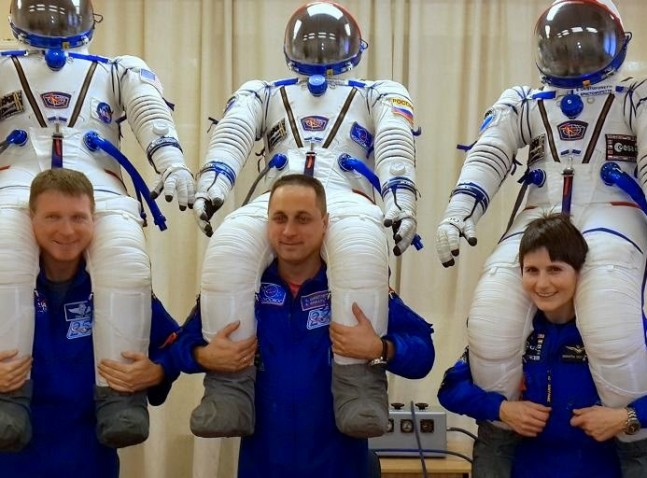 The crew of Expedition 42 poses for a photo with their spacesuits. Photo Credit: Samantha Cristoforetti/Twitter

The crew of the next Soyuz TMA-15M spacecraft, call-sign Astraeus, has passed pre-flight examination in Star City, outside Moscow, and departed to Baikonur, Kazakhstan on Tuesday Nov. 11. In Greek mythology, Astraeus was an astrological deity, and creator of the night sky. It is said, he took the stars and scattered them across the dark sky, so we can watch them at night. The crew will be ready to see the starry sky from orbit after they make their journey to the International Space Station. Russian cosmonaut Anton Shkaplerov, European Space Agency (ESA) astronaut Samantha Cristoforetti and NASA astronaut Terry Virts are slated to launch on Nov. 24 from the Baikonur Cosmodrome in Kazakhstan. Before the flight, hugs and handshakes are stronger. The youngest daughter of Shkaplerov, Christina doesn’t let go his father’s hand. Sorrow mixed with joy. Ahead – a long-awaited space mission. The crew of the Soyuz spacecraft is almost at the finish line, and Star City is the place where astronauts say goodbye to their loved ones.

At 2.00 p.m. Moscow time on Nov. 11, a TU-134 airplane belonging to Gagarin Cosmonaut Training Center, landed at Krayniy airport in Baikonur. Next day, the primary and back up crews had their first drill in the assembly, integration and test building of the cosmodrome’s pad 254. The crews got acquainted with the placement of cargos in the spacecraft, checked the spacecraft’s radio communication system’s efficiency, and expressed their wishes to the experts of Energia corporation. Cosmonauts and astronauts also tried on the spacesuits, and tested the Iridium phones and laser rangefinders.

“Convenient or inconvenient – it doesn’t matter,” says Cristoforetti. “It’s not for walking, it’s for flying into space. The most important thing is safety.”

“You can also shake hands with spacesuit! When inflated, he’s a bit of a rigid guy,” added the ESA astronaut.

“Next time we are in these suits we will be walking out to the real rocket – Soyuz TMA-15M,” said Virts.

After the drill, the launching teams of Russia’s rocket and space industry started to prepare Soyuz TMA-15M spacecraft for transportation to the fueling station for filling the spacecraft propulsion system’s tanks with propellant components and compressed gases. On Nov. 14, Soyuz TMA-15M fuelled with propellant components and compressed gases was delivered to the Spacecraft Assembly and Testing Facility for final processing operations.

Among the main crew members, only Cristoforetti has no space flight experience. Both Shkaplerov and Virts had one mission in their career. The U.S. astronaut served as Shuttle Endeavour pilot, and will fly onboard Russia’s Soyuz for the first time. Cristoforetti is the first Italian female astronaut to go to space.

The crew will spend 170 days in orbit and will conduct more than 200 scientific experiments.

This article originally appeared on Astro Watch and can be viewed here: Expedition 42