Expedition 42 preps for their return to Earth 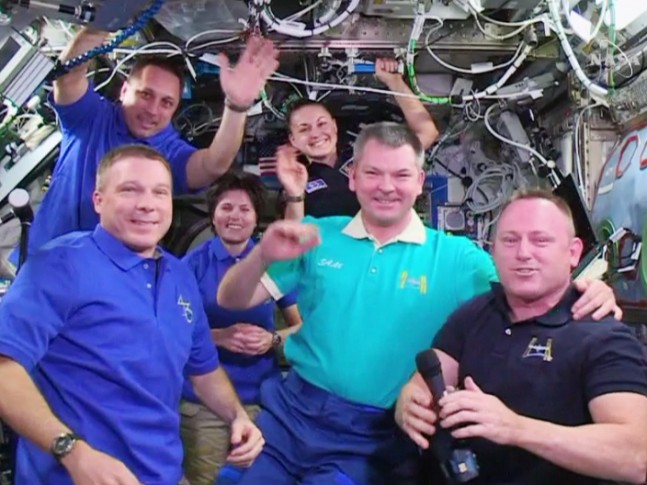 After an amazing set of spacewalks, Expedition 42 is scheduled to return on March 11 at 10:08 p.m. (EDT). The crew will complete 167 days in space since lift off from the Kazakhstan launch center (Baikonur). Barry Wilmore, station commander, along with cosmonauts Alexander Samokutyaev and Elena Serova have travelled almost 71 million miles (114 million kilometers). Combined, the crew members will have logged a total of 676 days in space after their return to Earth.

The biggest accomplishment for the crew included three spacewalks performed in rapid succession. These EVAs laid the ground work for commercial crew operations. Barry Wilmore and Terry Virts installed over 800 feet (244 meters) of cable and two antennas in preparation for the arrival of International Docking Adapters (IDAs) later this year. The adapters will allow spacecraft from Boeing and SpaceX to dock with the International Space Station (ISS). The pair also performed some crucial station maintenance.

The mission of Expedition 42 formally ended with the hand over ceremony onboard the ISS. Barry Wilmore, the station commander, transitioned  management to the new station commander and partner on the last three spacewalks, Terry Virts.

“I can’t say enough about the crew on board,” said Wilmore, “What a blessing. It is has been a joy.” As he handed over command to Virts, Wilmore commented, “As we say in the Navy: You have the helm.” The ceremony is based on naval tradition when a commander and crew complete an official rotation on seagoing naval ships. Near the end of the ceremony Virts replied to Wilmore, “You have been exactly what a station commander should be.”

After the official hand over, Virts gave a brief speech about what he and his team hopped to accomplish. He then gave his crew their new uniforms: polo shirts emblazoned with the Expedition 43 logo.

The Expedition 42 crew will begin final preparations for the return to Earth on Wednesday. The official farewell and hatch closing will occur starting at 3:00pm (EDT) with hatch closure occurring sometime around 3:25pm (EDT). After a few hours of preparation, the team’s mission on the station will officially end when their Soyuz craft (TMA-14M) undocks from the ISS at 6:44 p.m. (EDT). The Soyuz craft will begin its deorbit burn a little over 2 hours later. They Expedition 42 crew should be on the ground just after 10:00pm (EDT).

The remaining members of Expedition 43 will launch to the station from Baikonur on March 27. NASA astronaut Scott Kelly and cosmonauts Mikhail Kornienko and Gennady Padalka will lift off aboard Soyuz TMA-16M. Kelly and Kornienko will both spend a year in space as part of a long-term NASA study. They will join Terry Virts, Anton Shkaplerov and Samantha Cristoforetti already aboard the ISS.

Your comment about the Naval traditions made me curious. Who has had the longest run as Station Commander?
Or can you direct me in the proper direction, to find out myself?