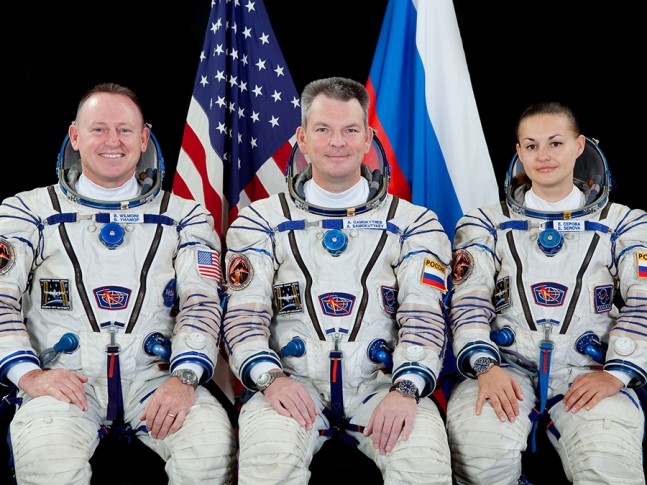 Expedition 42’s Soyuz (TMA-14M) spacecraft landed in the steppes of Kazakhstan last night at 10:07 p.m. EDT (0207 GMT). Commander Barry “Butch” Wilmore of NASA, and Alexander Samokutyaev and Elena Serova of the Russian Federal Space Agency (Roscosmos) were helped out of their capsule by Russian recovery teams after their successful 167-day stay on board the International Space Station (ISS). The trio stayed some 167 days on board the orbiting lab. Photo Credit: Bill Ingalls / NASA

The crew arrived at the space station last Nov. 23, spending months conducting research. The highlight of the mission was the three consecutive spacewalks to rewire the station in preparation for commercial crew starting in 2017. Spacewalkers Barr Wilmore and Terry Virts installed over 800 feet (244 meters) of cable in preparation for the arrival of two International Docking Adapters (IDAs) later this year.

The Expedition 42 crew undocked from the ISS at 6:44 p.m. EDT (1044 GMT) and started their voyage home. After short thruster burn to move their Soyuz away from the station, the crew began final preparations for the journey home.

At 9:16 p.m. EDT (0116 GMT), the crew engaged the engines for a near five minute engine burn designed to slow their craft down for re-entry. The entry appeared picture perfect with the crew landing well within the target range. After returning from such a long duration flight in space, gravity becomes a challenge for the astronauts. A team of Russian specialists including doctors and engineers assisted the crew in exiting their craft. As has become a tradition in Russia, the crew were wrapped in blankets and carried from the spacecraft to waiting vehicles for a quick medical checkout. The only pause for the team was a photo opportunity taken beside their ride home from space.

In addition to the Expedition 42 crew, the Soyuz craft also contained a number of experiments returned from the station. Russian scientists were awaiting access to two incubators containing planarian worms. A study of the effects of microgravity on organisms (The Effect of Weightlessness on Processes of Regeneration by Electrophysiological and Morphological Factors (Regeneratsiya-Planaria (Regeneration-Girardia))) will assess the impact of the station’s near weightless environment on the structural and functional regeneration of amputated organs and tissues of planarian worms.

The crew also returned 17 dosimeters that measured radiation levels inside the Japanese Experiment Module (Kibo). The information gathered will be used to improve crew health and safety within the space environment. The three Expedition 42 crew members were extracted from the Soyuz TMA-14M spacecraft in below freezing temperatures with snow and foggy conditions. Credit: NASA TV