Expedition 41 set to launch from Kazakhstan 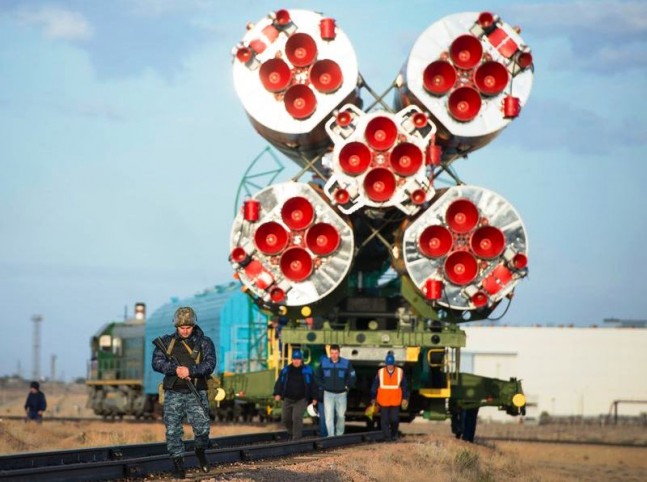 The Soyuz TMA-14M spacecraft is rolled out to the launch pad by train on Tuesday, Sept. 23, 2014 at the Baikonur Cosmodrome in Kazakhstan. Launch of the Soyuz rocket is scheduled for Sept. 26 and will carry Expedition 41 Soyuz Commander Alexander Samokutyaev of the Russian Federal Space Agency (Roscosmos), Flight Engineer Barry Wilmore of NASA, and Flight Engineer Elena Serova of Roscosmos into orbit to begin their five and a half month mission on the International Space Station. Photo Credit: Aubrey Gemignani / NASA

Beginning with the launch of SpaceX CRS-4 on Sept. 21 and the successful docking of its Dragon cargo capsule, the International Space Station is experiencing quite a busy week. The excitement is not over yet however, as the orbital laboratory is preparing for another visit. This time, the space station will welcome more than just cargo and crew supplies. Three new crew members are poised to lift off from the Baikonur Cosmodrone located in Kazakhstan atop a venerable Soyuz booster tomorrow, Thursday, Sept. 25 at 4:25 p.m. EDT (2:25 a.m. Friday, Sept. 26, local time).

The launch of the Soyuz TMA-14M carrying two Roscosmos cosmonauts and one NASA astronaut to the ISS will utilize one of Russia’s Soyuz-FG launch vehicle. The crew consists of NASA astronaut Barry Wilmore, as well as Russian cosmonauts Yelena Serova and Alexander Samokutyaev. This expedition is notable for Russia because it will mark the first space mission with a Russian woman cosmonaut – in twenty years. The Soyuz-FG carrier rocket and Soyuz TMA-14M spacecraft have been delivered and installed at the launch site in Kazakhstan. Photo Credit: Aubrey Gemignani / NASA

On Tuesday, September 23, RIA Novosti noted that the Soyuz-FG carrier rocket and Soyuz TMA-14M spacecraft had been delivered and installed at the launch site in Kazakhstan.

Already aboard the ISS are the three crew members of Expedition 40, which launched back in late May and have a planned return to Earth slated for November. The crewmembers are Russian cosmonaut Maxim Suraev, NASA astronaut Reid Wiseman and Alexander Gerst of the European Space Agency (ESA). When the Soyuz TMA-14M completes its six-hour, four-orbit ride to the station’s Poisk module, the completed crew of six will of the Expedition 41 crew will be in place on orbit. The Soyuz booster made its maiden voyage in May of 2001 and is the sole rocket that currently sends crews to the International Space Station. Photo Credit: Aubrey Gemignani / NASA

Expedition 41 began on September 10, 2014 and will end on November 10, 2014. This expedition includes research projects focusing on biology, physical science and Earth and space science investigations. In a mission summary released by NASA, this mission is described as consisting of:

“Seedling growth, observation of meteors entering Earth’s atmosphere and studies of animal biology and none and muscle physiology define the research of Expedition 41. Model organisms, such as plant seedling and small fish, traveling to the space station will help advance our body of scientific knowledge about the influence of microgravity on cells. Model organisms are non-human species with characteristics that allow them easily to be maintained, reproduced and studied in a laboratory. Taking these organisms to space allows for examination of growth and development and physiological, psychological and aging processes without the impact of gravity.”

The crew for the ISS-41/42 mission will be aboard the Station for 168 days, returning in March of 2015. Wilmore will be the Expedition 41 commander with Samoukutyaev and Serova serving as flight engineers. Alexander Samokutyaev, RSA, was a flight engineer for the ISS long duration Expedition 27/28 missions. He also served as the Soyuz TMA-21 commander. He was selected as a cosmonaut in June of 2003. This will be his second flight to orbit.

NASA’s Barry Wilmore completed his first flight as pilot on the space shuttle’s STS-129 mission onboard Discovery. This was the 31st shuttle flight to the ISS. Wilmore has logged more than 259 hours in space. This will be his second space flight. Wilmore is scheduled to take over command of the station in November of this year when the current Expedition 40/41 returns to Earth.

“We do science and various other things on the space station for the betterment of mankind,” Wilmore said in a recent interview. “That’s why the station exists, so we can turn around what we learn there and use it here on Earth – that’s our purpose. To go and have the opportunity to do that – is very humbling.”

Elena Serova, RSA, will be the first Russian woman in space in about two decades and will be conducting her first journey  as a flight engineer during the ISS 41/42 mission. In 2011, she was assigned to the Energia Rocket/Space Corporation Cosmonaut Corps as a cosmonaut candidate. By February of 2007, Serova began a two-year course consisting of basic spaceflight training. In June 2009, she was certified as a test cosmonaut and since 2011 she is a test cosmonaut of the Roscosmos Cosmonaut Corps. For her part, Serova detailed elements about what helped form and maintain her desire to become a cosmonaut.

“Most of all, I want to perform my work with great quality, and I want to stand up for the people who helped me prepare for this mission,” Serova said via a translator during a recent interview. “Since I was a child – I was very interested in space. Everything that related to space exploration.”

The spacecraft will dock to the Poisk module of the Russian segment of the station at 10:16 p.m. and around 11:55 p.m. hatches between the Soyuz and station will open. Live coverage of the docking will begin at 9:45 p.m. on NASA TV. Hatch opening coverage and greeting of the two separate crews will begin at 11:30 p.m. An Orthodox priest blesses members of the media at the Baikonur Cosmodrome launch pad on Wednesday, Sept. 24, 2014, in Kazakhstan. Launch of the Soyuz rocket is scheduled for Sept. 26 and will carry Expedition 41 Soyuz Commander Alexander Samokutyaev of the Russian Federal Space Agency (Roscosmos), Flight Engineer Barry Wilmore of NASA, and Flight Engineer Elena Serova of Roscosmos into orbit to begin their five and a half month mission on the International Space Station. Photo Credit: Aubrey Gemignani / NASA

The crew will perform over 50 experiments in the Russian segment of the station, handle three Russian resupply spacecraft, and take a spacewalk. The spacewalk will be performed by Alexander Samoukutyaev, and current ISS crew member Maksim Surayev.

The flight of Soyuz TMA-14M’s to the International Space Station will be the 123rd since 1967. The Russian spacecraft is expected to remain on board the ISS as an emergency escape vehicle.