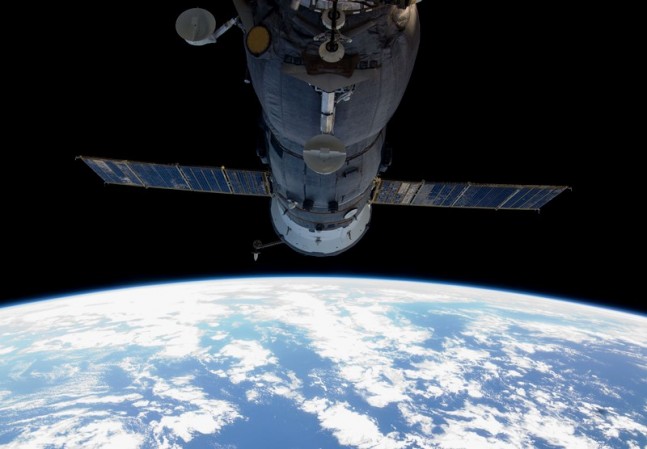 Three Expedition 41 crew members – are back home. After departing from the International Space Station (ISS ), a European Space Agency (ESA ) astronaut, cosmonaut and NASA astronaut conducted a fiery plunge through Earth’s atmosphere on Sunday, Nov. 9. Consisting of ESA’s Alexander Gerst, Roscosmos’ Maxim Suraev and NASA’s Reid Wiseman touched down northeast of the remote town of Arkalykat at 10:58 p.m. (9:58 a.m. Nov. 10 Kazakh time). The trio spent 165 days in space since they were launched to orbit from the Baikonur Cosmodrone also located in Kazakhstan on May 29.

The three space-flyers return home after their Soyuz TMA-13M spacecraft disembarked from the ISS at 7:31 p.m. EDT (0031 GMT), with the reentry module arcing a white-hot trail across the stratosphere. Conditions on the ground were chilly, with temperatures around 20 degrees and  with clouds obscuring the landing which was by all accounts: “flawless.” Within just a few months, tensions between Russia and the United States placed the future of the 16-nation project in doubt. With Russia’s military actions in the Crimea, the U.S. imposed an array of sanctions which caused Russian Deputy Prime Minister Dmitry Rogozin stated that U.S. use of Russian-made rocket engines could not be used for Department of Defense missions, that Russia would discontinue cooperating on the ISS in 2020 – and other, various threats.

Things appear to have calmed down since then and the situation has gone back to normal (relatively speaking).

Given that seats on board Soyuz run an estimated $70 million a seat, NASA has been working to have U.S. commercial companies take over the responsibility of delivering cargo and crews to the International Space Station. At least some of that effort has experienced difficulties of late.

Video courtesy of Inside ISS

Politics and trends not withstanding, the six (now three) person crew on the station have being working to conduct a wide range of science experiments. In the end, the station cannot operate without the various partners collaborating with one another. While one segment of an ISS Expedition has returned home, yet another is getting ready to ride fire aloft. Expedition 42 crew members, ESA astronaut Samantha Cristoforetti, NASA’s Terry Virts and Roscosmos’ Anton Shkaplerov will ride the Soyuz 41 rocket

Launching on the Soyuz 41 launch vehicle from the Baikonur Cosmodrome, Kazakhstan, the booster will take the trio on the first leg of a journey that is scheduled to last six months. The fact that more than three years after the final space shuttle drew to a close – NASA is still unable to launch astronauts on its own.

While NASA is hoping to send crews to destinations beyond the orbit of Earth, it is depending on Boeing and Space Exploration Technologies (SpaceX ) to handle the transportation of crews to the microgravity research facility.

Shkaplerov took point, directing the spacecraft to carry out the plunge which put it on course for reentry and then, home. The Soyuz TMA-15M backed away from the Rassvet (Russian for “Dawn”) module right on time at 6:31 p.m. EDT (0031 GMT).

After this Soyuz left the so-called “keep out” sphere which surrounds the ISS, the spacecraft conducted a deorbit burn, which slowed the spacecraft approximately 180 miles (451 meters). This was just enough to allow Soyuz to stop falling “around” Earth – and start falling toward it. Commander Max Suraev holds up a sign, exultant in carrying out another safe landing back to Earth. Image Credit: NASA TV

Some 6 thrusters provided attitude control, helping finish the job that the parachutes started, slowed the craft at the most critical moment of descent. Just seconds before this pivotal event the heat shield which had protected the trio from the extreme temperatures of descent – was jettisoned.

The crew, weakened by their stay on orbit, were carried from their spacecraft and deposited into chairs nearby. Despite the chagrin of many in NASA, past arrivals were celebrated with the flow of vodka. Given that the crew had traveled an estimated 70 million miles – perhaps a celebration was in order. Shortly afterward they were transported to an inflatable medical tent.

Recovery crews arrived just a short period after the crew touched down and began the process of reintroducing them to life on Earth after their six-month stint on orbit. It is at this point that the crew separated with Wiseman, Gerst and Suraev going their separate ways. Wiseman and Gerst will initially be sent to Scotland, before Gerst heads to the European Astronaut Center located in Koln, Germany – with Wiseman traveling to Johnson Space Center in Texas. Suraev to Star City located near Moscow.

One aspect of scientific research that Expedition 41 conducted was human health management for long duration space travel. The test comes at a time when both NASA and Roscosmos are planning year long stays aboard the ISS starting next year.

“It went well, nominal for us, for me, my first trip into space,” Gerst said. “…great team with our leader, Max. Thank you for your support everybody!”

Will no one mention the Commander’s favorite team? http://www.hctraktor.org/