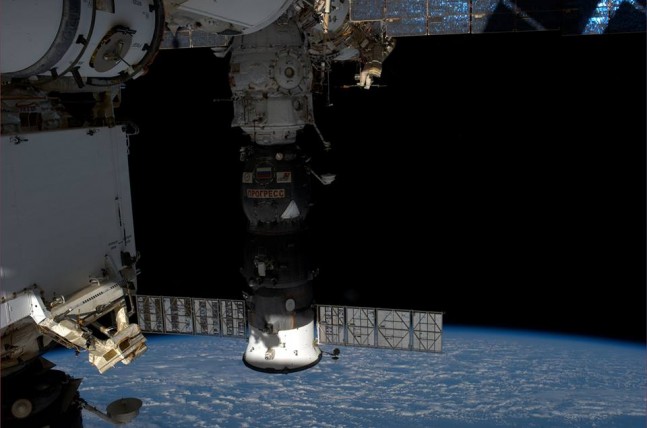 The 180th spacewalk or extra-vehicular activity (EVA) in support of the International Space Station (ISS), and the first for the Expedition 40 crew, was successfully completed yesterday (June 19) by Russian cosmonauts Alexander Skvortsov and Oleg Artemyev. This 7 hour and 23 minute excursion saw the installation of new equipment for the ISS along with work on several ongoing scientific experiments.

All of the work for this EVA took place around the Russian-made Zvezda Service Module, which contains the primary life support systems for the ISS. The main technical facet of this EVA involved the installation of a communications system antenna to Zvezda’s conical section, the area which connects the modules large and small segments. This installation took a few hours to complete and involved cable connections, removing protective coverings from components, and documentation of the cosmonaut’s work with photography.

The cosmonauts then worked on the hardware relocation of the Obstanovka experiment, which studies the magnetic environments and levels of plasma energy around the ISS. This ongoing experiment is studying the density of electromagnetic, electrostatic and magnetic fields  in low-Earth orbit (LEO), and looking for any effects that a electromagnetic environment (EVE) can impose on large spacecraft.

Work was then performed on two Japan Aerospace Exploration Agency’s experiments involving the acquisition of space environment data. The Micro-Particle Capturer (MPAC) device, which collects orbiting micro-particles by trapping them on gold plates located underneath silica-aerogel, and the Space Environment Exposure Device (SEED) that exposes material to the high energy radiation, temperature fluctuations, and other conditions found in LEO, to study potential weakening and degradation on tested material.

Preparing the Zvezda module for future work was the final component to this EVA, which involved the relocation of a payload cargo boom allowing for succeeding payload attachments to be manipulated when necessary. The last EVA performed for the ISS was completed by astronauts Steve Swanson and Rick Mastracchio on April 23, when they installed a replacement Multiplexer/Demultiplexer backup computer on the S0 truss that had experienced an unforeseen failure.