Expedition 40 crew is set to launch 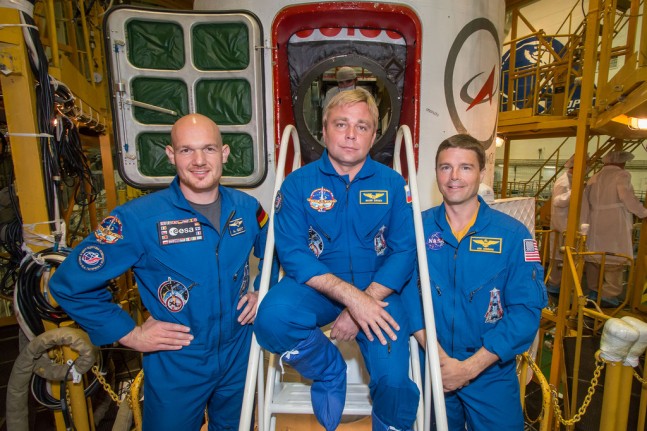 In a little over twenty-four hours, the Expedition 40 crew members currently aboard the International Space Station (ISS) will welcome three new crew mates. NASA astronaut Reid Wiseman, cosmonaut Maxin Suarev and European Space Agency astronaut (ESA) Alexander Gerst will launch aboard the Soyuz TMA-13M for a five and a half month mission.

The current crew of NASA astronaut and commander Steve Swanson along with cosmonauts Alexander Skvortsov and Oleg Artemyev have spent the last week performing station maintenance as well as science experiments in anticipation of the crew’s arrival on Friday. Swanson participated in two main science experiments: the Skin-B investigation, an analysis of rapid skin aging in space as compared to the effects microgravity has on other internal organs, and the Sprint VO2 experiment, an intense cardiovascular resistance program spanning three days as opposed to six days of workouts. Astronauts exercise in space to counteract bone and muscle loss occurring in microgravity. Also Swanson cared for growing lettuce plants as part of the Veggie (VEG-01) investigation. Cosmonauts Skyortsov and Artemyev conducted an experiment on to determine the location and risk of particle impacts on the ISS as well as station maintenance.

The crew arrived at the Baikonur launch site two weeks ago in order to prep for their mission. While in Kazakhstan, the trio took part in some unusual traditions in preparation for Wednesday’s launch. Reid Wiseman, Alexander Gerst and Maxim Suarev are set to launch Wednesday May 28, 2014 at 3:57pm EDT (1:57 a.m. May 29 Baikonur time) with Maxin as the Soyuz commander.

In order to prepare the crew for weightlessness, doctors have been spinning the trio around in chairs and sleeping in beds with their heads tilted downward. Most astronauts experience space sickness during the very beginning of their mission and their bodies will have to adjust to weightlessness very quickly after launch in order to control the Soyuz. Organs such as the brain receive conflicting information while first experiencing weightlessness, so these preparations may seem silly but are necessary.

The crew has had limited contact with people as they make their final preparations and are quarantined prior to launch. This is an important safety precaution as these men have been training for years for this flight and do not want to run the risk of any potential setback – something as simple as a cold could jeopardize the entire mission. Expedition 40 crew carries on the tradition of tree planting prior to launch. Photo Credit: ESA

The Expedition 40/41 crew will be staying at the “cosmonaut hotel” starting this evening and will sign the door as they head towards the launch pad. They each planted a tree behind the hotel as a living legacy and finally before launch will watch the classic Russian film, White Sun of the Desert.  Earlier today, as a final precaution, a Russian Orthodox priest blessed the mission.

On launch day, the bus will take Wiseman, Gerst and Suarev to the launch site. Before arriving at the site, the crew will make a quick pit stop on the side of the road to relieve themselves, following in Yuri Gargarin’s footsteps. The crew will spend two hours in the cockpit of the Soyuz completing final preparations prior to launch.

This flight marks the first launch since Russian sanction put a strain on America’s space partnership with Russia. Deputy Prime Minister, Dmitry Rogozin, has not yet commented on the launch. America’s relationship with Russia has been under duress in wake of the Ukraine crisis. Rogozin warned that Russia could stop cooperating with the U.S. in 2020.

NASA astronaut Reid Wiseman completed astronaut training in 2011 and this flight will be his first into space. Prior to launch he was been working at NASA’s Johnson Space Center as an International Space Station Capsule Communicator (CAPCOM). ESA astronaut Alexander Gerst was selected by ESA in 2009 and completed his training in 2011 and this flight will also be his first flight into space.

Cosmonaut Maxim Suraev is a veteran cosmonaut, having completed advanced ISS training in 2000. He launched in 2009 as commander of the Soyuz TMA-16 as served as flight engineer on Expedition 21/22. He helped complete the integration of the MRM-2 module into the Russian segment, performing a 5 hour 44 minute spacewalk. Suraev has logged over 169 days in space and will assume command of Expedition 41 later this year. Less than six hours after launch, at 9:48 p.m. EDT (1:48 a.m. GMT), Suraev will dock the Soyuz to the Rassvet module on the Earth-facing side of the ISS. Commander Steve Swanson and Flight Engineers Oleg Artmyev and Alexander Skortsov will open the hatch at 11:25 p.m. EDT (3:25 a.m. GMT) and welcome aboard the new crew members.