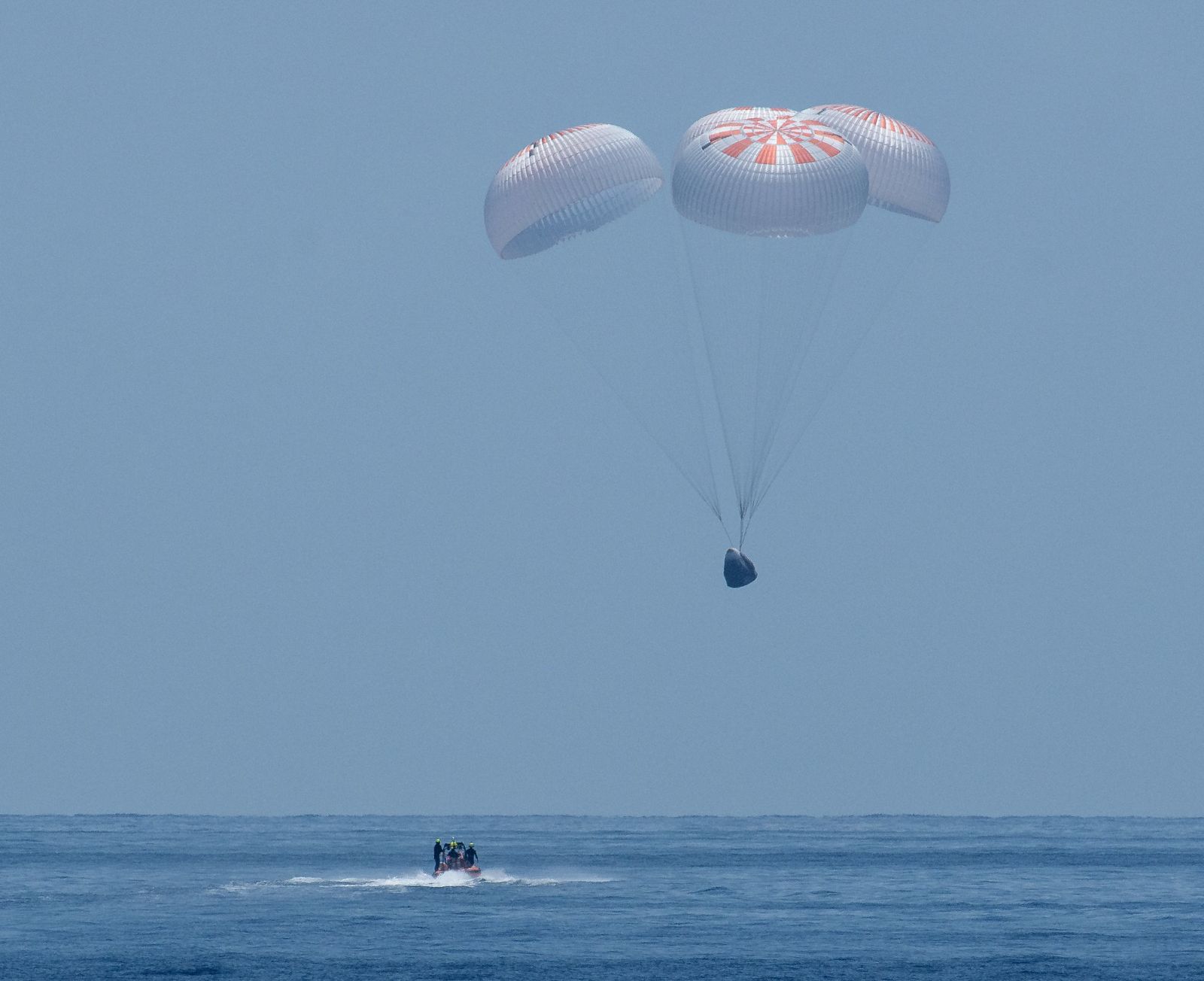 After two months aboard the International Space Station, Dragonship Endeavour with its two-person astronaut crew is back on Earth, having splashed down in the Gulf of Mexico off the coast of Florida.

SpaceX’s Demo-2 Crew Dragon mission splashed down off the coast of Pensacola, Florida, with NASA astronauts Doug Hurley and Bob Behnken at 18:48 UTC Aug. 2. Just 19 hours before, the spacecraft undocked from the ISS, concluding the duo’s 62-day stay aboard the outpost.

A splashdown off the coast of Cape Canaveral, Florida, would have been the target. However, with Hurricane Isaias moving up the eastern coast of the state, that wasn’t possible. As such Pensacola was chosen with a backup site located off the shores of Panama City. 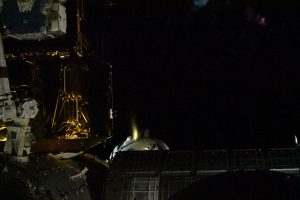 A view of Crew Dragon Demo-2 undocking from the ISS as seen by station commander Chris Cassidy. Photo Credit: NASA

For the duration of their mission aboard the ISS, the Demo-2 crew was part of the station’s Expedition 63 increment, which included NASA astronaut and ISS commander Chris Cassidy and Russian cosmonauts Anatoli Ivanishin and Ivan Vagner.

“It’s been an honor and a privilege to be part of Expedition 63 with you, Anatoli and Ivan,” Hurley said a few minutes after undocking. “It’s been a great two months and we appreciate all you’ve done as a crew to help us prove out Dragon on its maiden flight.”

Hurley also thanked the NASA teams in Houston and the SpaceX teams in Hawthorne, California, for their work to ensure a successful docked mission.

“I’d also like to wish you [the Expedition 63 crew] a great success on the rest of your expedition and a safe flight home in the fall,” Hurley said. “Take care friends.”

Cassidy said he wholeheartedly agreed with both of Hurley’s sentiments.

“It’s been an honor to serve with you,” Cassidy said. “Safe travels and have a successful landing. Endeavour’s a great ship. Godspeed.” 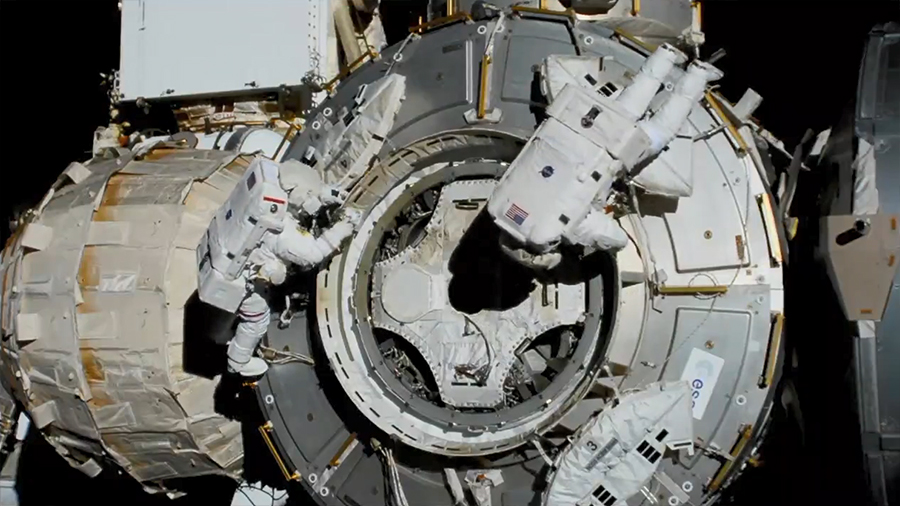 During the course of the Demo-2 mission, including its time docked at the ISS, a number of evaluations were performed on the Crew Dragon spacecraft. These included, but were not limited to, tasks such as monitoring the health of the solar cells, understanding a four-person habitability configuration (with help from the other members of the Expedition 63 crew) and a 24-hour safe-haven evaluation. 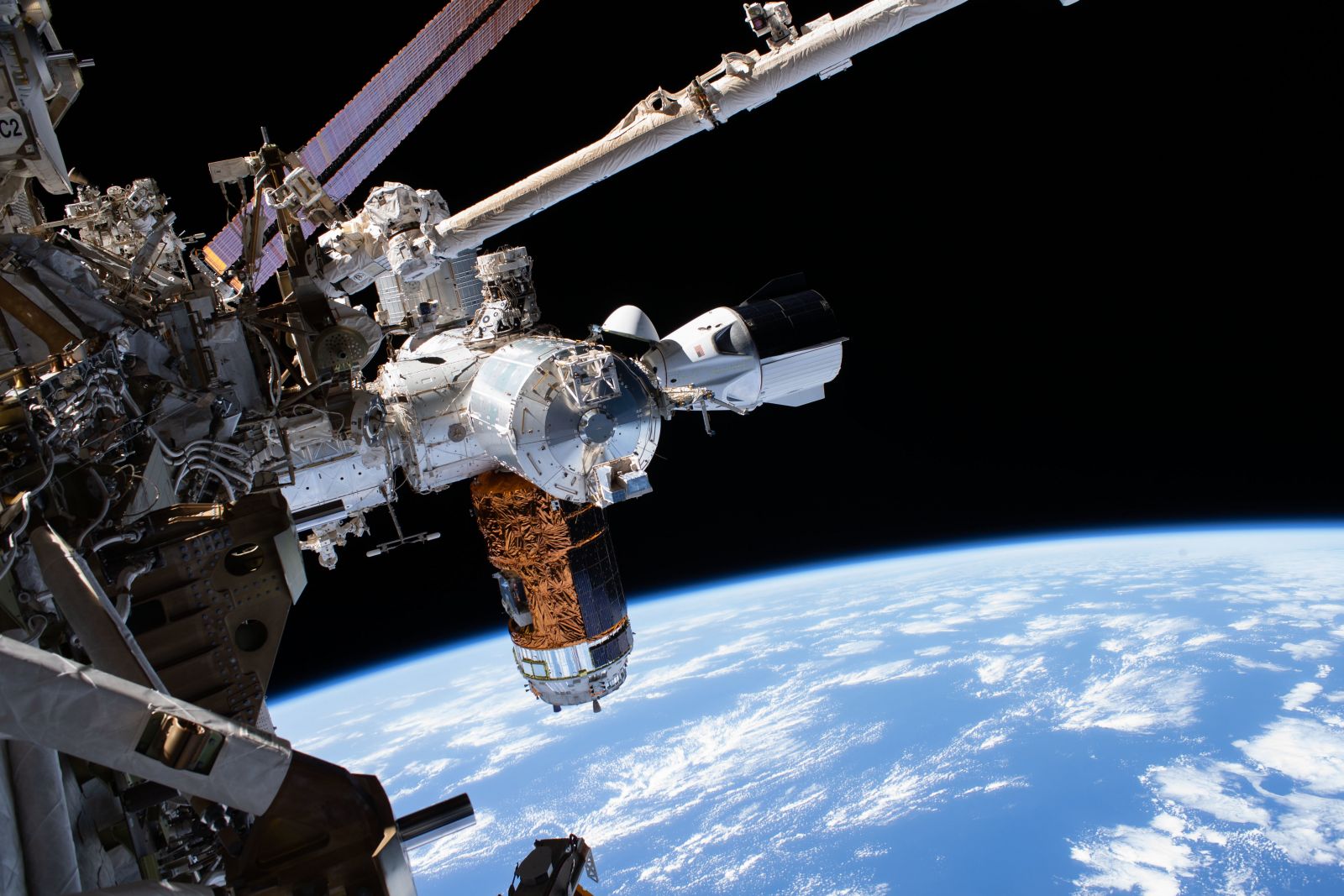 A view of the Crew Dragon spacecraft as seen by the spacewalking astronauts during an outing earlier in July. Credit: NASA

Additionally, Hurley and Behnken helped the Expedition 63 crew with various tasks including 100 hours of additional science, according to NASA.

Perhaps the biggest help from the Demo-2 crew came in the form of four critical spacewalks in late June and throughout July. These involved Behnken and Cassidy suiting up in Extravehicular Mobility Units — NASA’s spacesuit design — and venturing outside the Quest airlock to begin the final series of battery replacements.

The project, which started in January 2017 during the Expedition 50 crew, required a series of four spacewalks to be performed to replace 48 nickel-hydrogen batteries on the integrated truss segment with 24 more-efficient lithium-ion units. In sets of six, the batteries were launched to the ISS via four Japanese Kounotori spacecraft.

Additionally, work began on preparing several areas around the complex for additional solar arrays, which are expected to be brought to the ISS over the next few years. 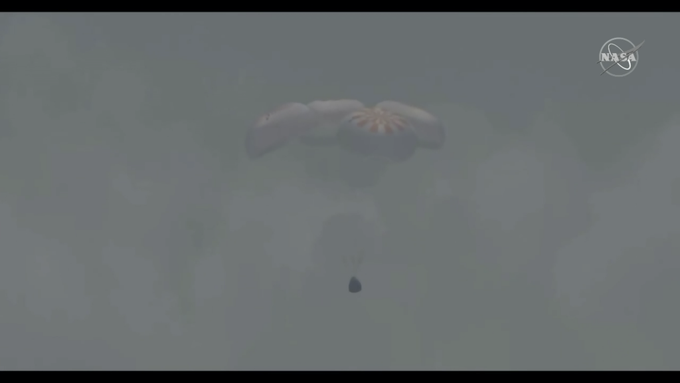 With the mission time at the ISS complete, Crew Dragon undocked at about 23:35 UTC Aug. 1. Following four departure burns over the course of just under two hours, Crew Dragon slowly moved away from the ISS and out of both its 200-meter “keep-out sphere” and larger “approach ellipsoid.” Both are imaginary boundaries within which vehicles have to be highly choreographed in order to safely fly in the vicinity of the outpost.

The next day, Hurley and Behnken began preparing for the deorbit burn, culminating in reentry and splashdown. The first major milestone was the jettison of the trunk, which contained the spacecraft’s radiators and solar cells around its circumference. This occurred at about 17:51 UTC. 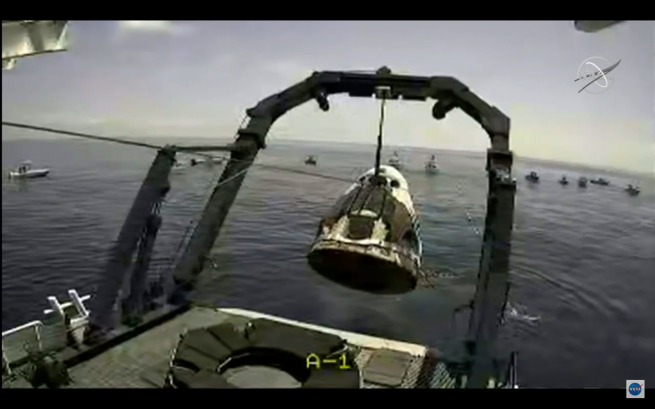 Within a half hour of splashdown, the Crew Dragon spacecraft was brought aboard the recovery vessel. Credit: NASA

Next, a 11.5-minute deorbit burn was performed using the four forward Draco thrusters, located around the docking ring. This slowed the capsule down enough for its orbit to intersect with the atmosphere at the right place to target a splashdown off the coast of Florida.

Following the burn, the four thrusters in the front were no longer needed. As such, the articulating nose cone was closed to protect the docking mechanism. This also blocks those thrusters, wihtout impeding the sidewall Dracos which were to be used for attitude control for the duration of the coast toward reentry.

During reentry, as the plasma built up around the capsule, communications with the crew were lost, as expected. This communications blackout lasted for several minutes before being regained.

Once the capsule reached about 5,500 meters above the Gulf of Mexico, the two drogue parachutes were deployed, slowing the capsule enough to allow for the main parachutes to deploy at roughly 1,800 meters.

From there, it was a slow descent of about 25 kilometers per hour to the water’s surface.

An areal view of the splashdown recovery area with at least a dozen private, wayward boats close to the capsule. Credit: NASA

Interestingly, this was the first U.S. splashdown since the final Apollo flight in July 1975 with the return of the crew of the Apollo-Soyuz test project.

Following splashdown, it was the job of the SpaceX’s Go Navigator recovery ship and its crew to get in close and bring the vehicle aboard the deck of the vessel to allow Hurley and Behnken to disembark. 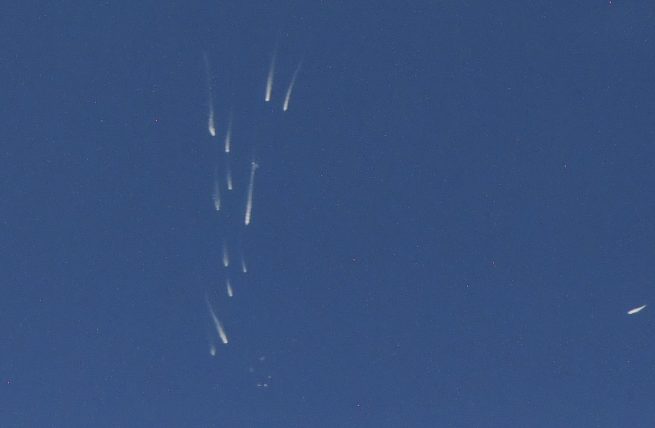 A view of the private boats closing in on the Crew Dragon recovery area as seen from orbit at the International Space Station. Credit: Ivan Vagner / Roscosmos

During this process, however, at least a dozen wayward boats began to encroach on the area, despite the restrictions. It is estimated that many of them were operating within approximately 150 meters – distractedly and potentially dangerously close.

Once the capsule was aboard the recovery ship, teams detected some nitrogen tetroxide propellant outside the capsule. This prompted teams to spend extra time to purge the spacecraft’s propulsion system to ensure exposure limits were within safe margins.

Overall, the capsule was on the recovery ship within 30 minutes of splashdown. It took about 30-40 minutes of extra time to purge the area before SpaceX gave the go to open the hatch and get Hurley and Behnken out.

Once outside the capsule, the two astronauts were taken to a medical room aboard the ship. They’ll eventually be transferred by helicopter from the ship, being flown to nearby Pensacola. From there, they are expected to board a NASA plane, destined for Johnson Space Center in Houston.

It’s now down to mission managers and engineers from NASA and SpaceX to pore over the data to ensure that the vehicle performed as expected. This is expected to take up to six weeks. 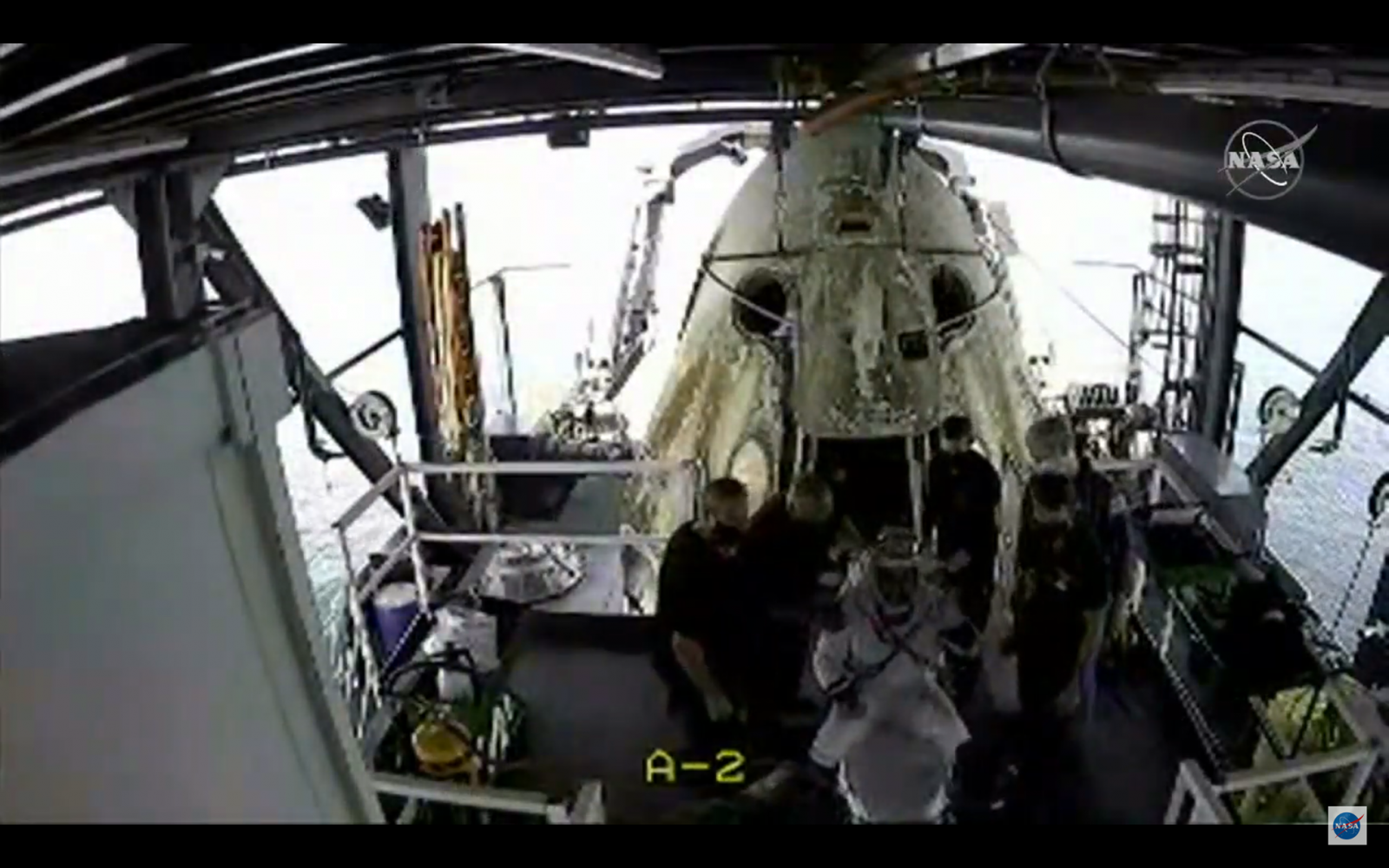 The Demo-2 crew was helped out of their spacecraft once the hatch was open aboard the recovery vessel. Credit: NASA

In the meantime, Crew-1 — the first operation mission of the spacecraft — is expected to be ready for launch to the space station with four astronauts as soon as late-September.

The astronauts — NASA’s Michael Hopkins, Victor Glover and Shannon Walker, as well as Japan’s Soichi Noguchi — are slated to join up with the space station’s Expedition 63 crew and transition to Expedition 64 later in October. 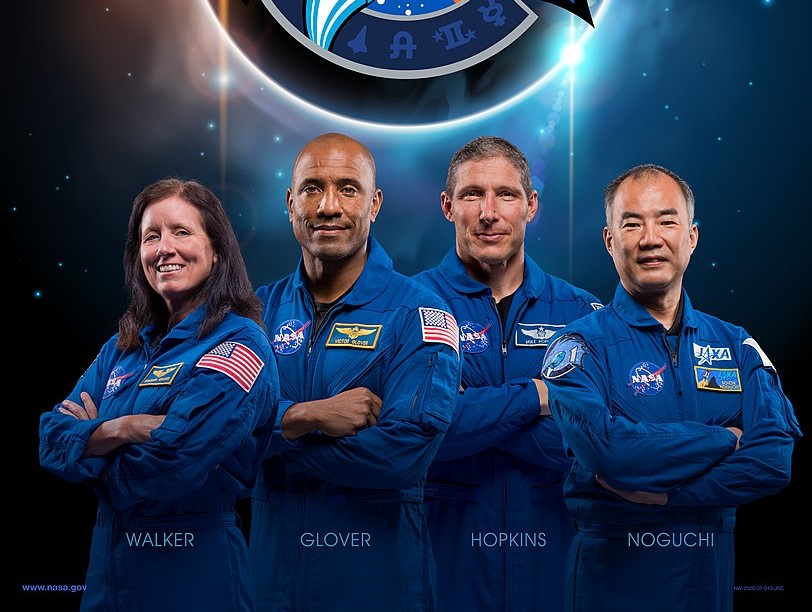 The astronauts selected for the Crew-1 mission, which is expected to launch no earlier than late September. Credit: NASA

Crew-1 is expected to remain aboard the ISS until around April. They will be replaced by the Crew-2 astronauts via a direct handover period, likely lasting around a week.

However, because of the dynamic visiting vehicle schedule, this is always subject to change.

Regardless, the Demo-2 mission has ended the gap in the United States’ independent access to the International Space Station, which began after the final space shuttle mission in July 2011. Crew Dragon and its capabilities are expected to be augmented next year by Boeing’s CST-100 Starliner.

The first uncrewed test flight of Starliner had a variety of problems that ultimately cut short its mission after a few days having not docked to the ISS. These issues, mostly software-related, are currently being addressed.

Once Starliner is operational, NASA will have two vehicles available to send astronauts to the ISS from the United States. Combined with the Russian Soyuz spacecraft, three different crewed vehicles will have the ability to send people to the station.