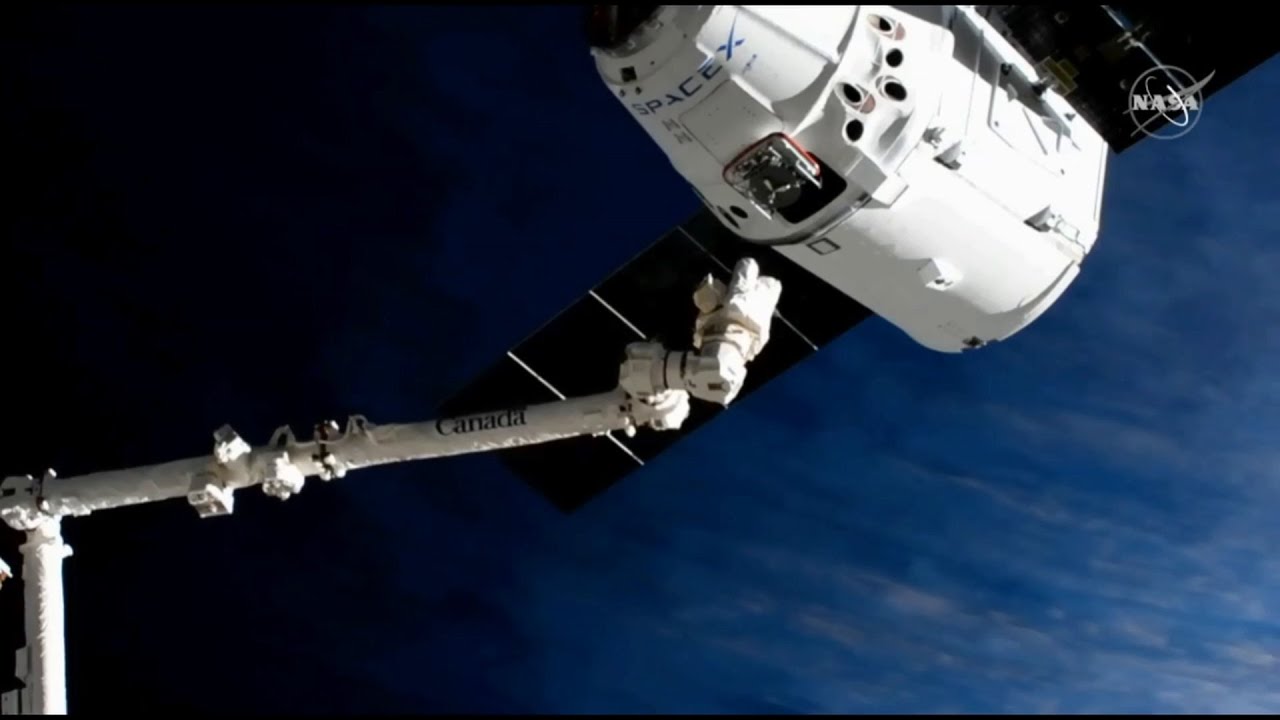 Days after threading the needle with weather to launch, SpaceX’s CRS-18 Dragon spacecraft rendezvoused and berthed with the International Space Station.

Carrying 2,312 kilograms of cargo, including a new docking adapter for commercial crew spacecraft, the capsule took two days to catch up to the space station and place itself about 10 meters beneath the Destiny module. Then Expedition 60 NASA astronauts Nick Hague and Christina Koch remotely commanded the robotic Canadarm2 to capture the spacecraft on Saturday July 27, 2019.

Following capture, teams on the ground then remotely commanded the arm to position Dragon just below the Earth-facing port of the Harmony module in preparation for berthing. The spacecraft was officially attached to the ISS at 12:01 p.m. EDT (16:01 UTC).

This is the third time this particular spacecraft has visited the ISS and is the first time that a thrice-flown Dragon has made its way into space, having been used for the CRS-6 and CRS-13 missions in April 2015 and December 2017, respectively. 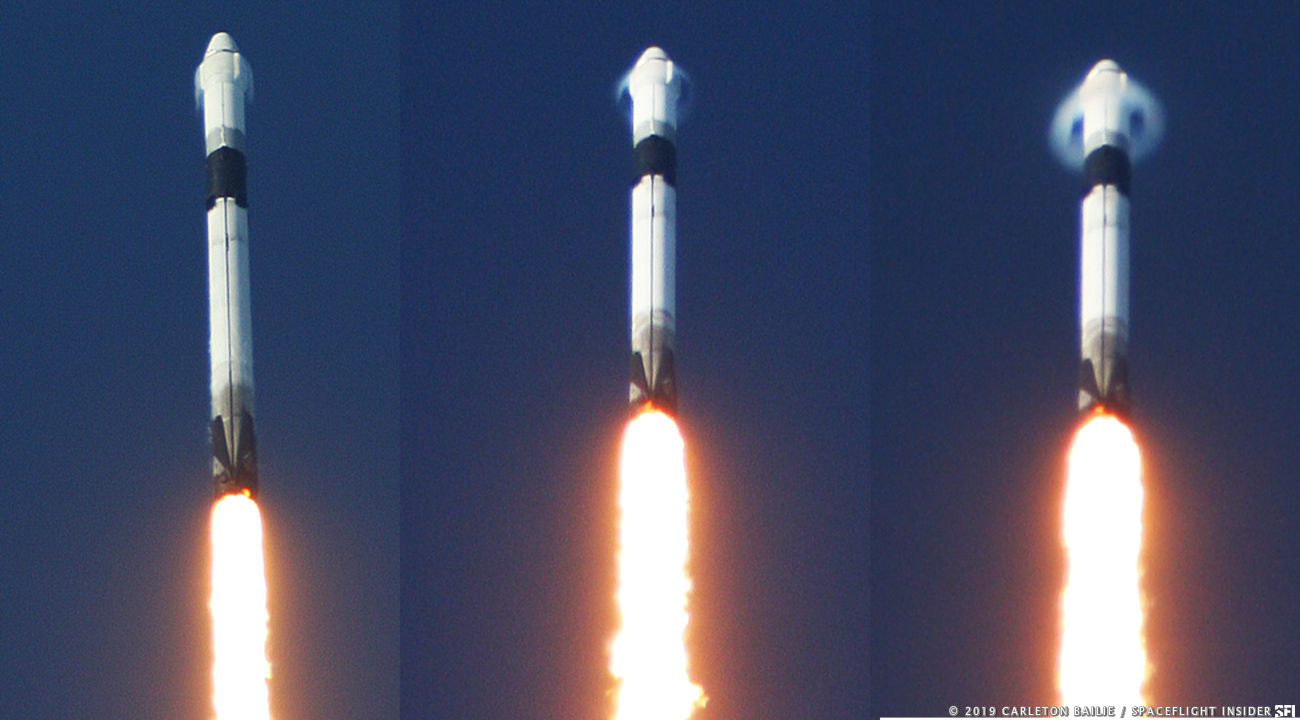 A shock collar forms around the Falcon 9 rocket used to launch the CRS-18 mission as it leaves the pad at SLC-40 in Florida. Photo Credit: Carleton Bailie / SpaceFlight Insider

According to NASA, the pressurized cargo in CRS-18 includes research and equipment such as the BioFabrication Facility, which is designed to print organ-like tissue in microgravity; and a Goodyear Tire Investigation, which hopes to better understand silica morphology for improved manufacturing and performance on the ground.

Also aboard is the Space Tango – Induced Stem Cells, investigation, which NASA says aims to observe culturing cells from patients with Parkinson’s disease and Multiple Sclerosis to “examine cell to cell interactions” in neurodegenerative diseases.

Possibly the most anticipated piece of hardware aboard CRS-18 is the third International Docking Adapter, also known as IDA-3, which is located in Dragon’s trunk. 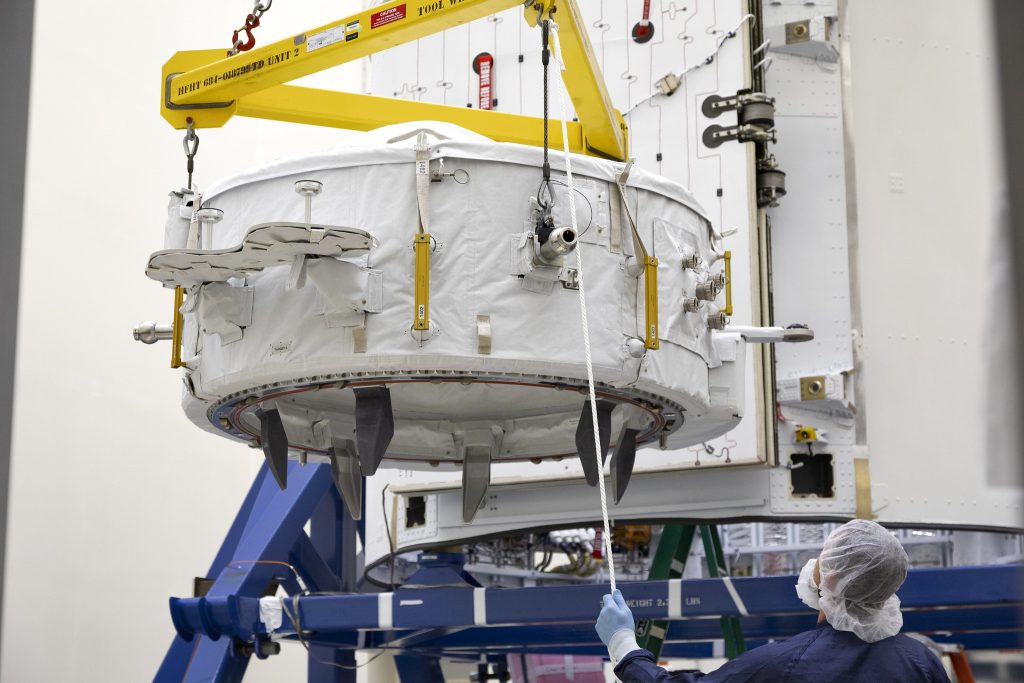 NASA’s Lunar Gateway, Orion spacecraft and future lunar landers for the agency’s Artemis program are all expected to utilize this docking standard.

IDA-3 is expected to be removed from the unpressurized trunk of Dragon sometime in August before being positioned in front of Pressurized Mating Adapter-3, which itself is located on the space-facing port of the Harmony module.

It will require at least one spacewalk by astronauts to finish the installation of the docking ring before it is certified for use by a commercial crew vehicle.

Having two at the ISS is expected to give not only redundancy in case a problem occurs, but the option for dual-docked commercial crew vehicles. This means expedition crews using these spacecraft can perform direct handovers to change personnel.

It also means privately procured spacecraft can dock for short periods of time with commercial astronauts, as NASA recently opened up the outpost for increased commercial activity.

According to Alan Boyle in a July GeekWire story, a NASA official said the first fully-private trip to the ISS could come as soon as October 2020 if Crew Dragon and Starliner, as well as paying customers, are ready.