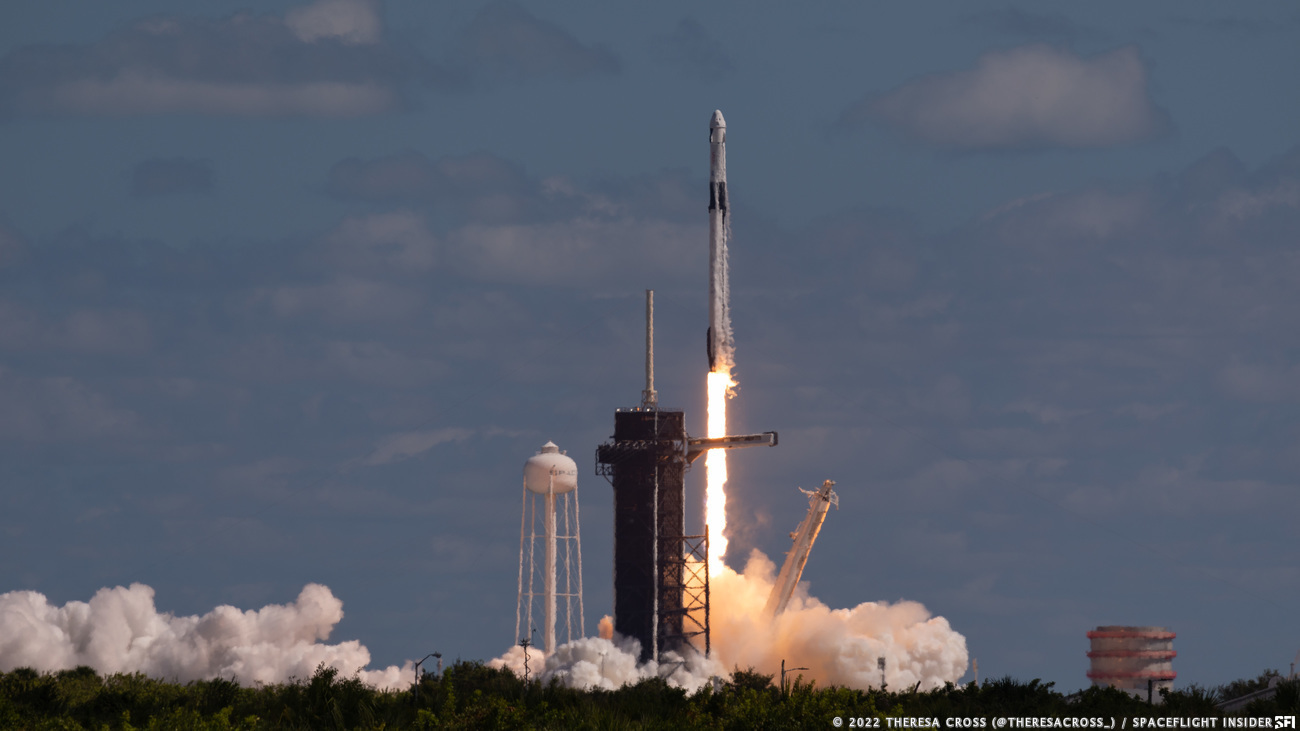 Crew-5 soars toward space with three astronauts and one cosmonaut. They are set to link up with the International Space Station on Oct. 6. Credit: Theresa Cross / Spaceflight Insider

Three astronauts and one cosmonaut are on their way to the International Space Station after launching to space atop a Falcon 9 rocket as part of the Crew-5 mission. 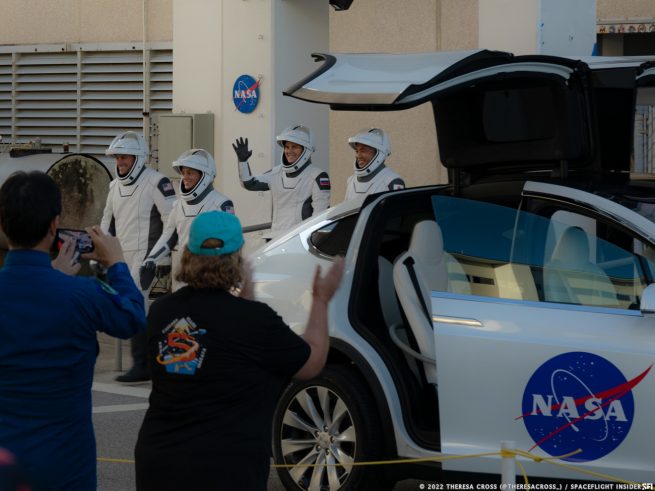 The Crew-5 astronauts and cosmonaut walk out of NASA’s Operations and Checkout Building to board a Tesla Model X, which then took them to Launch Complex 39A at Kennedy Space Center. Credit: Theresa Cross / Spaceflight Insider

“Missions like Crew-5 are proof we are living through a golden era of commercial space exploration. It’s a new era powered by the spirit of partnership, fueled by scientific ingenuity, and inspired by the quest for new discoveries,” said NASA Administrator Bill Nelson in a news release. “During their stay aboard the International Space Station, Crew-5 will conduct more than 200 science experiments and technology demonstrations, including studies on printing human organs in space and better understanding heart disease. While our eyes are focused upward on the heavens, let us never forget these missions will also better life here on Earth.”

Today’s launch is the fifth ISS crew rotation mission as part of the Commercial Crew Program using a SpaceX Dragon spacecraft. They are expected to arrive at the orbiting outpost about 29 hours after liftoff. Docking is scheduled for 4:57 p.m. EDT (20:57 UTC) Oct. 6. At that point, they’ll become part of the in-progress Expedition 68 space station crew.

The Crew Dragon capsule that flew in support of this mission previously flew the Crew-3 astronauts to and from the International Space Station between November 2021 and May 2022. After Falcon 9’s stage separation, the first stage, which was a new booster, landed on SpaceX’s drone ship “Just Read the Instructions” staged downrange in the Atlantic Ocean. 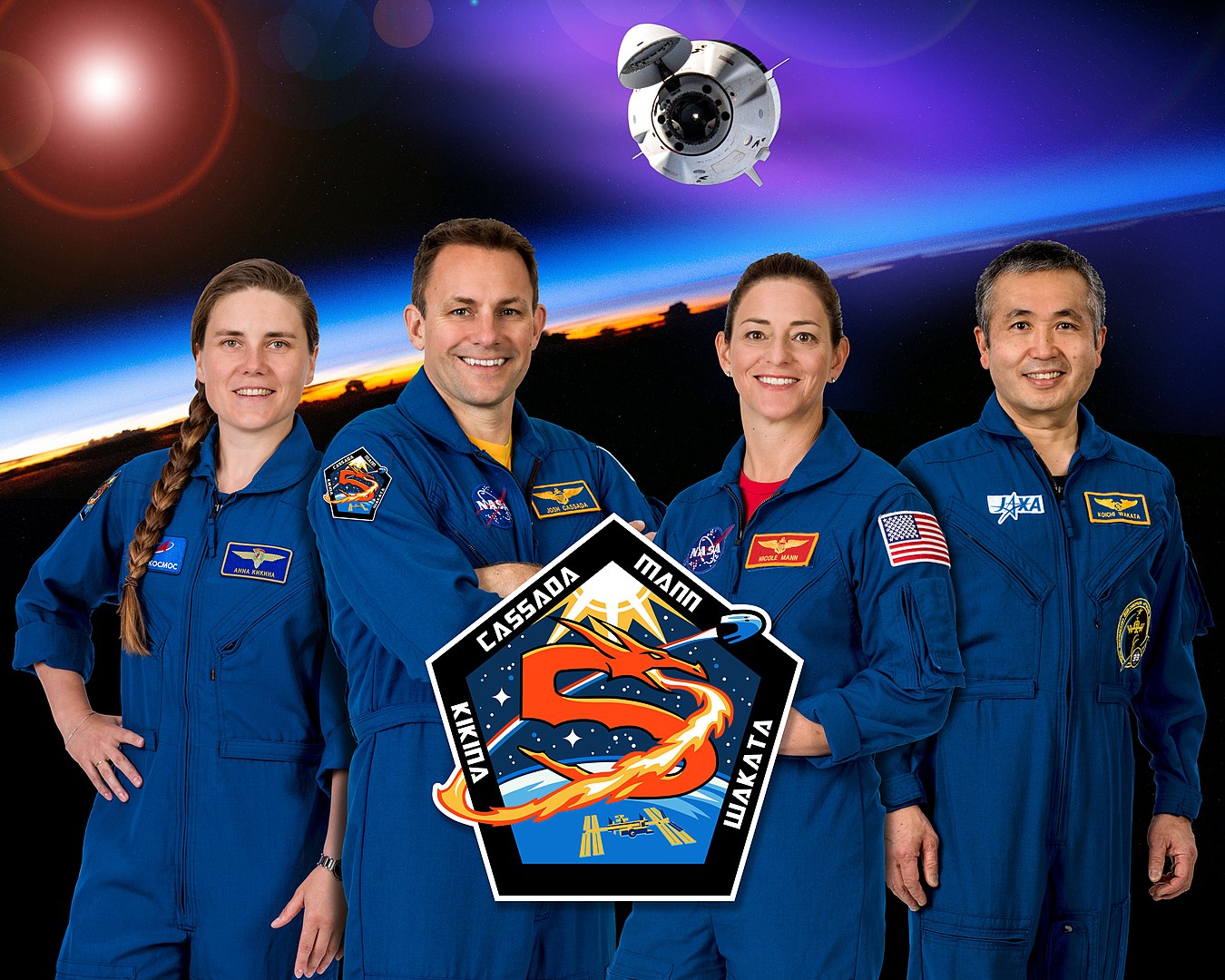 Mann, 45, is the first Native American woman to fly into space. She is a colonel in the U.S. Marine Corps and a test pilot for the F/A-18. She also has a master’s degree in mechanical engineering.

Cassada, 49, is a captain in the U.S. Navy. He also served as a test pilot and has a doctorate in high energy particle physics. Both he and Mann were selected by NASA to be astronauts in 2013.

Kikina is 38 years old and is only the fifth professional female cosmonaut to fly into space for Roscosmos. She was selected to be a cosmonaut in 2012 and assigned to the Crew-5 mission in 2021. 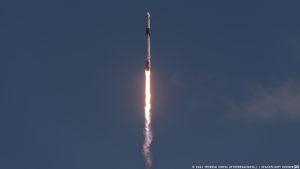 Crew-5 is the first time a Russian cosmonaut has flown in an American commercial spacecraft. Kikina and NASA astronaut Frank Rubio, who flew to orbit last month in Soyuz MS-22, are the first to participate in a “crew swap” agreement to ensure that at least one Russian cosmonaut and one NASA astronaut are present at the ISS at all times, even if there is a launch delay, or an on-orbit emergency.

While Mann, Cassada and Kikina are all on their first spaceflight, 59-year-old Wakata is a veteran of four previous missions. He flew into space during STS-72 in 1996, STS-92 in 2000 and was part of two long duration ISS missions in 2009 and between November 2013 and May 2014.

Overall, Wakata, who has a doctorate in aerospace engineering, spent 347 days in space before the Crew-5 mission, more than any other Japanese astronaut.

The Crew-5 flyers are set to replace the Crew-4 astronauts — NASA’s Kjell Lindgren, Bob Hines and Jessica Watkins, as well as the European Space Agency’s Samantha Cristoforetti — who have been aboard the ISS since April.

Crew-4 is expected to return to Earth in their Dragon spacecraft later this month. Crew 5, meanwhile, is expected to stay aboard the ISS until March 2023.