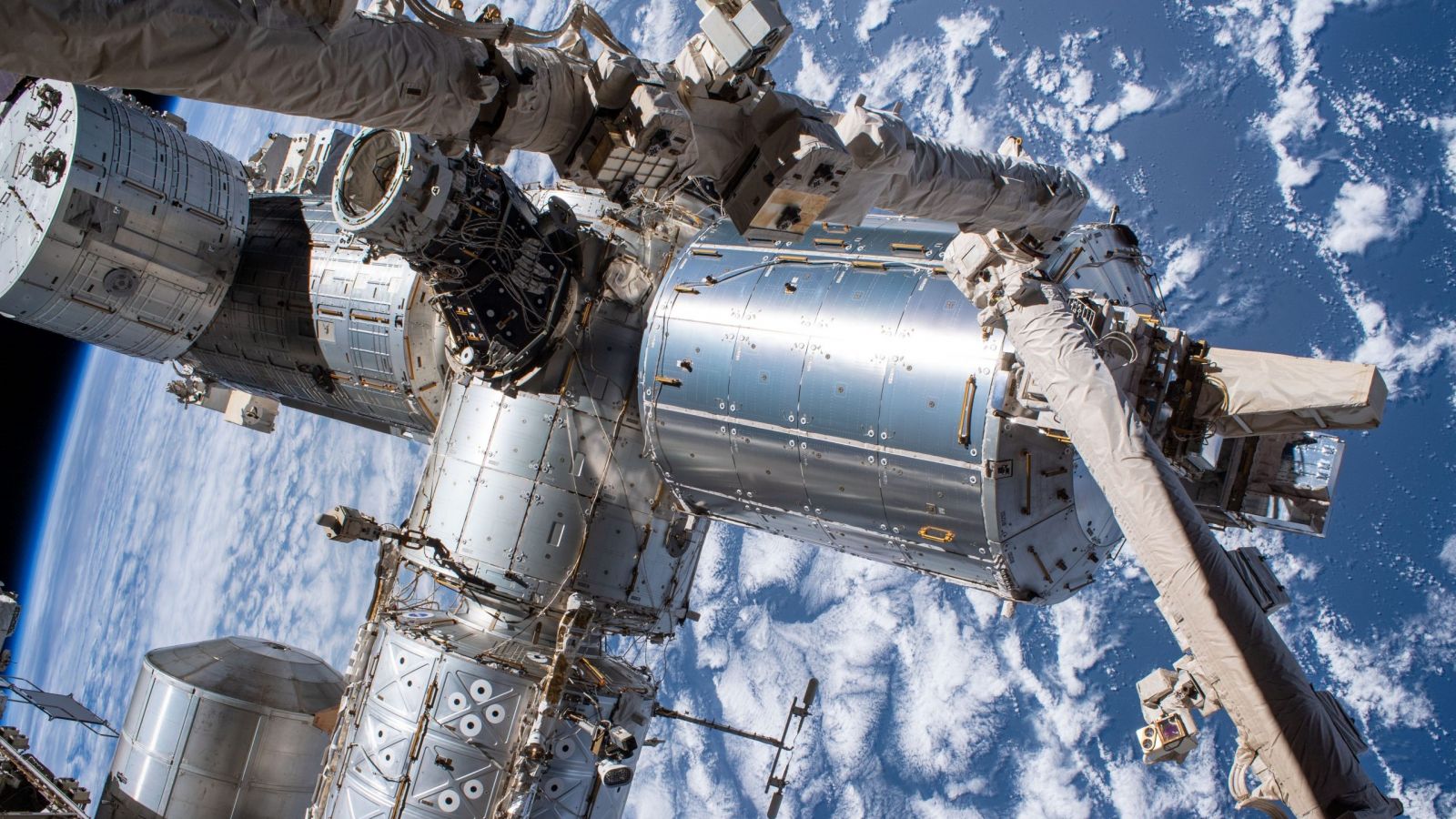 A view of the front of the International Space Station. The Bartolomeo platform, which was not yet installed when this photo was taken, is located on the forward side of the Columbus module. Credit: NASA

Two NASA astronauts performed the first spacewalk of 2021 at the International Space Station to connect cables to a new European science platform as well as prepare the outpost for future power upgrades.

Expedition 64 Flight Engineers and NASA astronauts Mike Hopkins and Victor Glover ventured outside the ISS for U.S. Extravehicular Activity 69 to perform final cable connections and install a Ka-band antenna on the Columbus module in order to fully activate the European Space Agency Bartolomeo experiment platform, which was brought to the outpost early last year.

They were supported on the inside of the ISS by two other members of the seven-person Expedition 64 crew, NASA astronaut Kate Rubins and Japan Aerospace Exploration Agency astronaut Soichi Noguchi.

Despite problems with cable connections, ground teams were able to troubleshoot the various issues and at least activate the antenna. The Ka-band antenna on Columbus will allow for a high-bandwidth communications link from Bartolomeo to European ground stations.

However, since not all of the cables were connected properly to Columbus, the Bartolomeo platform itself was not fully activated and the final tasks will have to be completed during another spacewalk. 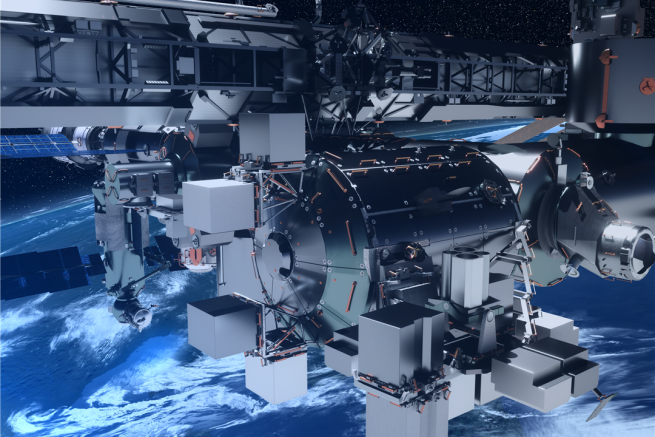 Artist’s rendering of the Bartolomeo platform attached to the ISS Columbus Module. The platform was brought to the ISS during SpaceX’s CRS-20 Dragon mission in April 2020. Credit: Airbus Defence and Space.

Hopkins was designated EV-1, the lead spacewalker, and wore the spacesuit, called an Extravehicular Mobility Unit, with red stripes. Glover, EV-2, wore the suit with no stripes.

The spacewalk officially started at 6:28 a.m. EST (11:28 a.m. UTC) Jan. 27, 2021, when the duo switched their spacesuits to battery power. At this point the Quest airlock had already been depressurized and the outer hatch opened.

Upon leaving the airlock, Hopkins brought out the Columbus Ka-band antenna box, or COLKa, and then passed it to Glover when he exited Quest.

Hopkins then made his way over to the worksite on the forward side of the Columbus module by using handrails across several other elements of the ISS.

Glover, however, got to take the scenic route. He translated to a nearby external platform to meet the 17.6-meter-long robotic Canadarm2. He then installed a foot restraint on the arm’s latching end effector in order to ingress onto it.

Together with COLKa, the arm, controlled by NASA astronaut Kate Rubins on the inside of the ISS, was moved to the worksite on Columbus. 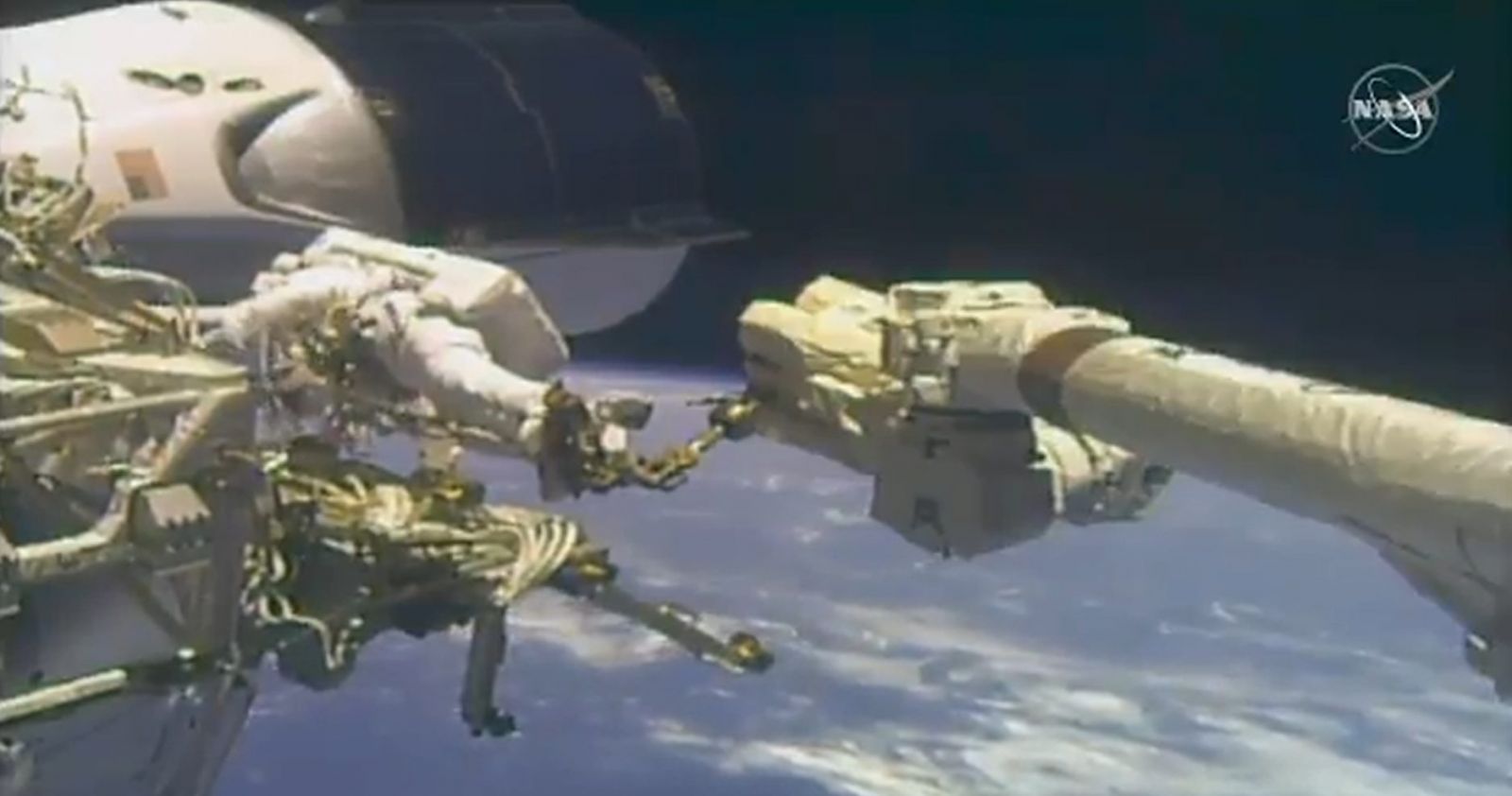 A view of the primary work area during U.S. EVA-69 as astronauts work to activate the Columbus Ka-band antenna and Bartolomeo platform. Credit: NASA

This is where problems began to crop up. Not only were cables having problems being plugged into their slots, the COLKa antenna did not respond as expected when ground teams began to turn on the device’s heaters.

Upon closer inspection, it appears that the cables were mating, but levers used to slide the backshell over the connection were only moving about halfway to their close point.

While ground teams worked to troubleshoot these two issues, the astronauts worked to remove the COLKa cover, which revealed the Ka-band antenna.

Glover, while still attached to the robotic arm, then grabbed the cover and Rubins moved the arm to a point below the ISS in order to jettison the now-not-needed paneling. This was done in such a way that it wouldn’t come back to hit the outpost.

The cover will eventually fall back into Earth’s atmosphere after several weeks or months due to atmospheric drag.

While Glover was doing this, Hopkins was tasked with getting wire ties in order to restrain the levers on the cable connectors from popping off. This was done by connecting the other end of the ties to a nearby handrail.

However, only four of the six cables required to fully activate the platform were connected and providing power. The other two were not yet attached and tied down in hopes there would be more time at the end of the spacewalk to come back and complete the task. However, it was ultimately deemed there wouldn’t be time.

The location of the six new solar arrays that are expected to be installed over the next several years. Credit: NASA

After this, Hopkins made his way back to the Quest airlock to meet Glover, who had egressed from the arm and worked on a minor get-ahead item, to begin the second major task of the spacewalk, removing an H-fixture on the far port-side truss of the ISS.

These H-fixtures, located on the mast canisters that contained part of the outpost’s massive solar arrays, were only used during pre-launch processing and aren’t needed anymore.

Instead, their removal will make room for new, more advanced solar panels to be attached to help augment the space station’s power.

These compact roll-out arrays will be brought to the ISS in pairs starting with the next SpaceX Dragon cargo mission, CRS-22, which is slated for May 2021.

Once the removal was done, the H-fixture was stowed in a bag and the duo made their way back to the Quest airlock to conclude the spacewalk.

The official end time was 1:24 p.m. EST (6:24 p.m. UTC), which was marked by the beginning of the repressurization of the airlock. The total time outside for Hopkins and Glover was 6 hours and 56 minutes.

Today’s outing was the 233rd in support of ISS assembly and maintenance since 1998. The total crew time outside the outpost now stands at 61 days, 1 hours and 47 minutes over the last 22 years.

This was Glover’s first spacewalk and Hopkins third, bringing his career spacewalk time to 19 hours and 54 minutes.

The next spacewalk, which will also involve Hopkins and Glover, is slated for Feb. 1. The primary task for U.S. EVA-70, at least before this outing’s issues, is expected to be the installation of the final lithium-ion battery and its adapter plate on the P4 truss.

Other tasks for the spacewalk are expected to include the removal of a grapple fixture bracket, the removal of an external camera and installation of a new high-definition camera on the Destiny laboratory and the replacement of components for the robotic arm on the Japanese Kibo module.

It is currently unclear if the Bartolomeo cable installation will be completed during next week’s spacewalk, or if mission managers will schedule that task for another EVA. The platform is currently in a safe configuration.

A third spacewalk is slated for Feb. 8 and is expected to see more work performed to prepare the ISS for the new solar arrays later this year. That outing will see Glover and Rubins venture outside.

Finally, if the schedule holds, a fourth spacewalk no earlier than Feb. 15 will see Rubins and Noguchi perform additional ISS upgrades. 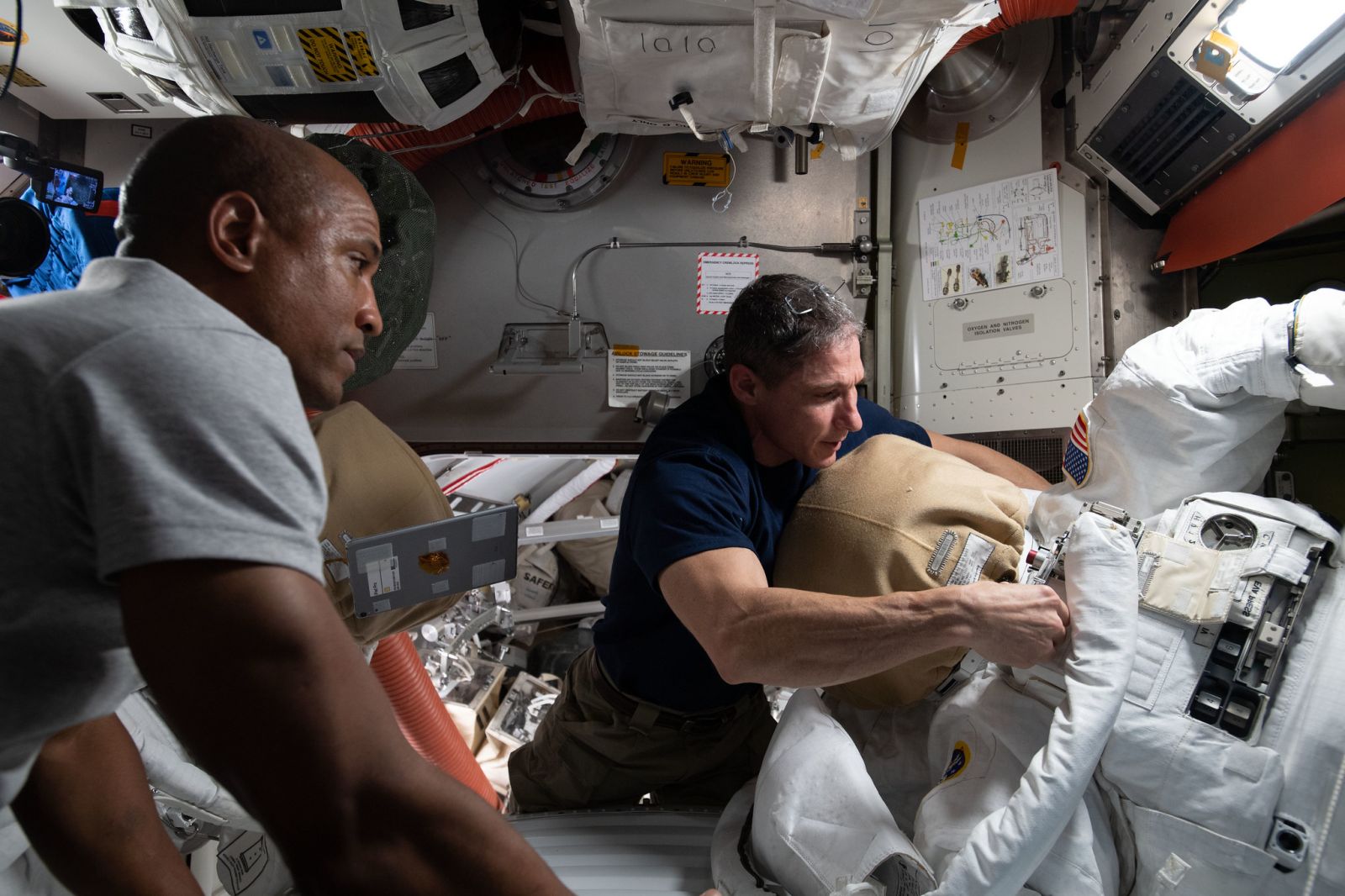