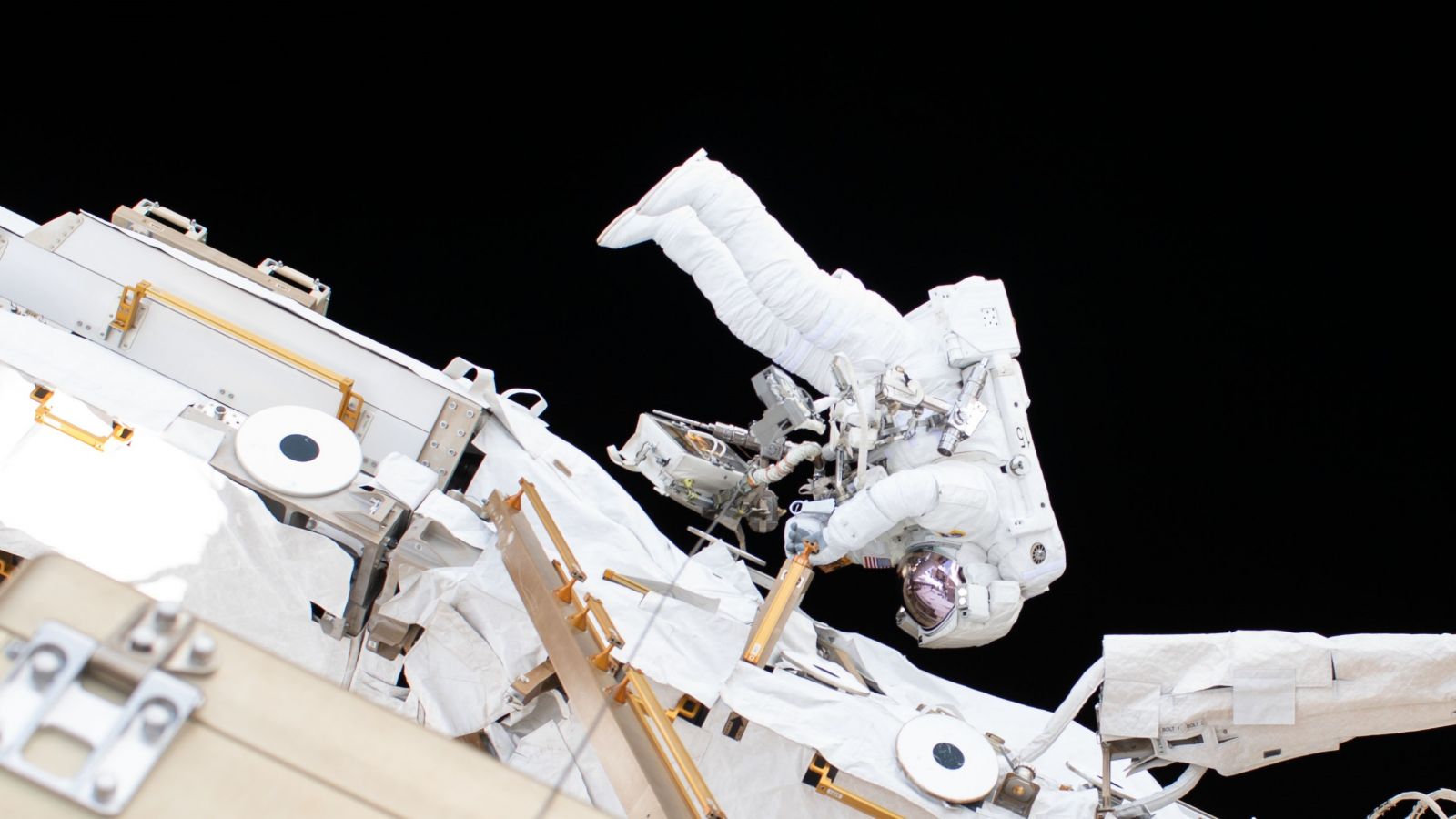 Nick Hague as seen during his first spacewalk on March 22, 2019. Photo Credit: NASA

The March 29, 2019, extravehicular activity was the second of three planed in less than a month and focused on installing three battery adapter plates and new lithium-ion units.

Expedition 59 Flight Engineer Hague took the place of NASA’s Anne McClain, who was initially planned to take part in the extravehicular activity, which would have been the first all-female spacewalk ever performed. 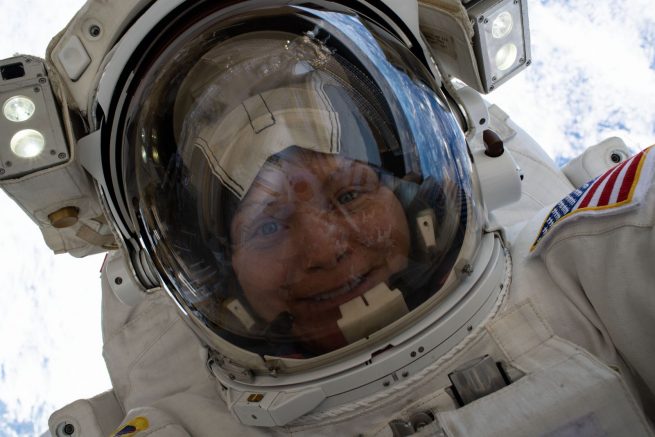 However, during last week’s spacewalk, McClain realized the medium torso she wore would have been a better fit, rather than the large she was expected to don for this EVA.

Because Koch was slated use that particular medium torso and another was not readily available, McClain recommended that Hague take her place and use the already-prepared large torso.

NASA said it would require some 12 hours of crew time to configure the other medium torso that was already aboard the outpost, but to keep with the timeline, it was opted by McClain to just swap places with Hague, who was initially planning to go outside during the next spacewalk on April 8.

“Leaders must make tough calls, and I am fortunate to work with a team who trusts my judgement,” McClain tweeted. “We must never accept a risk that can instead be mitigated. Safety of the crew and execution of the mission come first.”

Spacewalks are among the riskiest parts of spaceflight. According to NASA, in the more than 400 spacewalks since 1965, 20 percent have involved some form of significant incident ranging from injury due to fit issues, to water collecting in a helmet. 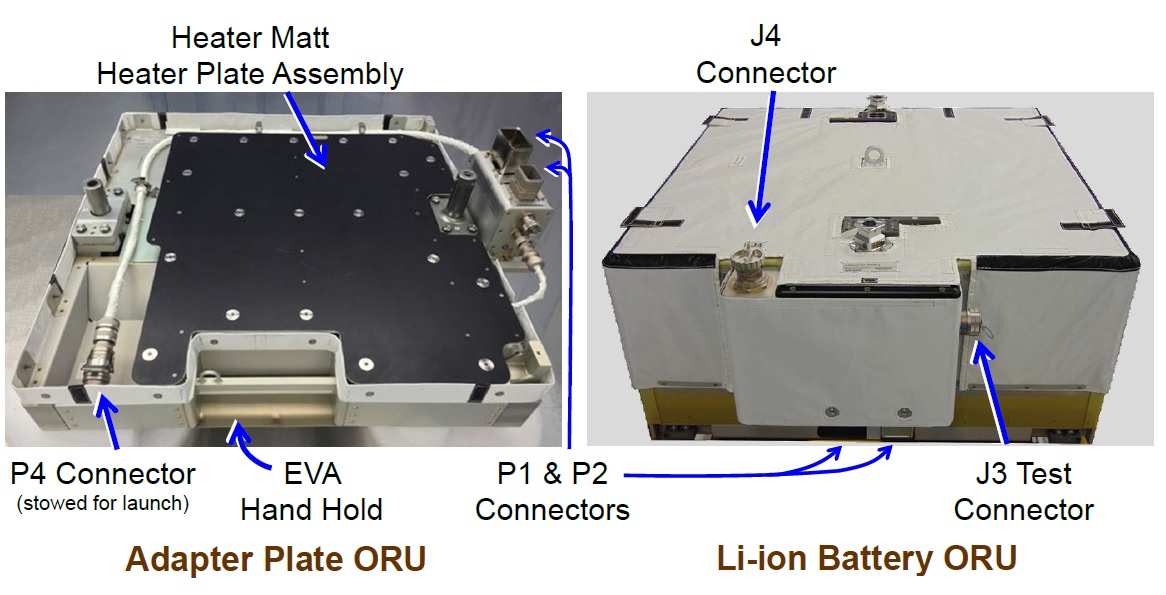 The spacewalk was nearly identical to the one performed a week ago with a few minor exceptions. The batteries being replaced this time were on the opposite side of the P4 truss on the port side of the outpost.

Altogether, six lithium-ion batteries were replacing 12 nickel-hydrogen devices. These are used to power the outpost during orbital night, which lasts 45 minutes during each trip around the planet. The batteries are charged during the 45-minute orbital day.

These batteries were brought to the outpost during the Kounotori 6 mission in the fall of 2018. 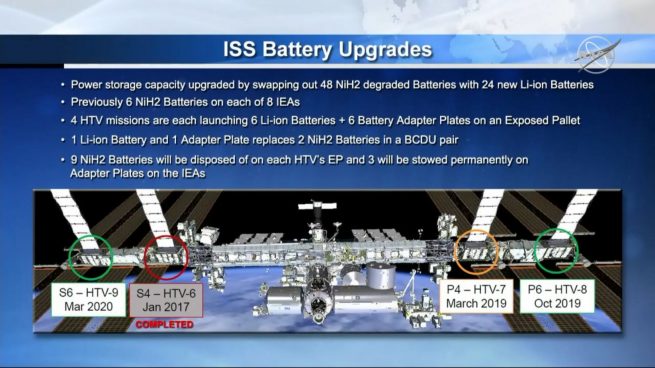 A graphic of the past, current and planned upgrades for the batteries on the space station’s truss segment. Image Credit: NASA

Another minor change to this week’s spacewalk was the addition of the task to replace one of the new batteries with two working old batteries.

According to NASA one of the lithium-ion batteries has not been successfully holding a charge. So, Hague will replace the set while the space agency troubleshoots a possible reason.

After that work was completed, the pair performed several tasks to prepare the P6 truss, just a little farther to the port side of the station, for future astronauts when they continue the years-long process of upgrading the station’s power supply.

The spacewalk concluded at 2:27 p.m. EDT (18:27 GMT) after six hours, 45 minutes. This completed most of the work required to replace batteries for the P4 truss. Most of the rest will be done via ground-based robotics teams remotely controlling the 57.7-foot (17.6-meter) robotic Canadarm2 in concert of the Dextre robotic “hand.”

Hague has now spent 13 hours, 24 minutes spacewalking. This was the first outing for Koch.

Koch is the 14th female to perform a spacewalk, McClain was the 13th when she stepped outside last week.

Overall this was the 215th spacewalk in support of ISS assembly and maintenance since 1998. This brings the total time outside the outpost to 56 days, 4 hours and 24 minutes.