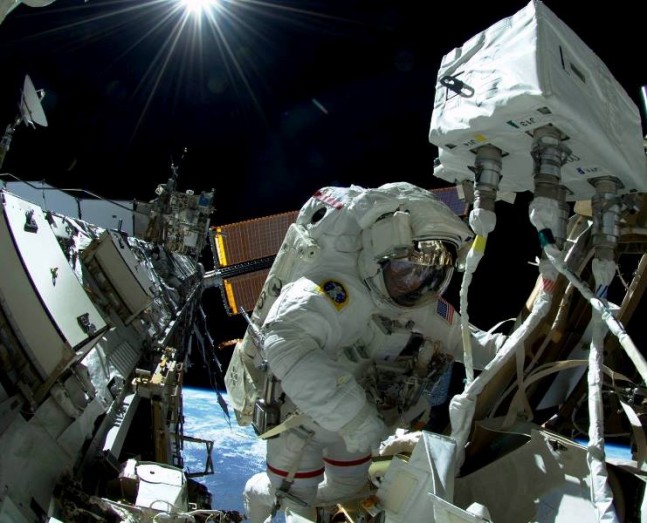 Today’s spacewalk is the fifth of seven planned for the year, and the 182nd overall spacewalk since the construction of the International Space Station (ISS) began back in 1998. Wiseman was designated as EV-1, wearing the suit with red stripes and Gerst donned the solid white spacesuit. The team also switched out a light bulb on one of the stations’ television cameras used to film vehicles arriving and departing the station, as well as installing a backup payload power system for the station’s mobile transporter.

Wiseman and Gerst’s main objective was to relocate a failed ammonia pump from the mobile transporter to an external stowage platform, closer to the airlock. The pump failed last December, and was replaced later that month; however, the crew that replaced it, did not have the time to move the failed pump.

While anchored to the station’s robotic Canadarm2, Gerst transported the pump to the storage platform, from the station’s solar power truss. Meanwhile, NASA astronaut Barry “Butch” Wilmore operated the arm, maneuvering Gerst into position, from inside the station. Gerst and Wiseman then inserted the pump into its new home.

As noted on SpaceFlight Now, Wilmore then transported Gerst over to the right of the station’s Destiny laboratory where he replaced the light bulb for the video camera, ensuring future cargo ships can safely approach the station in orbital darkness. The final task for the astronaut duo was to install the mobile transporter relay assembly (MTRA). The MTRA will move on rails along the front of the solar power truss and is responsible for positioning the station’s robotic arm at various worksites. The assembly will be powered by the station’s electrical system and will feature a payload grapple fixture to temporarily hold different components in place. MTRA will give flight controllers the power to route power attached payloads even if the mobile transporter’s payload attachment cannot get power from any given exterior work station.

Wiseman replied, “Thanks Wheels. Alex and I would just like to express our huge gratitude for getting us back into planned EVAs, safely outside, safely back in on a great EVA. It’s a good day for NASA, it’s definitely a good day for the European Space Agency.”

Gerst added, “We want to say thanks to all the training teams, both at NASA and at ESA for all the hard work … that got us to this point.”

The pair also made a few comments about experiencing their first spacewalk. Gerst said, “This is awesome.” And Wiseman replied, “Yes, simply amazing.”

Wiseman and fellow NASA astronaut Butch Wilmore are scheduled to conduct another spacewalk next Wednesday. On Oct. 15, the duo will replace an electrical component on the station’s solar power system. The system failed at the beginning of the year and in the process, knocked out one of the station’s power channels. Wiseman and Gerst pose with their spacesuits prior to conducting their first EVA. Photo Credit: NASA

The ISS is outfitted with eight large solar panels, providing eight different distribution channels with power. Each panel comes with its own sequential shunt unit (SSU), to regulate voltage. Last May, power channel 3A’s SSU failed and as a result, flight controllers had to divert power for multiple components.

Wiseman and Wilmore will remove and replace the SSU during a period when the panels are not generating power. Then they will perform various other tasks such as relocating a spacewalk foot restraint, repairing a camera, and transferring another television camera assembly from port-1 truss segment to the upper side of the Harmony module.

On Oct. 22, two of the station’s Russian cosmonauts, commander Maxim Suraev and Alexander Samokutyaev, will perform a third spacewalk to perform routine maintenance and swap out external experiments. The Earth serves as Gert’s backdrop as he works on the ISS. Photo Credit: Reid Wiseman / NASA This article as it originally appeared, contained elements from SpaceFlight Now’s article on the EVA – but lacked proper credit. This has since been corrected and SpaceFlight Insider would like to apologize for the oversight.