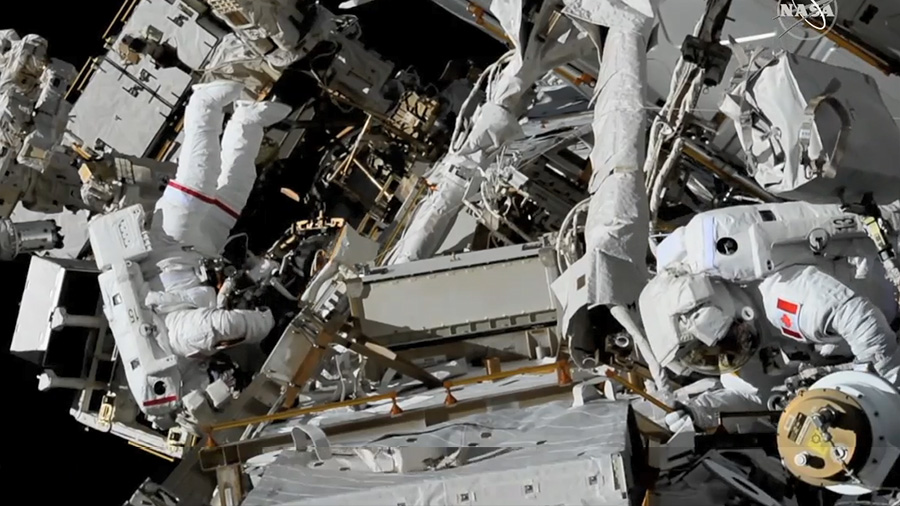 Astronauts Anne McClain and David Saint-Jacques of NASA and the Canadian Space Agency work during U.S. EVA-54 on April 8, the third spacewalk of 2019. Photo Credit: NASA

NASA’s Anne McClain and the Canadian Space Agency’s David Saint-Jacques performed the spacewalk, exiting the Quest airlock at 7:31 a.m. EDT (11:31 GMT) April 8, 2019. It was the third spacewalk at the outpost is less than a month and the final one before a series of cargo ships arrive at the space station.

The primary objective of the first two spacewalks were to install new lithium-ion batteries on the P4 truss segment. In total six batteries replaced 12 older nickel-hydrogen units. In particular, adapter plates were installed so ground teams could remotely use the Canadarm2 robotic arm with the Dextre robotic “hand” to move some of the batteries from a pallet to their new location.

However, during post-installation checkouts, one of those batteries, as well as a battery charge-discharge unit (BCDU), was having problems that ground teams could not correct. As such, it was opted to replace the failed BCDU with a backup unit and replace the initially-installed lithium-ion battery with an old, but still working, nickel-hydrogen unit.

That work was done remotely. However, astronauts needed to uninstall a battery adapter plate in order for a second nickel-hydrogen device to be installed next to the other one, which was the first task of U.S. EVA-54 on April 8.

The faulty BCDU will be returned to Earth, likely aboard the next SpaceX Dragon capsule. A new lithium-ion battery will have to be flown up to the station on a future cargo flight in order to replace the two older batteries.

For the remainder of the spacewalk, cabling work was expected starting with the routing of ethernet cables at the forward end of the Destiny module. This was done to allow for better wireless connectivity for external science instruments.

Finally, the last main item on the spacewalk was to connect an additional backup power line for the Canadarm2 remote manipulator system. This involved McClain running a power line from the Unity module to the S0 truss.

Meanwhile, Saint-Jacques worked to install “slip-off preventers” on the trunnions on the European Columbus module that will prepare them for a commercial experiment platform called Bartolomeo to be installed sometime next year. The trunnions were used to hold the module in the Space Shuttle’s payload bay when it was first brought to the outpost more than a decade ago.

However, problems occurred during the installation and the job wasn’t able to be finished. Saint-Jacques photographed the area, which should allow ground teams to figure out a solution and add it to a future spacewalk.

The two astronauts then returned to Quest and began re-pressurizing the airlock at 2 p.m. EDT (18:00 GMT), bringing the total time outside to 6 hours, 29 minutes.

This was McClain’s second spacewalk, her first occurring on March 22, and Saint-Jacques’ first.

In total, this was the 216th spacewalk in support of International Space Station assembly and maintenance since 1998, bringing that time to 56 days, 10 hours and 53 minutes outside the outpost.

Another set of spacewalks are planned for late May. One is expected to be based out of the Russian segment, while another from the U.S. segment.