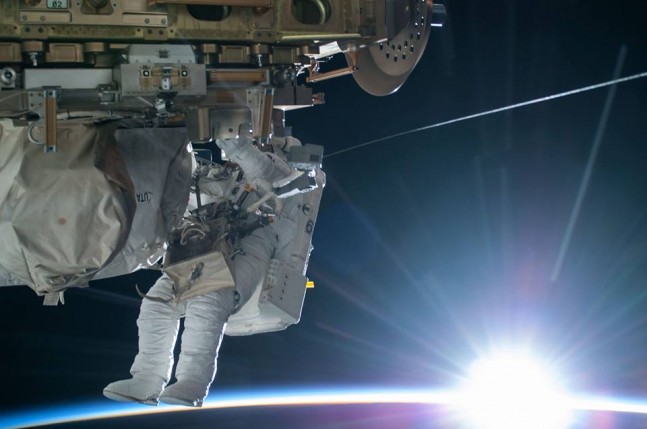 Two astronauts stepped outside the comfort of the International Space Station (ISS) and began the first of three spacewalks designed to upgrade the orbiting laboratory and prepare it for the arrival of commercial vehicles in the coming years. The spacewalk started just behind schedule at 7:45 am EST (1247 GMT). Barry “Butch” Wilmore and Terry Virts set their suits on internal battery power and began the extra-vehicular activity (EVA).

The spacewalk was the first for Virts. “Pretty cool…,” he said as he exited the International Space Station (ISS). For Wilmore, this was his second time walking out in the black of space. When the entire set of EVAs are concluded, Virts will have three walks compared to Wilmore’s four. The trio of spacewalks are numbers 185, 186 and 187 for the ISS program. This set of spacewalks prepares the station to receive commercial crew vehicles from both Boeing and SpaceX. The space walking astronauts are laying the cabling and connections for the new International Docking Adapters (IDAs) that will support commercial craft. Wilmore and Virts finished their EVA in 6 hours and 41 minutes. During the planned event, they installed 364 feet of cable. Over 700 feet of cable will have been installed by the time all three space walks are finished.

SpaceX and Boeing intend to send astronauts to the station sometime in 2017. Currently the U.S. pays Russia to ferry our astronauts to and from the ISS at a cost of $70 million per seat. Boeing is currently in the process of producing its CST-100 with SpaceX developing the company’s Dragon V2. This and two additional EVAs are being carried out to ready the station to receive commercial vehicles. At present, NASA is forced to pay Russia $70 million per seat for rides on Soyuz spacecraft. Photo Credit: NASA

“The challenge for the ISS is going to be continuing maturity over multiple decades of the station and what it will do for crew on the path to commercialization,” said Kenny Todd, International Space Station Operations Integration manager. “It’s fun, it’s exciting and we’re looking forward to transforming the station.”

Initially planned for Friday, the spacewalk was moved to Saturday to allow the crew more time to inspect the space suits. In December the crew found issues with a device called the fan pump separator. This component helps provide temperature control for the spacewalking astronaut. In one suit it did not performa as expected. The second space suit also showed signs of the same issue when inspected in January. The crew replaced the part in Virts’ suit was replaced. NASA sent a new space suit to the station for Wilmore. Since the close of the Shuttle Program in 2011, NASA has lacked the ability to launch astronauts on its own. Photo Credit: NASA

No operational problems with the suits were reported while Wilmore and Virts were outside the station. “All suit systems are reported to be in excellent condition,” said NASA commentator Rob Navias from Houston during the spacewalk.