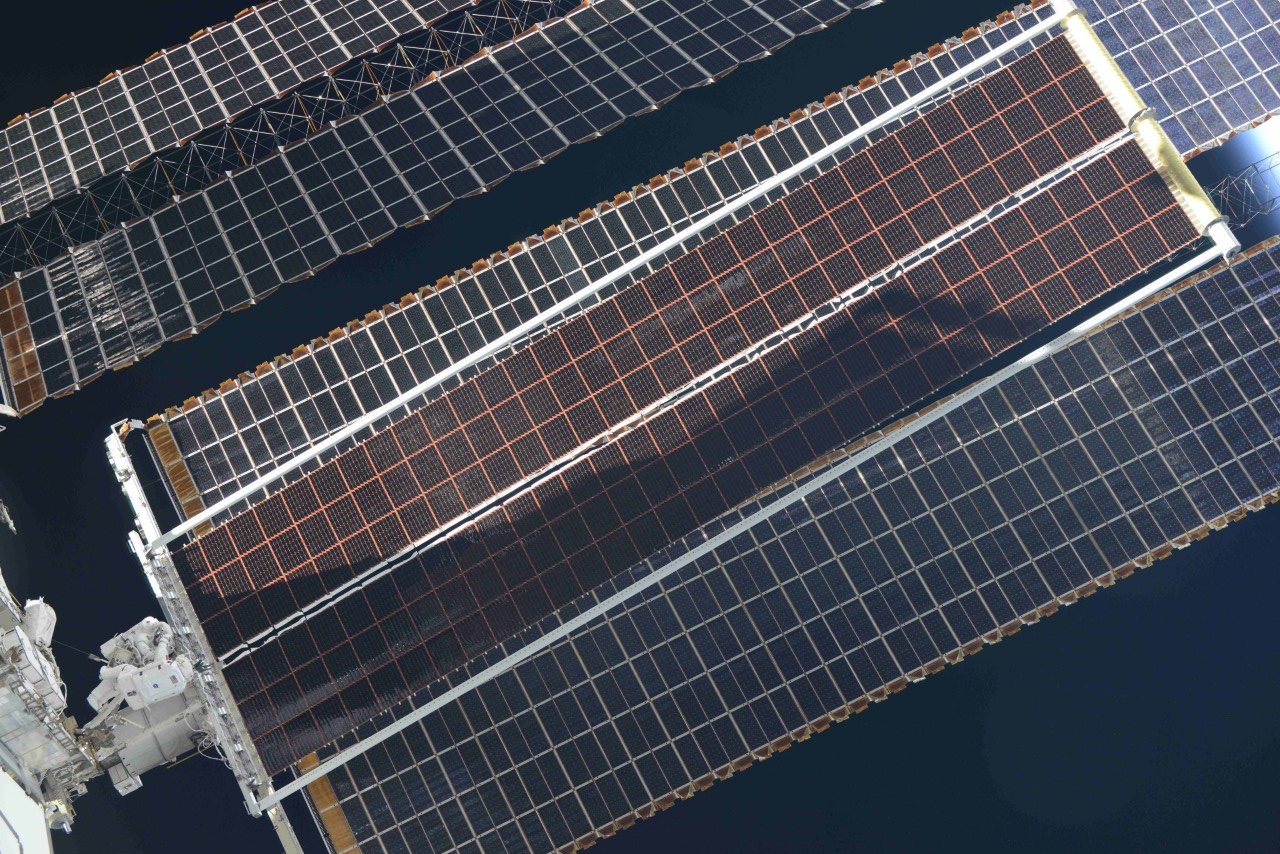 Two International Space Station astronauts finished installing the first of six new roll-out solar arrays, ensuring the outpost will have a sufficient power supply over the next decade.

On June 20, 2021, NASA astronaut Shane Kimbrough and European Space Agency astronaut Thomas Pesqeut ventured outside the ISS for U.S. EVA-75, which lasted 6 hours, 28 minutes. During the outing, the astronauts finished work started by a previous spacewalk to install the first of two roll-out solar arrays, also called iROSA, which were delivered by SpaceX’s unpiloted CRS-22 cargo Dragon earlier this month.

The iROSA array was installed on the mast canister for the existing solar array wing on the 2B power channel, located on the far port side of the ISS on the P6 truss.

The location of the six iROSA devices that are expected to be installed through 2022. Credit: NASA

A second roll-out solar array will be installed on the 4B array mast canister, also on the P6 truss, on the next spacewalk, currently expected on June 25. Two more pairs of iROSAs will be sent to the ISS on two future SpaceX cargo Dragon spacecraft in 2022.

Positioned in front of the current 39-foot (12-meter) by 115-foot (35-meter) arrays, these new devices are designed to augment the outpost’s eight aging solar array wings, which NASA says are showing signs of expected degradation as they begin operating beyond their 15-year service life.

The two P6 truss solar array wings are the oldest at the outpost. They were launched in December 2000. The other six arrays were launched between 2006 and 2009.

Each iROSA, provided by Boeing and Redwire, is 20 feet (6 meters) wide and 60 feet (18.2 meters) long. According to NASA, each device is expected to produce more than 20 kilowatts of electricity, while the legacy arrays currently generate an average of 17 to 23 kilowatts each.

About midway through the outing, an issue was noticed with Kimbrough’s suit Displays and Control Module, requiring him to return to the airlock to perform a “warm restart” on the device. While that seemed to fix the problem, it resulted in a delay of nearly an hour.

Moreover, once the duo placed the first iROSA on the modification kit on the 2B power channel solar array’s mast canister, an interference issue was noticed preventing the device from being unfolded from its launch configuration.

Because there wasn’t enough time to troubleshoot the issue, iROSA had to be re-folded into a safe configuration until the June 20 spacewalk.

For this spacewalk, which officially started at 7:42 a.m. EDT (11:42 UTC) June 20, Pesquet and Kimbrough returned to the work area to unfold the array, finish securing it in place and attach various power cables before the array was commanded to unroll to its full length. The process of unrolling took about six minutes.

The 60-foot-long roll out solar arrays have successfully deployed as the space station soared over the United States. #AskNASA | https://t.co/yuOTrYN8CV pic.twitter.com/6mQOQ2Fj5n

Once completed, the spacewalking duo turned their attention to readying the second iROSA for installation on the 4B array mast canister. This involved removing and stowing hardware in preparation for releasing that device from its launch structure.

The installation of the second iROSA is slated for U.S. EVA-76, which is tentatively scheduled for June 25.

Kimbrough and Pesquet completed U.S. EVA-75 at 2:10 p.m. EDT (18:10 UTC) when they returned to the Quest airlock and began the process of repressurizing.

This was the eighth spacewalk for Kimbrough and the fourth four Pesquet. Kimbrough’s total EVA time now stands at 52 hours, 43 minutes while Pesquet has accumulated 26 hours, 15 minutes.

Overall, this was the 240th spacewalk in support of ISS assembly and maintenance since 1998. According to NASA, astronauts and cosmonauts have accumulated 63 days and 56 minutes working outside the outpost.