Antares launch moves to no earlier than Oct. 24 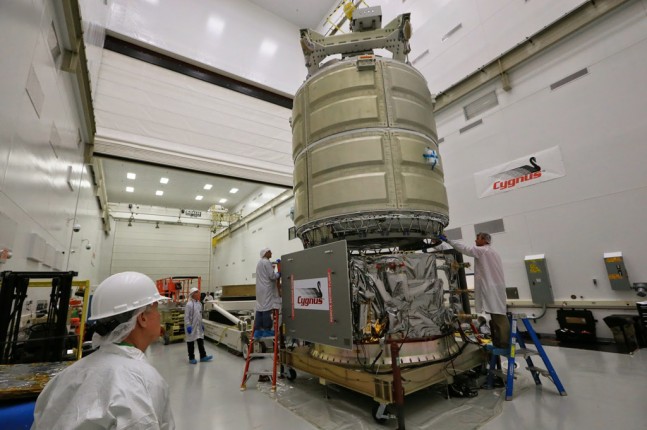 Earlier today, Orbital Sciences and NASA announced that their ORB-3 Antares/Cygnus launch has been moved to no earlier than (NET) Friday, Oct. 24 with a target liftoff time of 7:52 p.m. EDT (2352 GMT) from Virginia’s Mid-Atlantic Regional Spaceport (MARS), located at NASA’s Wallops Flight Facility. A no-earlier-than (NET) date means that there is still the possibility that the new schedule date may still be changed, but will be no earlier than the posted day.

The revised schedule is to ensure that the Antares/Cygnus team has ample time for pre-launch preparations, including testing of the Antares medium launch vehicle that will carry the Cygnus spacecraft to the International Space Station (ISS). This change also reflects a busy schedule for the Expedition 41 crew aboard the space station as they prepare for the arrival of the Cygnus cargo vessel.

The launch schedule has been established in order to build flexibility into the overall mission schedule in the event of an unexpected disruption such as adverse weather at the launch site.

The ORB-3 mission will see the Cygnus logistics spacecraft delivering much needed supplies and cargo to the astronauts aboard the ISS. This mission is part of the Commercial Resupply Services (CRS) contract that Orbital Sciences holds with NASA, which allows them to deliver the 5,050 lbs (2,290 kg) of goods for this flight.

Still launching ahead of the timeline for Cygnus to fulfill the necessary rendezvous and berthing with the space station, Cygnus is scheduled to arrive on Nov 2. The spacecraft will remain in orbit for a few days before maneuvering with carefully timed thruster burns in order to be grappled by the space station’s robotic arm, operated by Reid Wiseman and Barry Wilmore. It will stay berthed to the station for about a month, where on Dec 3 is it scheduled to depart carrying disposal cargo.

Rumor has it, Orbital may move their Antares rocket program to Florida. That would be great for Florida and for the displaced KSC workers who work there.

I know several people who work at Wallops. I asked them about this and they said they haven’t heard that, but they also said that would be great if Orbital did move to Florida.
Most of the workers up there from KSC don’t like it there mainly because housing is scarce and very expensive and when they want to take a trip home to see their family’s they get a lot of grief and resistance from their employers.