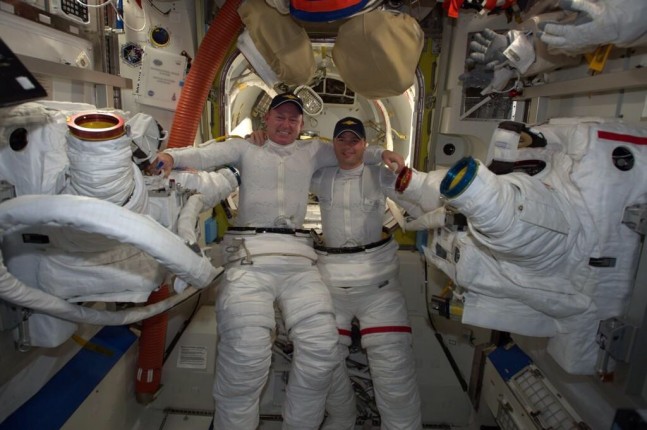 On Wednesday, Oct. 15, NASA astronauts Reid Wiseman and Barry “Butch” Wilmore completed a 6-hour, 34-minute, spacewalk to replace a failed power regulator on the International Space Station (ISS). The regulator, known as a sequential shunt unit (SSU), failed in May of this year, cutting power to one of the station’s eight channels. According to NASA: “The station has since operated normally on seven of its eight power channels, but replacing the SSU provides the station team with more flexibility and redundancy in managing the primary power system and assures enough power for all the planned science.”

Wiseman and Wilmore were on a tight schedule to complete the SSU replacement as the work needed to be completed during a 45 minute (approximate) period in which the ISS passed through earth’s shadow (orbital nighttime) and electricity was not being produced by the station’s solar arrays.

Flight controllers in Houston confirmed the successful replacement just a few minutes prior to orbital sunrise. Reflection of the ISS in Reid Wiseman’s visor on Oct. 15. Photo Credit: NASA

NASA stated that “The repositioning of the camera and WETA was the first step in a major reconfiguration of ISS systems and modules to accommodate next year’s delivery of new docking adapters that will be used by commercial crew vehicles later this decade.”

Wednesday’s spacewalk was the 183rd in support of ISS assembly and maintenance. This was the first spacewalk for Wilmore, and the second for Wiseman. Just last week, on Oct. 7, Wiseman joined European Space Agency (ESA) astronaut Alexander Gerst for a 6-hour, 13-minute, spacewalk in which the astronauts repositioned a malfunctioning cooling pump, replaced a camera light and installed a backup power source to the ISS’s robot arm transporter.

The next ISS spacewalk is scheduled to take place on Oct. 22, when Russian cosmonauts Max Suraev and Alexander Samokutyaev will remove and jettison surplus Russian hardware affixed to the exterior to the orbiting laboratory. The duo will also conduct a detailed photographic survey of the Russian section of the space station.