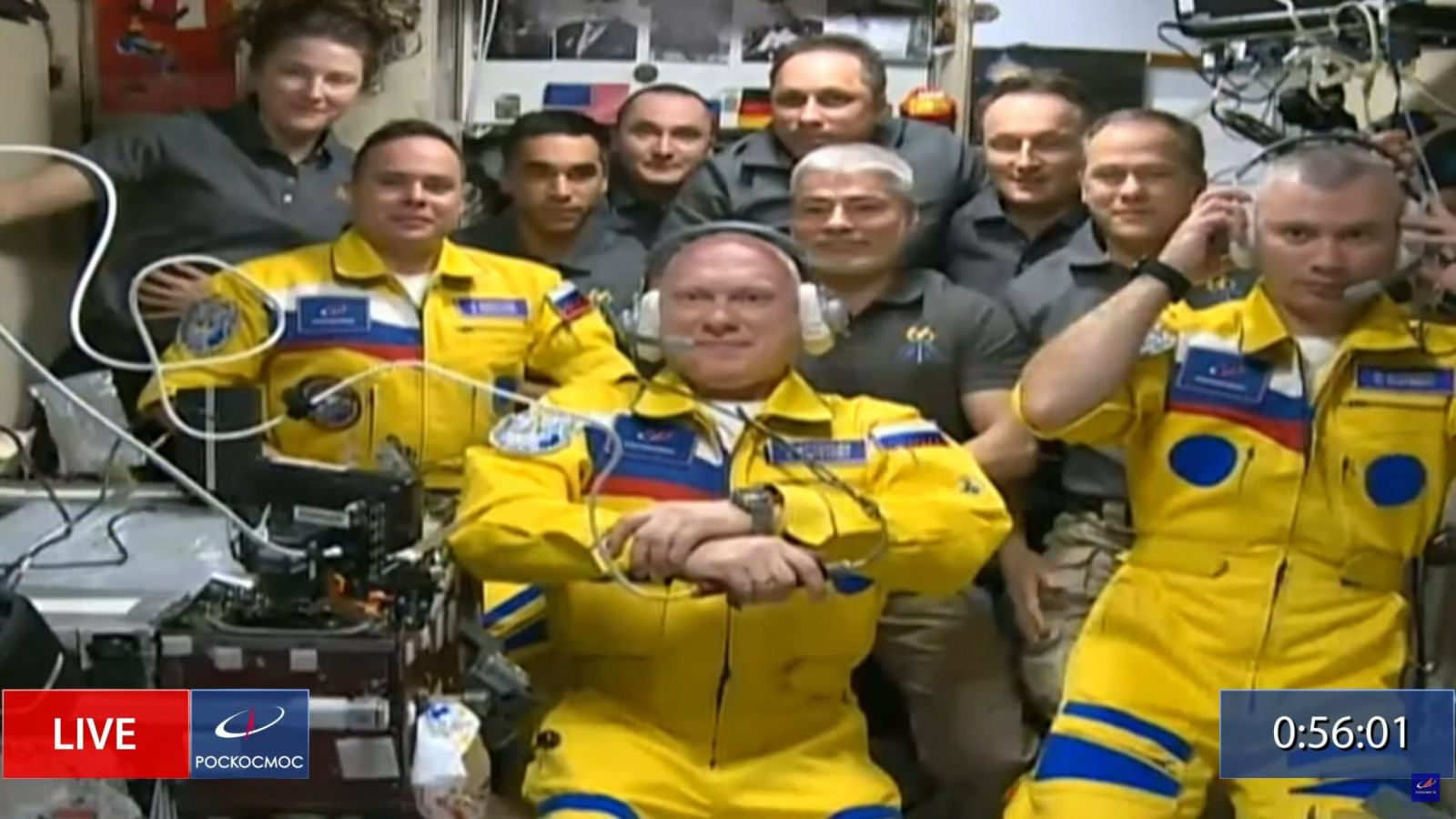 The newly-arrived crew of Soyuz MS-21 is seen with yellow and blue flight suits inside the Zvezda module shortly after boarding the International Space Station. From left to right: Sergey Korsakov, Oleg Artemyev and Denis Matveev. Credit: Roscosmos

For the first time, a Soyuz spacecraft with only Russian cosmonaut International Space Station crew members launched and docked to the orbiting outpost.

During the approach, there was a minor alignment glitch, which prompted Artemyev to manually pilot the Soyuz to the Earth-facing port of the Prichal module. This was the first time that a spacecraft docked to that module, which launched last November.

The fresh trio is planning to stay at the ISS for about six months. They are replacing Shkaplerov, Dubrov and Vande Hei, who are returning to Earth in Soyuz MS-19 on March 30.

While Shkaplerov has been in space since October 2021, Dubrov and Vande Hei have been orbiting Earth since April 9, 2021. Those two have accumulated 355 days in space upon their return.

The all-Russian crew of Soyuz MS-21 has been planned for months as NASA opted to not acquire a seat on Soyuz MS-21 and is instead expected to begin a seat swap program starting later this year. In that seat swap, a Russian cosmonaut would fly in a Crew Dragon and a U.S. astronaut would fly in a Soyuz. This ensures both countries are represented on the space station at all times.

Historically, Soyuz spacecraft bound for the ISS have always had at least one U.S. astronaut, an international astronaut or a spaceflight participant.

For now, the next couple of weeks at the ISS is expected to be extremely busy with multiple crews coming and going. Several days after Soyuz MS-19 lands, a SpaceX Crew Dragon is set to send an all-private mission to the outpost with four people.

After they leave, a NASA crew-rotation mission is slated to launch, also via a Crew Dragon spacecraft from Florida. That’s scheduled for April 19.

Crew-4 is set to fly NASA astronauts Kjell Lindgren, Bob Hines and Jessica Watkins, as well as European Space Agency astronaut Samantha Cristoforetti to the station for a five-month stay.

They’ll be replacing the Crew-3 astronauts — Chari, Marshburn, Barron and Maurer — who have been in space since November. Crew-3 will splashdown in the ocean off the coast of Florida about a week after Crew-4 arrives at the ISS.

All told, 18 different people will be on the space station over the course of about a month or so with up to 11 people at the same time.