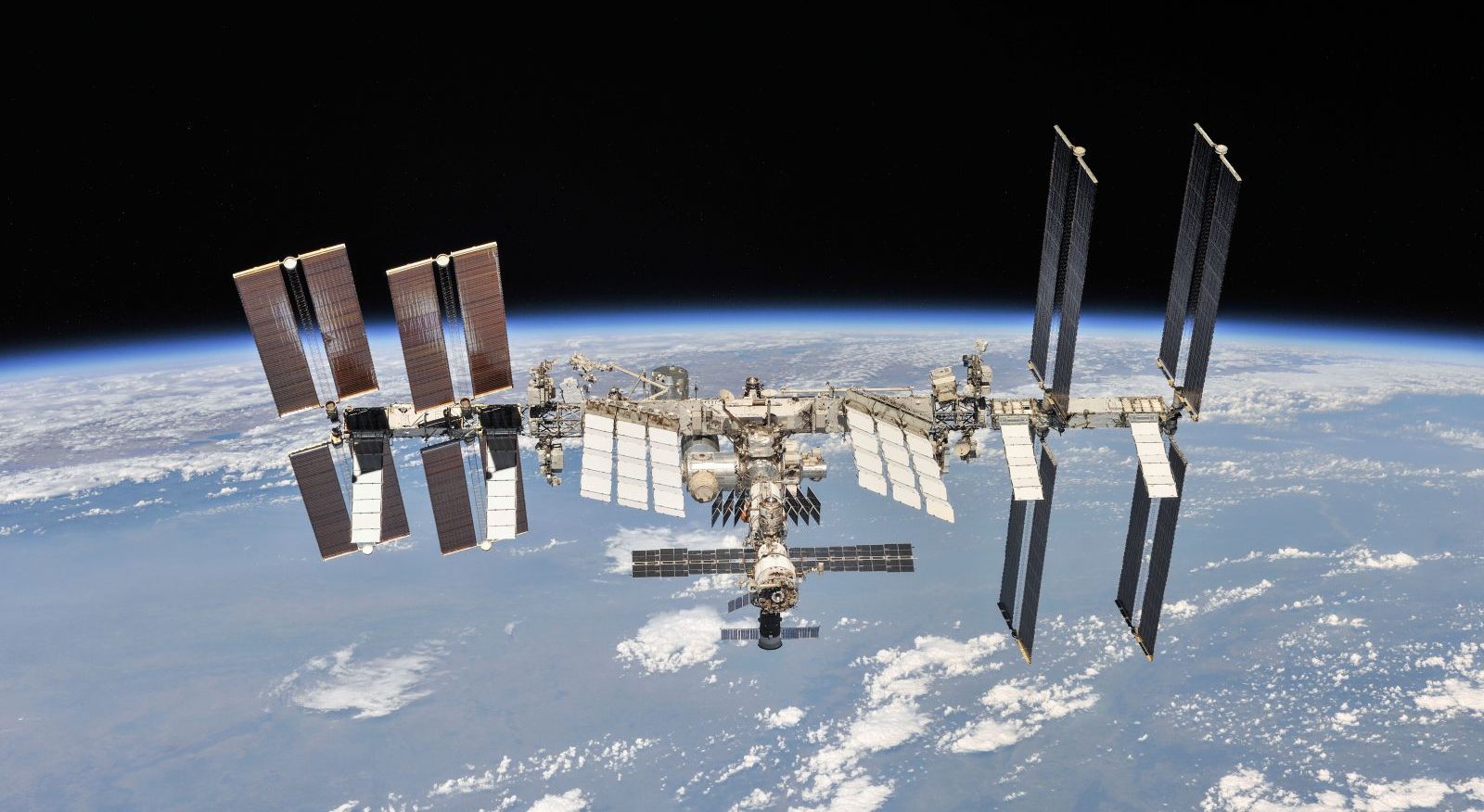 The 20th year of International Space Station operations continued to show hundreds of of science experiments can be performed while managing a dozen different visiting vehicles and multiple spacewalks throughout the year. Moreover, it showcased the international partner space agencies’ ability to handle and recover from large unexpected events. 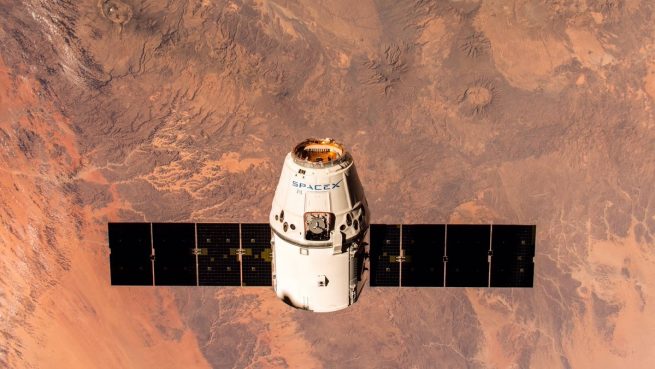 Not only did the 15 people living aboard the outpost between Expeditions 54-58 see a flurry of activity from nine unpiloted visiting vehicles, several crewed Soyuz arrivals and eight spacewalks, hundreds of experiments were also performed in a range of fields from Earth sciences to metallurgy to astrophysics. Additionally, it was the 20th anniversary of the first two modules placed into orbit — Zarya and Unity on Nov. 20 and Dec. 4 respectively.

But perhaps the two most noteworthy events that happened in the space station program in 2018 were the discovery of a hole in the Soyuz MS-09 spacecraft in August, causing a slow pressure leak, and the dramatic in-flight abort of Soyuz MS-10 in October, preventing NASA astronaut Nick Hague and Russian cosmonaut Aleksey Ovchinin from reaching orbit, let alone the outpost.

Both events required the communication and cooperation of all international partner space agencies in order to keep crews safe and maintain what is now more than 18 years of continuous human presence in space.

On Aug. 29, ground controllers in Houston and Moscow detected signs of a “minute pressure leak” somewhere in the orbiting complex. According to NASA, the pressure reduction was slow enough that it was decided to allow the crew to continue sleeping and address the issue once they woke up. 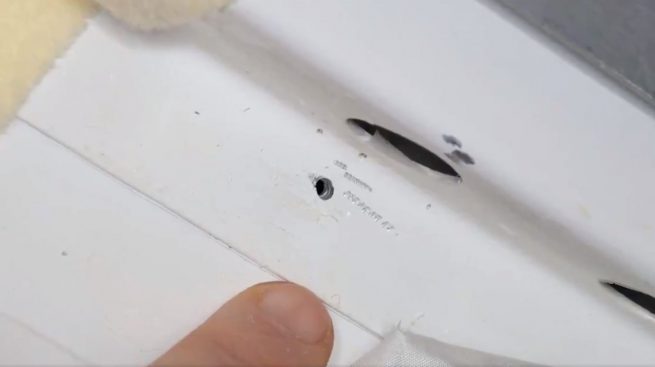 “When the crew was awakened at its normal hour this morning, flight controllers at Mission Control in Houston and at the Russian Mission Control Center outside Moscow began working procedures to try to determine the location of the leak,” NASA said in a statement, Aug. 30.

The crew worked that morning to find the hole and located it inside the orbital module of the Soyuz MS-09 spacecraft, which was docked at the Earth-facing port of the Rassvet module. It was measured to be about two millimeters in diameter.

While any pressure decline aboard the space station is bad, at the maximum leak rate it was estimated that the station’s air reserves would have run out in about 18 days, which gave Expedition 56 plenty of time to troubleshoot.

After discussions between the crew and mission control centers in Houston and Moscow, it was decided to have the crew apply an epoxy substance with medical gauze around the opening. This appeared to work and no signs of leakage aboard the spacecraft was seen throughout the rest of the spacecraft’s stay, which lasted until Dec. 20.

While an exact origin story for the hole has yet to be determine, it was found to likely be caused by human and by an engineer on the ground. However, Russian ground controllers requested a spacewalk be performed to peel away the exterior thermal and micrometeoroid shielding to get to the hull of the Soyuz in order to grab a sample of any material on the other side. That way, a more thorough investigation could be had once samples are received on the ground..

That spacewalk, however, would be postponed until December (it was originally planned for November) as another Soyuz-related event occurred on Oct. 11. 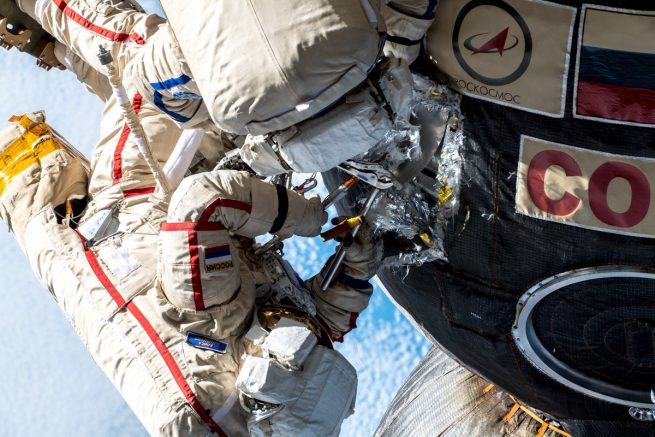 Russian cosmonaut Oleg Kononenko peels away thermal insulation from Soyuz MS-09 on Dec. 11, 2018, after slicing into it with a knife. Photo Credit: NASA

‘Failure of the booster’

At 4:40 a.m. EST (8:40 GMT), Hague and Ovchinin launched in Soyuz MS-10 atop a Soyuz-FG rocket. Around the time of the separation of the four strap-on boosters — about 2 minutes into the flight — a separation error occurred, causing one of the boosters to recontact the core stage.

The prompted the onboard computer to trigger an abort sequence. Because it happened after the tower had separated, thrusters on the fairing encapsulating the spacecraft were used to pull the capsule away from the disintegrating rocket. 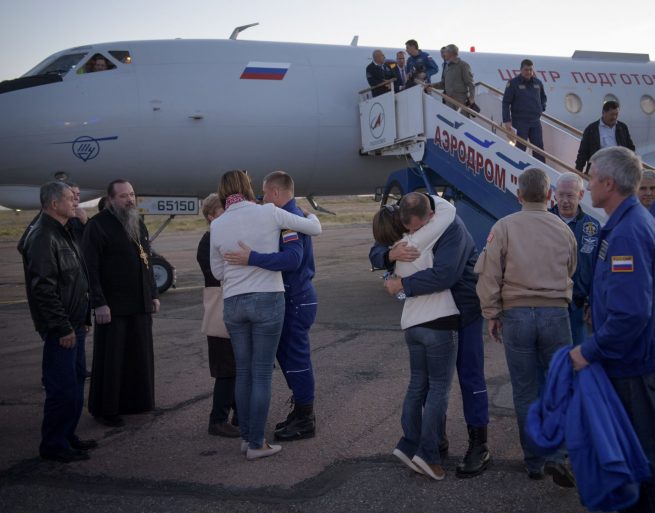 This was the first time in 35 years that a Soyuz abort had occurred. Once separated, the capsule was placed into a ballistic trajectory. During a brief re-entry period, the crew experienced a peak deceleration of about 6.7 times the force of Earth’s gravity.

About 20 minutes after the incident, the crew landed safely in Kazakhstan via typical landing procedures. Search and recovery teams reached Ovchinin and Hague immediately after touchdown, according to NASA. The pair ended up landing about 12 miles (20 kilometers) east of Zhezkazgan, Kazakhstan.

It would be found that an improperly installed separation sensor prevented one of the boosters to properly fall away. Subsequent Soyuz rocket flights, and inspections of the next Soyuz-FG variant, showed the problem was not recurrent. As such, the next crew aboard Soyuz MS-11 launched safely in early December.

The failed arrival of a crew to the ISS — a first in the program’s history — required a vast amount a realignment of work. This included the delay of a critical upgrade to the space station’s power system.

New lithium-ion batteries were launched aboard the Japanese Kounotori 7 spacecraft. Under the original plan, the batteries (located on an Exposed Pallet) would have been replaced by spacewalking crews with the old nickel-hydrogen units being placed in the Exposed Pallet and put in the Unpressurized Logistics Module of the Kounotori to burn up when the spacecraft was deorbited.

However, the pallet was kept at the station and Kounotori 7 departed without the old batteries. The new plan calls for spacewalks to be performed sometime in the first quarter of 2019.

Additional schedule realignments included the delayed departure of Soyuz MS-09 from Dec. 13 to Dec. 20, and the advancement of the Soyuz MS-11 launch and arrival from Dec. 20 to Dec. 3.

Hague and Ovchinin are set to try to launch to the space station again on Feb. 28, 2019. This time they will be joined by NASA astronaut Christina Koch. Once they dock, they will join the already aboard crew — Russian cosmonaut Oleg Kononenko, NASA astronaut Anne McClain and Canadian Space Agency astronaut David Saint-Jacques — to form Expedition 59.

“The 20th year of International Space Station operations continued to show hundreds of of science experiments can be performed while managing a dozen different visiting vehicles and multiple spacewalks throughout the year.”
– Derek Richardson

The ISS may eventually have a new role in the upcoming decades of space exploration.

Various sizes of tanks of iodine may eventually be stored at the International Space Station and get connected/docked to the reusable and highly propellant efficient electric propulsion space tugs that the SLS could launch into LEO.

“Taking into account system requirements and constraints for a mass and volume equivalent system, iodine has a specific impulse density of nearly 6000 g/cm3, and delta velocity capability of over 7 km/s making it three to four times as effective a propellant as xenon.”

And, “In other words, iodine will allow a future space mission to, fly farther, fly faster, and last longer
at a significantly reduced cost.”

And, “Using iodine offers a second advantage over xenon—a reduction in risk to the launch provider and to any primary payload due to eliminating the high pressure storage of xenon.”