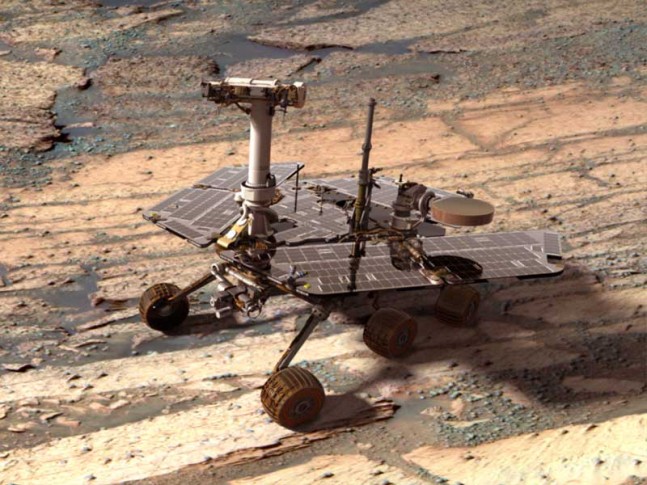 As NASA’s Mars Exploration Rover (MER) Opportunity passes the one decade mark on the Red Planet, Dr. James Rice, a scientist working with the rovers looked back on 10 years of achievements and a future filled with possibilities. Rice detailed how the robot has survived adversity, persevered – and astonished.

Rice is an astrogeologist and science team member and geology team member working on NASA’s MER program. What he thought would be an assignment lasting some 90 days – has become an effort which has lasted half as long as some careers. Rice, seen here before the launch of one of the two rovers, has played a pivotal role in the MER program. Photo Credit: NASA

While Rice might not have expected to have been working with Spirit (which went offline in 2010) and Opportunity as long as he has – he also has no regrets about how the past 10 years on Mars have turned out.

Sitting down for a chat with Rice revealed the heart and soul behind the MER project and provided an insight as to perhaps why a program given a lifespan of just three months – has lasted more than a decade.

SpaceFlight Insider: First Dr. Rice, we’d like to thank you for sitting down and taking the time to chat with us about Opportunity.

Rice: “No problem, it’s my pleasure.”

SpaceFlight Insider: Let’s get right to it, the Mars Exploration Rover

Rice: “Yeah, you’re right, we just celebrated our tenth year on the surface of Mars just a couple of weeks ago with Opportunity and unfortunately Spirit didn’t survive that long but it had a lot longer life than we originally planned, not too bad for a 90 day mission!”

SpaceFlight Insider: Can you provide us with some of the highlights?

Rice: “A lot of folks want us to tell them what the high points of this mission have been. That’s really difficult to do because you have to think back over the course of 10 years and that gets really hard to do. A couple things bubble up very quickly, but I think the most amazing highlight has been the journey as a whole. Nobody knew that back when the rovers landed in January of 2004 that they’d still be going after all that time. We thought if we might be going around 120 days and if we got lucky maybe 180 days – but no one thought that this far our down the road that we’d still be operating, making discoveries and doing great science up there. I think it’s a testament to the engineers who built these vehicles.”

“I think that what is important for folks to know is that not only were these spacecraft designed to last only 90 days, 90 sols…but that they were also only supposed to drive about a kilometer. We’re closing in on some 39 kilometers with Opportunity right now. Words really can’t describe what we’re feeling right now, we’re overjoyed. We take each day as a blessing, as a gift – because we don’t know if we’re going to have tomorrow. So each day we try to do the best that we can in terms of operation planning and collecting the data.” SpaceFlight Insider: Tell us a bit about the recent rocket that Opportunity has discovered which has created such much interest…

Rice: “Yes, this was a mysterious little rock, we called it Pinnacle Island, it’s a dinky little rock, only some 4 centimeters wide. But it’s very unusual; it’s like nothing that we’ve seen in the last 10 years on the surface of Mars. It’s got us all on the science team scratching their heads and wondering what this thing is telling us and that’s the fun thing about this mission of discovery is that we come across things that are totally unexpected. We’re currently trying to put together what this rock is trying to tell us. We’ll get that, but we’re still in the phase of collecting all the data that we can in terms of imaging and APXS (Alpha Proton X-Ray Spectrometer) data and it’s like a brand new mission right now.” “When we first saw it, someone said it looked like a ‘jelly donut’ – but I don’t think that’s accurate. It’s more like a Danish (laughs). At its center, it’s kind of red-colored. We’ve examined it with the APXS and its super-high in sulfur, magnesium and manganese. I mean, measurements that are higher than anything we’ve ever seen before. What we think happened is when Opportunity turned around, one of the rover’s wheels popped the rock to where it currently is at. We’re not entirely certain, but we think it got to its present location when Opportunity conducted a turn in place.”

“Our preliminary interpretation, which is still a work in progress, but we think this is a rock which has been highly altered in interactions with water. We’re still trying to figure out the exact location from where it got popped loose. We think we’ve seen the area it came from and we’re probably going to have to go investigate up there with the rover. It was really strange because we took pictures and then four sols later we look back and there’s a rock there that wasn’t there four sols earlier.”

Rice: “Actually? We were driving both of them backwards. A weird thing happened, both rovers ended up having problems with their right front wheel and the actuators. That’s one of the beautiful things about the engineering of this vehicle; you can drive it forwards and backwards. We’ve done things with these rovers which were never planned. We have driven them up hills, sent them down into craters. Even before we lost Spirit back in 2010, which still lasted six-and-a-half years.”

“With Opportunity right now we have that right front wheel problem and the heater has been stuck on since the day we landed – but we have work-arounds for that. The other thing is the instrument deployment device, the arm, we’ve had some problems, kinda like arthritis, we got some issues with that – it doesn’t work like it did we when landed 10 years ago but we got a really clever team and they’ve developed work arounds. We’ve got a great team and the fact that we were only supposed to be rolling three months and here we are at 10 years – is proof of that.” Each of the rovers, Spirit and Opportunity, safely touched down on the surface of the Red Planet via air bags. Photo Credit: NASA / JPL / Caltech

SpaceFlight Insider: The ‘dust-clearing events which have helped keep Opportunity going, are they doing enough to keep it going or are you starting to see the rover’s power-levels drop slowly toward a point of no return?

Rice: “Not really, the night we landed we stated with some sparkling clean solar panels we were generating 900 watt-hours. I need to do some homework to figure out the exact numbers…but I think now we’re down around 4 to 500 watt-hours and sometimes we go up to 550, but that’s enough to still drive around and get some good science done. I think the ‘red line’, the closest we ever got to it, well Spirit hit it because it died but the closest that Opportunity ever got was in 2007 during the Martian summer. There was a regional dust storm that came through there and dust storms aren’t very good for solar-powered vehicles (laughs) and we were getting down around those numbers. But, we survived it. So, we’re okay, we’re never really near a margin like that.” The rock dubbed “Marquette Island” one of the many spots that Opportunity has invested during its decade on the Red Planet. Photo Credit: NASA / JPL / Caltech

“Any day now, the vehicle could go. A critical link in that system could break and we’d be dead. Given that Opportunity is close to the Martian equator, it never really had any close calls other than that dust storm back in 2007.”

SpaceFlight Insider: What do you think the future holds for Opportunity? What is it telling us and what should we take away from the fact that it has been such a long-lived mission?

Rice: “This rover has done great things, its lasted over a decade and it’s still going strong, still doing work, it doesn’t get a lot of the attention like Curiosity is getting, which is the new kid on the block. But, we’re still holding our own. I work every day on Mars. However, one thing this mission drives home to me is that – we need astronauts up there. If we had just two astronauts up there trained in geology they could’ve done everything and more that Opportunity has done in three weeks, they probably could have done it in less that. I feel comfortable in saying that because we’ve driven almost 39 kilometers in 10 years. Apollo 17 was in Taurus-Littrow for three days and they drove I think it was 37 kilometers.”

“These rovers are great emissaries for us – but they’re no replacement for people. At times it’s frustrating and slow to work with these things. I think that we need to get astronauts up there and the whole question about life on Mars – I think it’s going to take boots-on-the-ground to obtain the definitive answer that question.”

“I live in Arizona, when I see pictures of Mars, it doesn’t look so bizarre or alien, it drives home the fact that Mars is the most Earth-like planet near our world. We’ve found dry lakebeds on Mars. I did my dissertation on that and at the time it was controversial. Ten years later I was working on the mission that discovered lake beds on Mars – that was very fulfilling.”

“If I had to pick the biggest scientific discovery we made during the past decade on Mars, I think I’d have to say it was the silicates in the clay minerals. The reason that this is important is because it tells us that water was interacting with rock for long periods of time, geologically significant periods of time. Water was covering these rocks up, flowing through them  and this water was ‘drinkable’ water, it had a neutral ph or else clay minerals wouldn’t have formed like the rocks that formed at Eagle Crater.” Opportunity’s time on Mars has been dramatically extended by periodic “cleaning events” – dust devils which have cleaned off the robot’s solar panels from time-to-time. Photo Credit: NASA/JPL-Caltech/Cornell Univ./Arizona State Univ.

SpaceFlight Insider: It certainly has been an amazing time and we’d like to thank you for speaking with us about this incredibly successful mission.

Rice: “It really has been. Thanks so much!”

Dr. James Rice has worked for more than 25 years into uncovering the history of Mars’ geology and the influence that water has played on the surface of the Red Planet. He has worked with NASA’s Astrogeology Headquarters of the United States Geological Survey, the Mars Spaceflight Facility with Arizona State University and the Lunar and Planetary Laboratory located at the University of Arizona. He currently serves as the co-investigator for the Mars Exploration Rover project.

Rice has also served on both NASA’s Mars Odyssey and Lunar Reconnaissance Orbiter (LRO) missions. He has been involved with selecting the landing site for every NASA mission to the Red Planet since Mars Pathfinder, which landed in 1995.

This interview originally appeared in The Mars Society’s “The Mars Quarterly.”