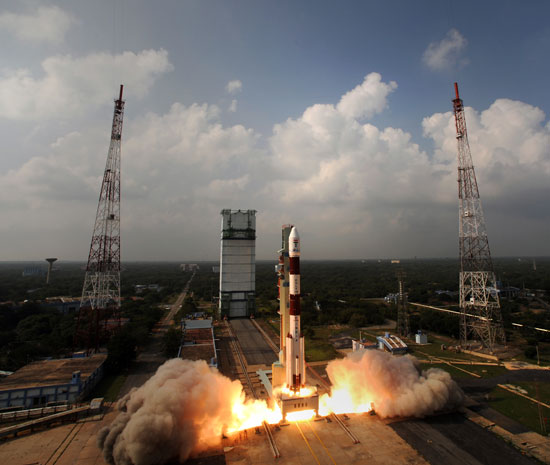 The Mars Orbiter Mission (MOM) was thrust loudly through the first leg of its journey to the Red Planet today at 14:38 IST (4:08 a.m. EST). This is India’s first mission to Mars. The 482.5 kg (1,064 lb) spacecraft, plus 852 kg (1,878 lb) of onboard propellant and oxidizer, was lofted from the Satish Dhawan Space Center on Sriharikota Island, 50 miles north of Chennai, by flight C25 of the XL variant of the four-stage India Space Research Organization’s (ISRO) PSLV (Polar Satellite Launch Vehicle).

The structure of the spacecraft and the launch system configuration are similar to those used on India’s lunar probe, Chandrayaan 1, which operated successfully from 2008 to 2009. The overall cost of the mission is put at $96 million.

The first stage of the PSLV used to launch the “MOM” employs one of the world’s largest solid-fuel boosters, producing a maximum thrust of about 1 million pound-force (4.4 MN), and was augmented by six strap-on motors, each developing 152,000 pound-force (676 kN) of which were ignited on the ground. A liquid-propellant second stage, solid-propellant third stage, and liquid-propellant fourth stage, which coasted for 25 minutes before firing, helped place the MOM in an initial Earth orbit with a perigee (low point) of 155 miles (249 km), an apogee of 14,600 miles (23,496 km), and an inclination of 17.8 degrees. The Mars Orbiter Mission’s own main engine – Liquid Apogee Motor (LAM) – is capable of generating 100 pound-force (445 N) of thrust using a bipropellant combination of monomethylhydrazine (MMH) and dinitrogen tetroxide. Six firings of the LAM will progressively raise the spacecraft’s Earth orbit to one with a perigee of 370 miles (595 km) and apogee of 134,000 miles (215,652 km), in which it will remain for about 25 days. A final firing on November 30 will send MOM on her interplanetary trajectory.

One of the crucial moments of the mission will come when it’s time to restart the LAM after the 300-day, 480-million-mile (772.5-million-kilometer) journey to Mars. If everything goes according to plan, Mars orbit insertion will occur on or around September 24, 2014, within a day or so of the arrival of NASA’s new Mars orbiter, MAVEN (Mars Atmosphere and Volatile EvolutioN). The MOM spacecraft is slated to enter Martian orbit in September of next year. Photo Credit: ISRO

The Mars Orbiter Mission (nicknamed Mangalyaan, the Sanskrit for “Mars-craft”) is described as a technology-demonstrator, aimed at developing the hardware and techniques for India to carry out further and more ambitious interplanetary projects. Its 15-pound (6.8 kg) scientific payload consists of five instruments for studying the Martian atmosphere, mineralogy, and surface features, including the Methane Sensor for Mars (MSM) which will search for signs of this elusive gas in the atmosphere and attempt to map any sources of methane plumes on the ground, if they exist.