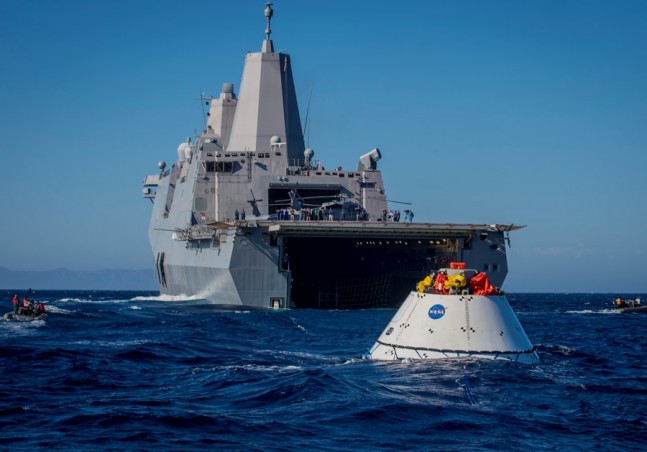 The U.S. Navy's U.S.S. Anchorage will recover NASA's Orion spacecraft after it splashes down in the Pacific Ocean on Dec. 4, 2014. Photo Credit: U.S. Navy / NASA

On Dec. 4 NASA will take the next step toward putting humans on the face of Mars with the launch of the space agency’s Orion spacecraft on what is known as Exploration Flight Test 1 (EFT-1). While many outlets are talking about the spacecraft’s flight atop a United Launch Alliance (ULA ) Delta IV Heavy booster – what has been discussed in less detail – is what will be taking place after the spacecraft conducts the mission – and splashes down in the Pacific Ocean.

If everything goes according to plan, the Delta IV Heavy will lift off from Cape Canaveral Air Force Station’s Space Launch Complex 37 (SLC-37), according to the EFT-1 timeline overview, at 7:05 a.m. EST. Approximately 17 and a half minutes later Orion will enter into its first orbit.

An hour and 55 minutes after launch the massive booster’s upper stage will ignite, and in so doing send Orion into its second, higher orbit where it should reach an altitude of approximately 3,600 miles (5,794 kilometers) above Earth’s surface and well into the Van Allen belts that encircle our world. This radiation is expected to be so intense that the cameras on-board will be turned off to protect them from damage. After completing two orbits and carrying out a reentry at some 20,000 mph – Orion will splash down in the ocean and be recovered by Navy divers. Photo Credit: NASA

About 3 and-a-half hours after launch the Orion craft will begin its return to Earth, passing once again through the Van Allen belts, reaching speeds of up to 20,000 miles per hour (32,187 kilometers per hour) and temperatures at it’s heat shield of up to 4,000 degrees Fahrenheit (2,200 Celsius).

Finally, after a series of events and the deployment of eleven different parachutes, Orion will splash down in the Pacific Ocean approximately 600 miles (966 kilometers) off the coast of Baja, California.

What’s next? If you are old enough to remember the Apollo, Gemini, or Mercury missions – you may recall that helicopters would circle the target area with numerous ships on standby that would all head toward the final splashdown area – where the returning craft would be collected.

Over time, the accuracy of predicting the final point became better. For this landing the U.S. Navy will again employ several ships with different capabilities, along with aircraft and helicopters. One of those ships is the USS Anchorage.

USS Anchorage is a recent design with a primary mission of transporting U.S. Marines and their amphibious assault equipment to their combat assignments. The vessel is designated LPD 23 and is part of the San Antonio class of Amphibious Transport Dock ships built by Huntington Ingalls.

The ship carries a complement of more than 1,000 Marines and Sailors. It is equipped with a flight deck and enclosed aircraft hangar that can accommodate 2 helicopters. Below the flight deck is the “Wet Deck” where large hovercraft and smaller craft can launch from. The stern of the Anchorage, and all those in this class of vessel, works much like the tailgate of a truck. It can be lowered into the water, and then the ship takes on water to lower the aft end of the ship – flooding the wet deck to launch or retrieve water craft. For EFT-1 the USS Anchorage, accompanied by a salvage ship named the USNS Salvor, will comprise the primary recovery team. According to the U.S. Navy, the Dec. 4 activities will not impact the vessel’s primary mission.

“Anchorage provided a unique, validated capability to support NASA’s request for operational support without adversely impacting the Navy’s primary warfighting mission,” said Cmdr. Joel Stewart, commanding officer of the Navy vessel. “This unique mission gave Anchorage sailors an opportunity to hone their skills for the routine missions of recovering vehicles in the well deck and operating rigid-hulled inflatable boats in the open water while supporting NASA. The testing with NASA was a success and Anchorage sailors continue to raise the bar, completing missions above and beyond any expectations.” After traveling beyond Earth some 3,600 miles, and conducting two orbits, Orion will be delivered into the U.S.S. Anchorage. Photo Credit: NASA

As Orion progresses through the final stages of its descent, the Anchorage will launch helicopters to locate the craft. According to the NASA Orion Recovery Operations program, U.S. Navy divers using inflatable Zodiac boats will move to Orion and check for any hazards around the spacecraft. At that point they will begin attaching a sea anchor and various harnesses and lines for its recovery.

A tether line (essentially a rope) will be run from the crew module to the Anchorage’s well deck and attached to a winch which will haul the capsule aboard while it is still floating. Once inside the well deck the rear of the ship will be raised and water will be pumped out leaving Orion secure and dry.

When Orion carries a crew, the procedure will be approximately the same with the astronauts remaining aboard while the craft is loaded aboard the LPD vessel.

All of the LPD vessels have full medical facilities on board allowing for the crew to be checked out immediately upon exiting the crew module.

“Successful completion of this test series marks a significant milestone in NASA’s partnership with the Navy to recover the Orion crew module after it splashes down in the Pacific Ocean in December,” said Jeremy Graeber, GSDO NASA Recovery director. “The integrated team has done an amazing job working to refine the procedures to make this mission a success. I feel confident that our team and hardware are ready to support Exploration Flight Test-1.”

adding a little detail….The ballast tanks of the ship are “blown out” using an air compressor, raising the entire ship a little and the stern (back end) a lot. The water in the well deck simply drains out the back opening. A stern gate is raised to close off the opening.

a little more detail…The area used to store aicraft is called a hangar, not an hanger,, which is used to hang clothes on.