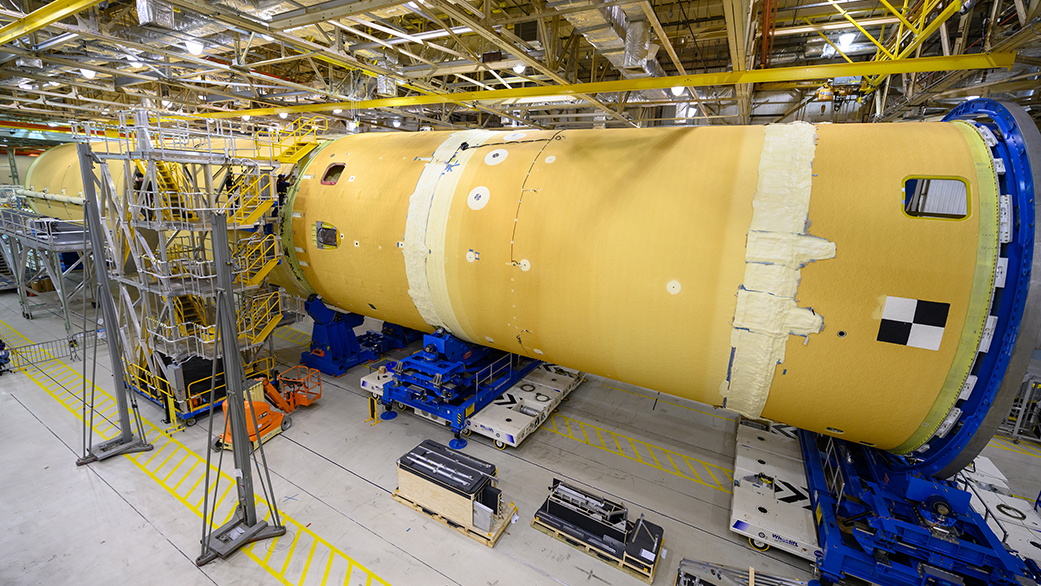 The CS-1 “forward join” — the mated forward skirt, liquid oxygen (LOX) tank, and interstage — was completed in February. Thereafter, the join was removed from its vertical stacking cell, rotated to the horizontal, and transported to another area of the facility for mating with the lower portion of the stage.

In addition, the assembly of the CS-1 liquid hydrogen (LH2) tank has been completed, its thermal protection has been applied, and it has now been mated with the the forward join. 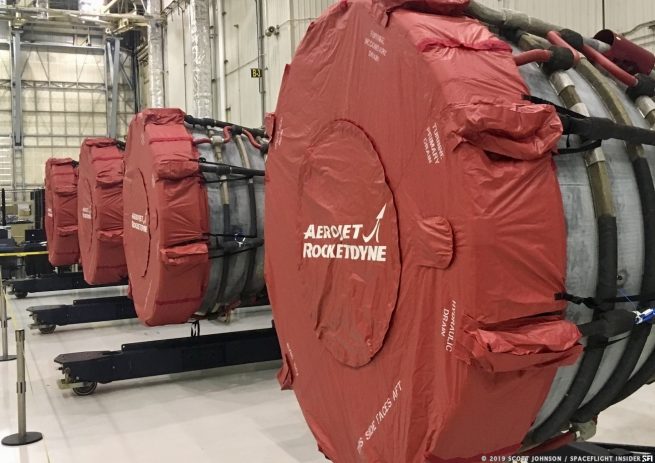 The aft section of the stage, the engine section, has been mated with the “boat-tail,” and is nearing completion.

Within the next few weeks, the engine section (with the integrated boat-tail) should be mated with the forward section of the stage.

Testing of the four CS-1 Shuttle-heritage RS-25 engines has been completed at the Stennis Space Center (SSC), and the engines have been be trucked to MAF — with the last engine arriving on June 27.

Installation of the engines should begin shortly after the engine section is mated to the core stage.

If construction continues as expected, CS-1 assembly should be completed, at MAF, by December (2019).

The stage will then be placed on NASA’s Pegasus barge, at the MAF dock, and transported up the Pearl River to SSC’s B-2 test stand for the “green run” testing of the stage and its four RS-25 engines.

Although no firm schedule has been provided, confidence has been expressed that the completed CS-1 core stage should be secured in SSC’s B-2 stand prior to the end of 2019, and the “green run” test should take place a few months thereafter.

“If construction continues as expected, CS-1 assembly should be completed, at MAF, by December (2019).”

Those 4 RS-25’s and core make the Apollo Second stage took weak! The most powerful rocket ever…we are going!

It would be great if a couple New Glenn first stages replaced the SRB’s. With a single RS-25 upper stage we would have that 130 ton lift, no problem. Maybe a future iteration.