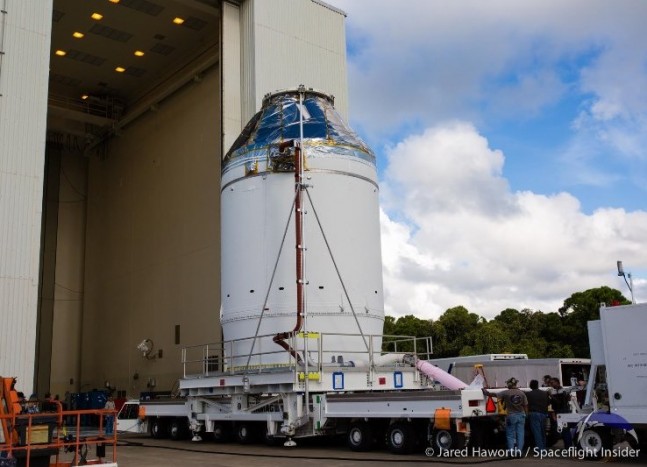 CAPE CANAVERAL, Fla — NASA’s next-generation Orion Multi-Purpose Crew Vehicle is getting closer to the day when the next-generation spacecraft will finally travel into the black. NASA has promoted the spacecraft as the foundation on which the agency will make its first steps towards a renewed era of human spaceflight. On Monday, Sept 29, the spacecraft underwent some of the final integration steps needed before it conducts Exploration Flight Test 1 (EFT-1). This crucial mission for the Orion spacecraft is currently slated to take place on Dec 4, 2014, with a number of aerospace firms working to get NASA back into the human spaceflight business.

The Orion spacecraft is nearing completion in terms of being ready for flight. , having been loaded with the fuels needed to control the capsule-shaped spacecraft’s flight. These propellants include ammonia, hydrazine, and high pressure helium and were uploaded into Orion on Monday, Sept. 29 at Kennedy Space Center’s Payload Hazardous Servicing Facility (PHSF ). The first flight of the Orion spacecraft, a joint effort between NASA and Lockheed Martin, saw some delays earlier this year to make way for other launches. With those missions on orbit, EFT-1 is now on schedule for a December launch and ready to complete the last of its tests over the next few months.

Orion now resides at the Launch Abort System Facility where it will undergo the final phase, which is to be integrated with the launch abort system (LAS). Three solid rocket motors, an attitude control motor, jettison motor and an abort motor make up this critical piece of crew safety equipment.

The abort motor activates “any time” the crew must escape both on the pad as well as during accent. This is an important safety system of NASA’s new new heavy-lift rocket, the Space Launch System or “SLS.” The jettison motor only separates the LAS from the Crew Module after the abort motor has pulled the Crew Module safely away from the primary boost vehicle.  The jettison motor is activated so that the Crew Module can be positioned correctly to fall back to Earth and deploy the parachutes. Controlling this action is the attitude control motor. If the emergency were to take place at Launch Complex 39B, where SLS is planned to be launched from, the abort motor would pull the crew module to safety, it would then land via parachute.

“This escape motor had some very unique challenges; the most unique feature is the turn-flow technology needed to enable the motor to lift the crew module to safety,” said four-time space shuttle astronaut, who now serves as ATK’s vice president of the company’s Space Launch Division, Charlie Precourt. “Turning a high flow rate combustion gas while maintaining adequate insulation, minimizing weight and maintaining performance was a significant challenge.”

By all accounts, the igniter performed as advertised, with the system activating within milliseconds of being activated – producing an acceleration of more than 10 gs.

“Once the launch abort system is integrated and functional testing concludes, the spacecraft is considered done,” said Michael Hawes Lockheed Martin Orion program manager. “Then in November we’ll integrate to the rocket, which is rolling out to the launch pad today.”

That rollout did not occur on Sept. 29 due to inclement weather along Florida’s Space Coast. NASA and United Launch Alliance, the company that produces the Delta IV Heavy launch vehicle opted to hold out until conditions at Cape Canaveral’s Space Launch Complex 37 – the East Coast launch site for the Delta IV family of boosters. EFT-1 will see a crew-rated spacecraft be sent to some 3,600 miles above our home world. After it completes two orbits – it will return back home – at a blistering speed of approximately 20,000 miles per hour. It will then splash down in the Pacific Ocean where it will be recovered by the U.S. Navy and NASA. Avionics, Orion’s heat shield, attitude control, software and other critical elements will be tested during the EFT-1 mission.

Orion is NASA’s successor to its fleet of space shuttles which traveled the orbital byways for three decades. Unlike the shuttle, this capsule-based design is a modern version of the Apollo Command and Service Module which the Space Agency used to send crews to the Moon in the late 1960s and early 70s. The reason for this is the fact that just as with Apollo, Orion’s mission – is to travel beyond low-Earth-orbit. EFT-1 is the first step in what NASA hopes will be a return to crewed flights to far more distant destinations. The U.S. Space Agency plans to send crews to an asteroid and the planet Mars. To accomplish this, Orion has been designed to handle crews of four astronauts for up to 21 days. For missions to Mars, which will take months – Orion will serve as the mode of travel from Earth to a larger spacecraft.

Precourt stressed the fact that NASA and its family of contractors are working to keep crews as safe as possible as they work to send humans to unexplored destinations in our solar system.

“Another important challenge that was imperative to meet, was the ability for the launch abort system to initiate escape at any time during the launch and ascent phase, regardless of the reason,” Precourt added. “One challenge ATK met was the development of a high burn rate propellant to achieve the rapid escape necessary in the event of an anomaly. We developed a propellant that burns about three to four times faster than a typical motor of this size.”

Video of LAS functions being tested, courtesy of Lockheed Martin

very nice to see the abort and jettison motor firing…..and safe land of the module…
By seeing this video, any astronaut will be happy now…