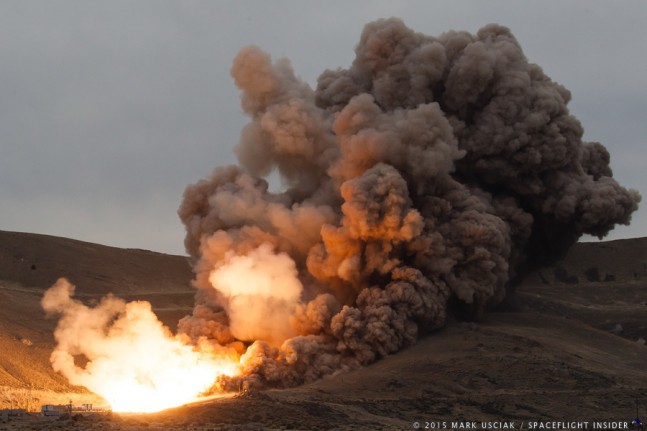 PROMONTORY, Utah — The salt lake flats and deserts of Utah were lit ablaze as NASA and newly-merged Orbital ATK activated one of the boosters which the space agency plans to utilize to send crews to deep space destinations – such as an asteroid and perhaps Mars. The test was carried out at Orbital ATK’s Promontory, Utah, facilities and lasted for a “full duration” burn; in essence, the length of time that they would be fired during actual missions. Wednesday’s test was the culmination of years of design, testing and review which are being carried out to restore NASA’s crewed space exploration capabilities.

QM-1 saw the SRB’s booster motor, as well as its thrust vector control system, tested for two full minutes – starting at 9:30 a.m. MDT (10:30 EDT). This was a hot test, with the SRB conditioned to the upper limit for the propellant mean bulk temperature. Some of the data which will be acquired from this test includes: ballistic performance data, nozzle vectoring parameters, insulation performance, ablative nozzle erosion, vibration acoustic and heat flux data, as well as the performance of new avionics which will provide command and control to NASA’s new heavy-lift booster – the Space Launch System or “SLS.”

“With this test complete, we’re now looking forward to completing the QM-2 test which will check out the booster at cold temps,” said Orbital ATK’s Charlie Precourt. “Once that is finished, next year, we will start transitioning to a stance of producing and delivering the boosters for the EM-1 (Exploration Mission 1) flight.” Each of the boosters measures some 177 feet (54 meters) in length, about the height of a 17-story building.

QM-1 saw some 1,385,000 lbs (628,225 kg) of solid propellant used up in just 120 seconds – approximately 5.5 tons of propellant were consumed every second. Compared to the SRBs used during the 30 years of the Shuttle Program, the rocket motor tested today is capable of generating approximately 20 percent more thrust as well as 24 percent greater total impulse. Each of these boosters is able to impart some 3,600,000 lbf (16 MN) at maximum thrust. A fact sheet issued by Orbital ATK described this as being more thrust than fourteen Boeing 747s at full take-off power.

The QM-1 motor demonstrated the booster’s abilities by handling FSB motor chamber gas temperatures of 5,600 °F (3,093 °C). According to Orbital ATK, at this temperature, steel doesn’t melt – it actually boils!

This is not the first time that the U.S. space agency and Orbital ATK have tested out the five-segment solid rocket boosters. Today’s test, known as Qualification Motor 1 or “QM-1”, was the fourth in a planned series of five tests which will validate the boosters design to fly on SLS. The following is what has taken place to date:

Development Motor 1: Conducted to determine the baseline processes involved with the up-rated version of the booster at ambient temperatures (approximately 80 °F; 27 °C). This test was carried out on Sept. 10, 2009.

Development Motor 2: A little more than a month after DM-1, NASA and ATK tested the booster under far colder conditions, some 42 °F (5.5 °C). This version of the SRB had a thicker nozzle, a full PBI aft dome, AEC ply angle change, triple wrap cowl and improved insulation.

Development Motor 3: This test continued the theme of studying the booster’s reaction to various temperatures with higher temps and loads. The DM-3 booster checked out the configuration at 92 °F (33 °C) and used an SCP cowl, interim internal insulation configuration. The nose cap saw a change in the type of material used and the booster also had the full PBI aft dome and nozzle plug installed.

For QM-1, some 102 test objectives are being carried out using some 531 instrumentation channels. As with the prior tests, the Development Tests essentially validated the design, walking it in. Representatives with Orbital ATK relayed that each test provided a little more data, which then allowed engineers to increase certain areas, strengthening them – and cutting back on other areas, such as with the insulation, and, in so doing, saving mass. With the DM series of tests complete, NASA and Orbital ATK are now testing what will essentially be the SRB used on SLS. Both QM-1 and the next test, QM-2, will use identical boosters – only the temperatures at which they are tested will be altered. QM-1 was a hot test with the rocket motor tested at 90 °F (32 °C). QM-2, by comparison, will be tested cold – at temperatures of approximately 40 °F (4 °C).

“We don’t expect that these boosters will see temps one way or the other (hot or cold) greater than what we test them under,” said Brian Duffy, a four-time space shuttle veteran who is currently employed with Orbital ATK. “We carried out three developments tests which tested the design out at cold, hot and ambient temperatures…We never really expect to see what we call the ‘PMBT’ the Propellant Mean Bulk Temperature, we never expect to see that as greater than 90 degrees.”

SLS is the launch vehicle that NASA has tapped to return the space agency’s ability to carry out missions into deep space – something it has not been able to do since the last crewed mission to the Moon, Apollo 17, completed in 1972. NASA SLS Program Manager Todd May detailed how today’s test firing, was only one part of a test regimen that is still ongoing. Photo Credit: Jason Rhian / SpaceFlight Insider

The booster tested today has quite a heritage as more than 23 shuttle flights relied on components which were used today. The SRB that was fired for QM-1 has also been used on some 10 static tests, which include the Ares DM-1, DM-2 and DM-3 tests. Some of the more notable shuttle missions to rely on these segments include STS-125 (the final re-servicing mission to the Hubble Space Telescope) and STS-135 (the final flight of the Shuttle Program).

SLS will utilize an array of so-called “legacy” hardware during its first flights. These include not only the up-rated versions of the shuttles’ SRBs, but also Aerojet Rocketdyne’s RS-25 (formerly known as the Space Shuttle Main Engine) rocket engines and other support elements which were used during the shuttle era. The design of the solid rocket booster tested today will be used on the initial flights of SLS. The first of which, Exploration Mission 1 (EM-1), is currently slated to take to the skies in 2018. The spacecraft which will ride SLS aloft, Orion, first journeyed into the black in December of 2014. As SLS was not yet ready for the Exploration Flight Test 1 mission, NASA tapped a United Launch Alliance Delta IV Heavy to ferry Orion into the black of space.

If things proceed according to the current timetable, SLS’ core stage should be manufactured and assembled this year. The system should also undergo its Critical Design Review (CDR). Next year should see the final QM test – QM-2 – carried out. In 2016, NASA is planning to test, ship and assemble the booster at Kennedy Space Center in Florida.

In 2017, the integrated core stage (SLS’ central column) will be integrated and test fired at NASA’s Stennis Space Center located in Mississippi. The EM-1 SLS will be stacked in late 2017 with its flight planned for 2018.

Sally
This is not a step forward for space exploration.
To go out and explore/live and work in space, You need affordable lift.
This booster is very expensive. Though big, it does nothing to make Space flight cheaper.
To be less expensive it would have to be affordability reusable. The Shuttle program proved that it cost as much to recover and repack these boosters with fuel as it does to make a new one.

There re-flying these boosters on this SLS Monster old fashion rocket is a waste of our space dollars.

You want to explore space look to Spacex driving down the cost of spaceflight by learning to reuse a rocket booster.
Soon SpaceX and hopefully ULA will be flying and re-flying large methane powered rockets able to be reused many times. Then and only then can we afford to explore places like the moon and Mars.

This rocket test like SLS and Orion is just a way to take our tax dollars while PRETENDING to explore.

There’s no doubt about it, SpaceX with support from NASA, has become a disruptive force in space launch and now also in spacecraft, evidence LM’s recent offering.
Btw, this has been a stated objective of EM since he started SpaceX, to generate competitors and new approaches leading to reduced costs and thereby enabling humans to move off Earth and become truly multi-planetary.
Cheers

My wife Karen and I were there. Congratulations to NASA and Orbital ATK for a job well done! We also met Todd May, and he seems like the perfect guy to be managing the SLS program.