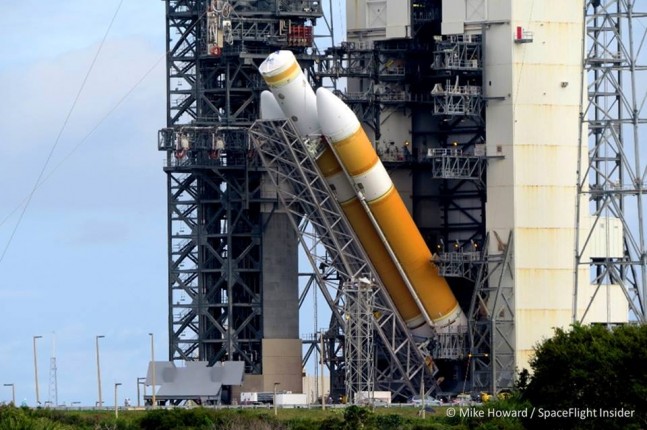 View of the ULA Delta IV Heavy as it is raised to vertical in preparation for launch. Photo Credit: Mike Howard/SpaceflightInsider

ULA’s director of East Coast Launch Operations, Tony Taliancich, said, “This is a tremendous milestone and gets us one step closer to our launch later this year. The team has worked extremely hard to ensure this vehicle is processed with the utmost attention to detail and focus on mission success.” On Oct. 1, the Delta IV was moved to the launch pad, and raised into a vertical position. Crews will now begin the final processing, testing and checking of the rocket prior to launch. During this process, a high fidelity rehearsal will be conducted, including a full power up of the booster and loading of the rocket’s tanks with oxidizer and fuel.

On Sunday, NASA’s Orion spacecraft was moved from the Payload Hazardous Servicing Facility (PHSF) to the Launch Abort System Facility. At the PHSF, the spacecraft received the fuel it needs for its upcoming mission, including ammonia, hydrazine, and high-pressure helium. The next step before flight will be to install Orion’s Launch Abort System (LAS). Orion’s LAS is designed to protect its crew from any potential emergencies during launch. December’s unmanned test flight will employ the use of only one of the three LAS motors — the jettison motor. This motor, used during nominal flights and in case of emergency, is responsible for separating the LAS from the crew module.

NASA’s Kennedy Space Center Director, Bob Cabana said, “We’ve been working towards this launch for months, and we’re in the final stretch. Orion is almost complete and the rocket that will send it into space is on the launch pad. We’re 64 days from taking the next step in deep space exploration.” Once the LAS has been installed, Orion will be complete. The LAS, crew module, and service module will be tested together and held inside the Launch Abort System Facility until mid-November. At that time, it will be ready to roll-out to SLC-37 and stacked onto the Delta IV Heavy.

The Delta IV Heavy, the world’s most powerful launch vehicle, is constructed by ULA at a facility in Decatur, Ala.  The heavy lifter contains a center common core booster, joined with two strap-on common core boosters. An RS-68A Liquid Hydrogen/Liquid Oxygen powers each booster, providing over 700,000 pounds of thrust each. The second stage is propelled by a single RL10 Liquid Hydrogen/Liquid Oxygen engine. Taliancich described the rocket, saying “The Delta IV Heavy is the world’s most powerful launch vehicle flying today, and we are excited to be supporting our customer for this critical flight test to collect data, and reduce overall mission risks as well as costs for the program.”

In December, ULA’s Delta IV Heavy will carry Orion 3,600 miles above the Earth in order to test the vehicle’s critical systems. Orion will be in a highly elliptical orbit and will re-enter the atmosphere at speeds up to 20,000 miles per hour — about 80 percent of the speeds the craft would experience returning from the Moon or deep space. Orion’s ablative heat shield will be subjected to searing temperatures of nearly 4,000 degrees Fahrenheit upon reentry. After it splashes down in the Pacific Ocean four hours after launch, Orion’s crew module will be recovered, refurbished, and reused on a future ascent and abort test in 2018.

Please check back with Spaceflight Insider for updates regarding the upcoming EFT-1 launch. Very exciting good news, it looks like Christmas is going to come early this year – 4 December! Thanks for the great update Amy. (I also found the photo taken from the Apollo 1 platform to be rather moving, it speaks volumes without a word).

I agree Karol, and I’m glad you enjoyed it. That view is just spectacular. It really hit me yesterday how close we are to this launch. I can’t wait!

Will this stand there for two months now? Is this really the best way to do things?