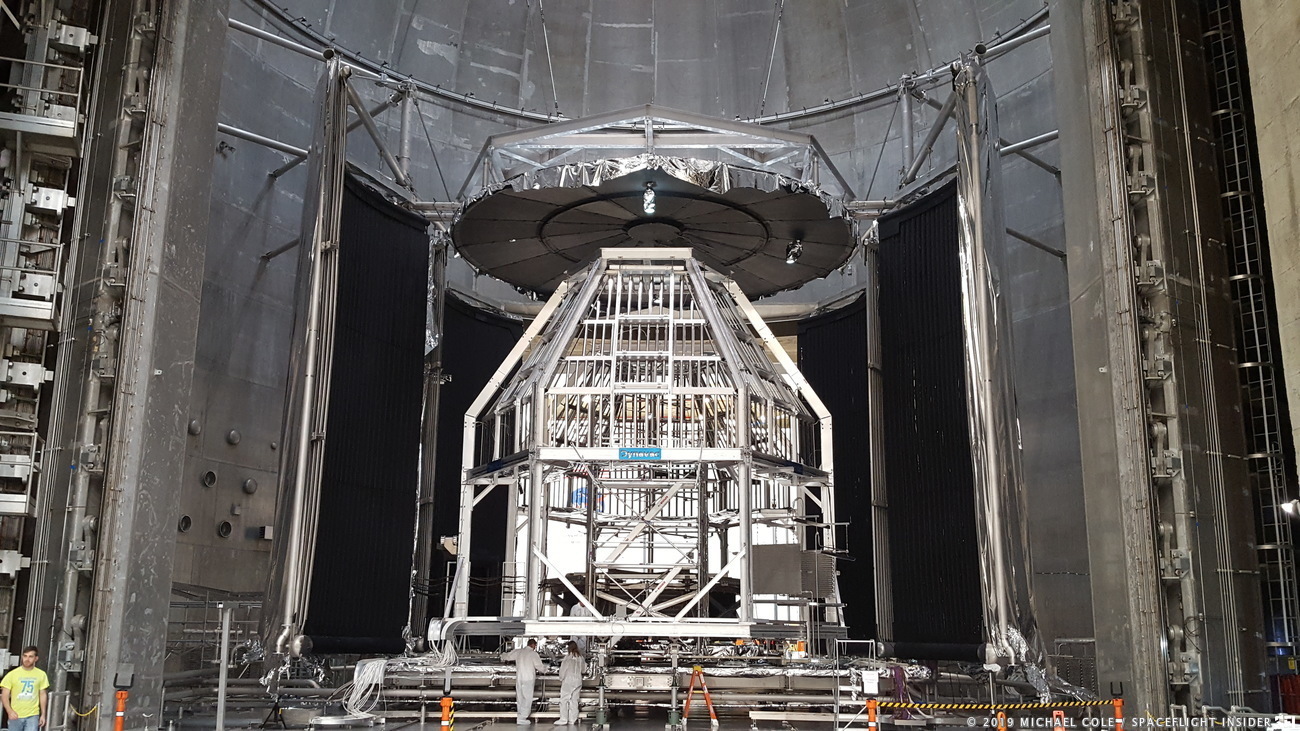 The Dynavac heat flux system sits inside the giant thermal vacuum chamber at NASA Plum Brook Station’s Space Power Facility. The specially built cage-like heating system is awaiting the arrival of the Orion spacecraft for a campaign of thermal testing in the facility. The spacecraft is scheduled to arrive at Plum Brook Station in mid September. Photo Credit: Michael Cole / SpaceFlight Insider

PLUM BROOK, Ohio — NASA is making important strides with the Orion spacecraft in preparation for the Artemis 1 mission, the next step in the agency’s effort to return humans to the Moon.

The mission, currently scheduled for launch in the Fall of 2020, will be an uncrewed flight test, with the Orion spacecraft launching for the first time atop the Space Launch System (SLS) rocket. The mission will take Orion thousands of miles past the moon on an approximately three-week test flight.

Before that flight, an army of engineers and technicians at two NASA centers — Kennedy Space Center (KSC) in Florida, and the Plum Brook Station testing facility in Sandusky, Ohio — are preparing to put Orion through a rigorous final round of tests that will get the spacecraft ready for launch.

The Orion crew module and the European Service Module (ESM) are currently at KSC’s Operations and Checkout Building. The two modules are scheduled to be integrated in mid July in the Final Assembly and Systems Testing (FAST) cell. The integrated spacecraft will then be loaded up aboard the Super Guppy transport aircraft and flown to Ohio for its test campaign at Plum Brook Station in the Fall.

Getting to the phase of integrating the two modules at KSC is a big step, and has been a long time in the making.

The seven pieces of the Orion pressure vessel were welded together at the Michoud Assembly Facility outside New Orleans, and arrived at KSC in February of 2016. The module was then outfitted with all of its subsystems — propulsion, environmental control, life support, avionics, navigation control, landing and recovery. All of the subsystems were assembled and installed at the Operations and Assembly Building. The crew module then went through its initial thermal and acoustic testing.

“In addition to the two environmental tests,” Marasia told SpaceFlight Insider, “the crew module also went through a battery of functional testing for each of the subsystems to make sure that everything works — the avionics, the computer, power, and data units — so that we are sure everything works together as an integrated spacecraft.”

The heat shield was then installed in August of 2018. From there, the various pieces of Orion began to come together.

“We just finished some vital testing of the propulsion subsystem,” Reed said. “So we are in a really good position to work between now and mid July to be ready to mate it with the crew module.”

The mechanical/physical mate of the two modules is approximately a four-day operation.

“Then we have an umbilical that goes between the two that has electrical harnesses, coolant loop lines, pyrotechnic lines, and others,” Marasia said. “That connection takes another four days approximately.”

The KSC team will do about three and a half weeks of integrated testing to essentially make sure the two modules are talking to each other as they were designed. Some mission profile testing will follow.

All of the integration testing occurs in KSC’s Final Assembly and Systems Testing (FAST) cell.

“This is the first time we are mating these two modules together,” Marasia said, “so there are potentially some unknowns out there we will have to work through. But right now the plan is to start the packing and shipping of the spacecraft around September 10, and it gets to Plum Brook on the 14th or 15th.”

The integrated spacecraft stack will be loaded aboard the Super Guppy transport aircraft, which has been fitted with a special Orion Crew and Service Module Horizontal Transporter (CHT) to move the spacecraft in and out of the plane’s giant hold. The Super Guppy will fly to Mansfield, Ohio, landing at the Mansfield Lahm Air National Guard Base, home of the 179th Airlift Wing. After off-loading it will take a full day to transport the spacecraft up the road to Plum Brook Station.

“It will take two weeks once it’s here to offload it and stand it up on the verticator,” Nicole Smith, Project Manager for Orion Testing at Plum Brook Station told SpaceFlight Insider. “Then we will be in about four months of testing once it’s up here.”

The centerpiece of Plum Brook Station’s world-class testing prowess is the Space Power Facility, which features the largest thermal vacuum chamber in the world. Inside the giant chamber, a specially designed heat flux system, which looks like a giant cage in roughly the outline of the spacecraft, is awaiting the arrival of Orion.

“It was built by Dynavac in Massachusetts,” Smith said. “They shipped it here and assembled it here, and then we’ve been in the process of checking it out over the last several months. It’s all new. It’s a beast.”

Sitting in the middle of the heat flux system currently is the thermal calibration assembly, affectionately called the Christmas tree. On the ends of the “Christmas tree’s” prongs are 78 sensors at roughly the outer mold line of the Orion spacecraft. Over the last few weeks, Plum Brook engineers were running what are called chamber certifications. Lockheed, the prime contractor for the Orion crew module had its engineers at Plum Brook looking at the data.

“We have all the thermal engineers on Lockheed and NASA’s side and our facility folks, making sure that we can provide the temperature environment at the surface of the vehicle that they are going to want to see,” Smith said. “So it was like a big checkout of the whole setup integrated together. Basically everything except for the spacecraft. So this is how we try to buy down risk so that we don’t have the spacecraft getting here and something doesn’t work right. We want it to go as easily and as smoothly as possible.”

The first configuration the Plum Brook engineers will do in their tests with the heat flux system is the tail-to-sun configuration. All the heaters will be turned on at the bottom so that it simulates heating the under side of the spacecraft as it is flying away from the Sun toward the Moon.

The Dynavac heat flux system will also be surrounded by a movable cryogenic shroud to simulate the cold temperatures the spacecraft surfaces will experience when shaded from the Sun. The cryo shroud will take Orion down to about -255 degrees F. It is capable of going as low as -280.

“The one thing that is unique about the thermal testing part of Orion is that it’s a combination of heat and cold with Orion,” Robin Brown, Facility Engineer at Plum Brook’s Space Power Facility told SpaceFlight Insider. “And that we don’t do very often. In fact this is the first time we’ve done a combination of heat and cold since the Space Station testing back in the 90s. This particular case, it’s really a heating system surrounded by a cold system and we can move the heat around in relation to the cold. And then we can simulate the shading effect or the movement of the sun in relation to shade on the vehicle.”

Testing for the temperatures of deep space is a little different than what a spacecraft experiences in orbit around Earth.

“In low-Earth orbit the temperature extremes are not quite so much,” Brown said. “It’s every 90 minutes going through that cold cycle. You don’t cold-soak maybe in quite the same way that you do if you’re out on a long duration journey.”

“After that we will re-pressurize the vacuum chamber, roll the spacecraft back out, pick the two halves of the heat flux cage off, and then we get Orion ready to do the electromagnetic testing,” Smith said.

The thermal vacuum chamber will not be pumped down during the electromagnetic testing, which tests whether all the electronic devices aboard the spacecraft are operating properly, and not creating electromagnetic interference that will hamper their operation or efficiency.

“That takes about a couple of weeks,” Smith said. “Then we get it back out and get it ready for shipment back to the Cape.”

When Orion comes back to KSC, early next year, it will go through about two months of final closeout work. The solar arrays will be installed. The spacecraft adapter jettison fairing, a fairing which encapsulates everything below the crew module, will be attached. Some additional spacecraft performance tests — functional tests to test out each subsystem to make sure everything is still working after the transportation — will be conducted.

At that point, Orion for the Artemis 1 mission will be done with integration and testing. It will then be turned over to the Payload Hazardous Servicing Facility for fueling, followed by mating with the Launch Abort System, and eventual integration with the SLS launch vehicle.

Delays are possible throughout this process, as well as with the development of the SLS rocket, so a date for the launch of Artemis 1 has not been set. The latest estimate has it occurring in the Fall 2020 time frame.

The Artemis 1 mission is the next step in the Trump Administration’s larger goal of placing American astronauts back on the Moon by 2024.