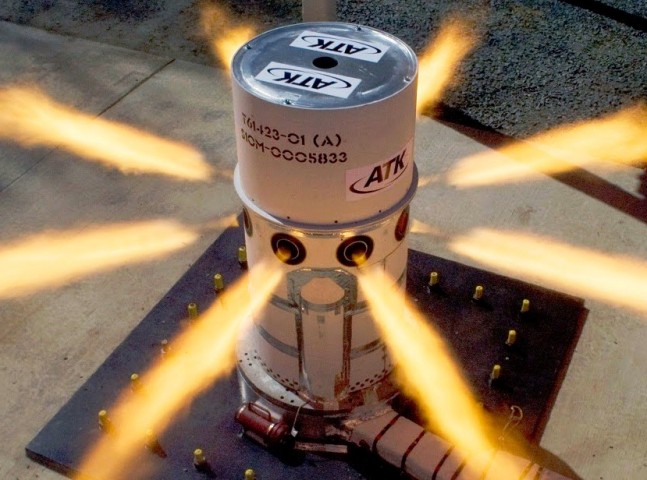 On July 7, Orbital ATK announced that it had entered into a $98 million agreement with Lockheed Martin to construct the Launch Abort System (LAS) for the Orion spacecraft that Lockheed Martin is building for NASA. This part of Orion will only be used in the event of an emergency, pulling crews to safety – an essential requirement as NASA works to send astronauts to distant destinations.

The primary goal of this arrangement is to finish the design, development, testing, and qualification of the LAS. Orbital ATK is required to conduct structural tests, loads tests, igniter open air tests, and motor static firing tests.

Orion has already taken to the skies once, with an inert LAS affixed to the top. In December 2014, NASA, Lockheed Martin, and United Launch Alliance sent a flight test article of the capsule-shaped spacecraft some 3,600 miles above the Earth. Shortly after leaving Earth’s atmosphere, the LAS was jettisoned. “Orbital ATK is proud to be a key contributor to the Orion program and to astronaut safety,” said Orbital ATK’s Vice President of Propulsion Programs Fred Brasfield. “The benefit of using a solid launch abort motor is being able to transport the crew far from harm’s way in milliseconds, should the need arise.”

Perhaps of greater note is the view of another Orbital ATK representative, one who himself has traveled into orbit four times.

The LAS is produced at Orbital ATK facilities in Magna, Promontory and Clearfield, Utah. Systems for both SLS and Orion are manufactured in 47 states. The device is used in the event of an emergency, pulling crews to safety during launch or ascent.

Orbital ATK will also carry out tests to validate the LAS design for actual flights into the black. The $98 million will pay for LAS to be produced for Orion through the flight of Exploration Mission 2.

The LAS’ second flight, AA-2 is currently slated to take place during GFY19. This test will serve to demonstrate the design’s ability to conduct a high-altitude abort.

Orbital ATK is also working with Lockheed Martin to produce the LAS’s attitude control motor. This development and testing will culminate in the Exploration Mission 1 test, currently slated to take to the skies in the 2018-2019 time frame.

“Orion has conducted successful tests with the launch abort motor,” Orbital ATK’s Kent Rominger said. “That system was designed to get the capsule away from an explosion, and designed to keep the crew away from the debris field – it does that. Liquid systems that have been demonstrated to date don’t quite do that. If you want the best protection to get the crew away from the stack, the solids have proven to ignite faster and work the best.” Orbital ATK’s Kent Rominger said. “That system was designed to get the capsule away from an explosion, and designed to keep the crew away from the debris field – it does that. Liquid systems that have been demonstrated to date don’t quite do that.”
Orbital ATK DOESN’t need to cheap shot SpaceX’s hyper golic system. Agreed solid ignition is faster, milliseconds vs full power in 1/3 of a second for SpaceX.
SpaceX has conclusivly proven that they can get away from the Falcon 9 debris field during an on pad abort and will test for a high velocity abort in the future and adjust as needed if needed.
What the SLS escape system may need to ajust for is use while the SRB’s may be disconnected and still firing continuing to accelerate. In any case the much more powerful SLS must have a longer duration escape system due to the possibility of much higher momentum of debris creating a much larger debris field.
Kent I’m sure most people agree that Orbital ATK is without doubt the leader in solid rocket propulsion. There’s no need to critisize other systems just because they’re different and used on different rockets. I’d expect a spokesman for a leading rocket manufacturer to be above that.

You are quite right, any more than Space X needs to do the same at NASA’s expense as they did repeatedly after their “successful” launch. What interests me is why nobody is talking about the difference in attitude control and stability between the two systems.They are quite different in that regard.

physics calculation … distance = 1/2 acceleration * (time)^2
assuming a body pulping 100 gees (981 meters/sec^2) for 10 milliseconds results in about 0.05 meters of relative displacement
marketing calculation … “The benefit of using a solid launch abort motor is being able to transport the crew far from harm’s way in milliseconds, should the need arise.”