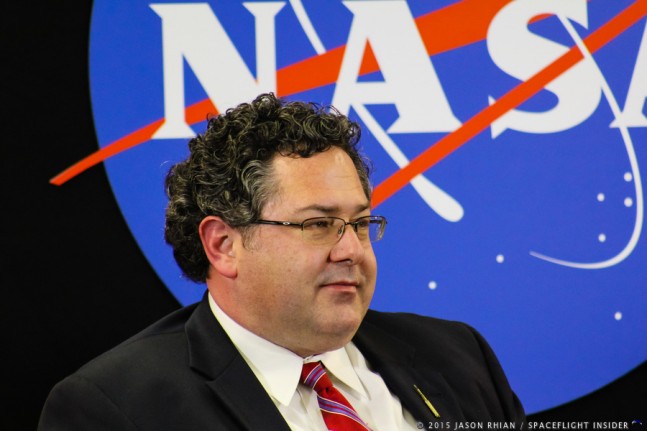 In this second part of SpaceFlight Insider’s exclusive interview with NASA’s Space Launch System (SLS) Program Manager, Todd May, he discusses the thought process behind developing different versions of the new super heavy-lift booster. The Block A, B, and other versions of SLS are each capable of handling diverse aspects of NASA’s various programs meant to manage deep space exploration efforts.

NASA is in the midst of a Critical Design Review (CDR) for the Space Launch System that, according to May, recently had some 450 different parties, each working to ensure the success of the rocket. When SpaceFlight Insider spoke with May about a month ago, the space agency was almost finished with what is known as the pre-RIDs or “Review Item Discrepancies”. May noted that none of these items suggested that the team working on SLS was in a “bad place”.

May: “A Critical Design Review for any spacecraft or launch vehicle is a fairly significant event. That is, essentially, saying that you have completed the design, and you’re working on a little bucket list of things that you are headed toward design certification.

“One important thing that your readers should know is that we haven’t had a review of this type in over 20 years. The last one we had was for the International Space Station, which was a fairly complex design. Before that? It was the Space Shuttle, which was conducted in 1977, I believe, so it’s been almost 40 years since we’ve had a Critical Design Review for an exploration-class rocket.” SpaceFlight Insider: Talk to us about Block 1.

May: “So the Block 1 design, I believe your readers are familiar with it, it’s the four SSMEs [Space Shuttle Main Engines or RS-25s] and the core stage at twenty-seven and a half feet across and then the five segment SRBs (Solid Rocket Boosters) and then the ICPS upper stage. It can aloft Orion and crew to the Moon – to a deep retrograde orbit. It can send about 26 metric tons to trans-lunar injection.

“I’m not sure if we have discussed this before, but that also includes secondary payloads. We have already baselined 11 slots in what we call the MSA [Multi-Stage-Adapter] the (inaudible) stage adapter to deploy what are called ‘6-U’ CubeSats. We’re actually at the point now where we believe that we have all of those spots spoken for, and we’re asked to be considering adding more. This provides these CubeSats with an opportunity to do missions that they weren’t able to do before.”

SpaceFlight Insider: On Apollo 7, which took place in 1968, NASA used a Saturn 1B, which wasn’t used again until 1973. Could a less-powerful version of SLS be used to just send crews to orbit and then a more-powerful version be used to hoist core elements of the larger spacecraft on a separate flight (presumably launched prior to the astronauts)?

May: “The Block 1B, with its twenty-seven and a half foot diameter upper stage, is what we refer to as the 105 metric ton class rocket. It’s actually capable of hauling about a 118 metric tons to LEO. Now, I say that because there’s a neat little trick that happens when you add that upper stage, and you set that Orion height even for the Block II. What is placed up under Orion is called the Universal Stage Adapter [USA]. What that means is, even with the crew, you now have the volume to put other things.

“So, you can even have a small habitation module up under there, or the ARM [Asteroid Redirect Mission] or a robotic probe of some type for a science mission and things like that.

“This is a chart that [William] Gerstenmaier (NASA’s Associate Administrator for Human Exploration and Operations) showed to the NAC, the NASA Advisory Council and I wanted to make sure that our readers had access to it. They can see the small figure that represents a person – that provides you with a sense of scale. What’s different from this and Block 1 is – if you’ll note the element on that chart that says ‘Exploration Upper Stage’ – there’s a hung LOX [liquid oxygen] and then a hydrogen tank up above it.

“So that upper stage has four 25 to 30 k class engines up under it. That rocket can loft 40 metric tons to translunar space, and so you got 26 metric tons of Orion, the USA does have its own mass, so there’s a bit of a penalty there. However, the additional mass that you can do in that interim volume down there is anywhere from five to ten metric tons. This is nice because you’re getting a two-for-one, you’re getting Orion, plus you’re getting some volume for [the] long-duration stay or some deep space station or something of that nature.

(Again referring to this PDF) “Now all the things that you see as you move to the ‘right’ there, of course, you see the two configurations for Orion for the ARM mission or some type of exploration payload there, or you’re possibly talking about something like a Europa mission. If you see the first one, it says ‘interplanetary potential’. We’ve talked about going to Europa. With current rockets today, it takes almost seven years to get there. If you were to use a Block I, you could get there in two and a half years – you also would have a lot of volume and a lot of mass. So SLS really is capable of changing the game in terms of deep space science.” SLS is being considered for an array of roles outside of just being the primary launch system for NASA’s Orion spacecraft. Image Credit: NASA

SpaceFlight Insider: We’ve seen the animations suggesting a robotic system traveling through the ice to explore Europa’s ocean – how realistic is it that SLS could enable something of that type?

May: “That’s the nice thing about having this capability – and it’s what I mean about changing the game – it gives you a degree of freedom when you’re doing the trades. So, if you wanted to trade some of that accelerated timeline to get there, if you didn’t mind taking longer to get there, well you can triple your mass. In other words, if you wanted to add all of these pieces, it might take you a little longer to get there – because you can trade time for mass.

“You can also trade volume, so, today, the James Webb Space Telescope folds up like origami, any rover that you wanted to send to Mars folds up in a similar manner. Can you imagine not being required to have to fold a spacecraft up, to making it big and robust. This would mean that spacecraft wouldn’t have to be so fragile.”

Is this talk available online as audio?

Good article….The only issue the cost of each mission…and the flight rate….

I find it slightly ironic that NASA is wrestling with whether or not to “man rate” the ICPS, given its heritage. NASA Administrator Mike Griffin was dead set against EELVs being used to launch crew, yet the first (unmanned) flight of Orion was on Delta IV and its upper stage is the basis for the ICPS.