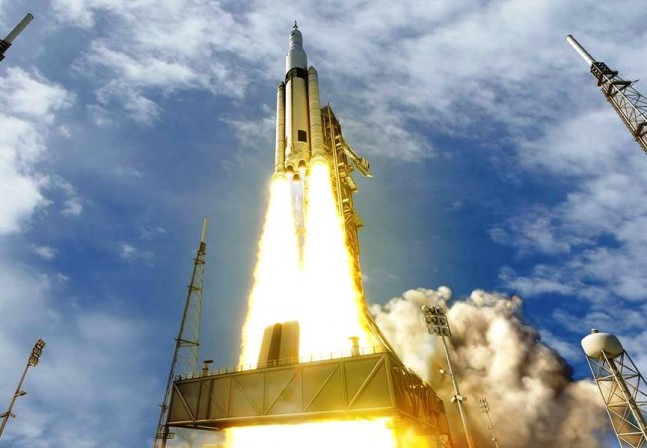 NASA's SLS Program Manager, Todd May, discussed the various versions of the super heavy-lift booster in an exclusive interview with SpaceFlight Insider. During which he provided details about the new rocket – and how they will be used. Image Credit: NASA

Based in Marshall Space Flight Center in Huntsville, Alabama, May is in charge of the nationwide team of contractors and engineers who are working to provide NASA with some of the assets required to send crews to destinations beyond low-Earth orbit (LEO). These include a mission to collect a boulder from an asteroid and place into lunar orbit, a possible mission to Mars, and also an automated mission to Jupiter’s moon Europa. SpaceFlight Insider: Thanks for joining us, Todd, we know how busy you are and appreciate you taking the time to tell our readers a bit more about the different versions of the SLS and how they will be used.

May: “Not a problem, besides, it’s been a while since I spoke to you out at QM-1 (May was one of the guests interviewed during the March 11 Orbital ATK Qualification Motor test in Promontory, Utah), I’d like to give you a little bit of a status update since I last talked to you guys. I want to tell your readers a bit about Block I, Block IB, and about Block II – and their capabilities.”

SpaceFlight Insider: Excellent, well, why don’t we start there first – what is the latest with the Block I and II versions of SLS?

May: “When I saw you out at QM-1, I can’t remember if we spoke before or after the test fire, but, of course, the firing went off well, and that was one of our big events for the year, [which] was to get QM-1 behind us successfully. The data has now come back from that test, and it is all looking really good to us.

“All of the objectives that we had were met. We wanted to check out the avionics; we were testing the new throat plug design. We had a couple of anomalies on DM-2 and 3; this dealt with eccentric erosion on the nozzle. So, we had to have new slings in the middle to hold it at the right height so that it didn’t sag and then, of course, we had been chasing what we call the UEEC, or the voids that we were getting along the bottom lines of the insulation in the propellant.”

SpaceFlight Insider: Quick question, does Orbital ATK feel that they have a good handle on what caused those to form and that they can mitigate them in the future?

May: “I think that we feel really good about, where the voids were coming from, and a solution to mitigate the voids; we have poured a number of insulation liners now since QM-1, and everything is coming out cleaner than it ever was on shuttle. On [the] shuttle, we were seeing, on average, anywhere between 30 to 60 voids in every segment – small voids. The last couple that we’ve seen? We haven’t seen any voids – at all. To me, it’s looking really good; we think that we’ve got a real handle on the void situation.

“Of course, we won’t claim victory until we get through QM-2; we have a second qual-motor firing, and that’s why we’re doing two. We have also got some additional testing that we’re doing at full-scale on; if you did get a void, what is the damage tolerance of voids, and things like that.

“Since this is human spaceflight, you want to make sure we really got a handle on it. We’re not done yet, I don’t want to claim victory, but we felt really good on the day that we got through QM-1.” SpaceFlight Insider: What other major efforts are underway in terms of SLS?

May: “The next big thing that I think I mentioned to you is we wanted to get the new controller for the liquid engines on the stand at Stennis. We had done a test this past January. We only tested one side of the controller because we had some ‘cross-talk’ between the two sides. We fixed that problem and got the engine on the stand, with the fix and then ran another, full, mission-duration burn.

“This rocket has a higher inlet pressure than we saw on shuttle, so we were testing at higher inlet pressures and we lowered the start box pressure because if you think about the orbiter, the liquid engines are offset from the External Tank, so we weren’t as efficient in getting the fuel and oxidizer to the engine, so everything would come in warmer. We’re much more efficient on SLS because everything is right there below the hydrogen tank. “We want to make sure we can start the engines at the lower temperatures, so we have been expanding the start box. That test went well also; we went full mission duration again. So that was another big thing for us, getting that behind us.

“So, again, we’ve tested with the new avionics and we started to test all the new inlet conditions we expect these engines to see on SLS.”

SpaceFlight Insider: For some of our readers who might not be as familiar with all of the terms – can you please let them know what “cross-talk” means?

May: “Sure, in avionics, spacecraft, and rockets, you have an ‘A’ side and a ‘B’ side – it’s for redundancy; there’s a voting scenario and it votes on the data that it is getting, and if one goes bad, the other takes over.

“We were noticing that when we were putting it through its paces, that when you ran the ‘A’ side, the ‘B’ side was picking up [a] signal it wasn’t intended to. This was in the first development unit that we made, so we decided back in that first test we conducted back in January to just run it on the ‘A’ side.

“During QM-1, we ran both channels and purposely failed one side – to watch it switch over to the other side. We proved that the cross-talk that we had seen, the signals that we were seeing on the other side, were no longer there.

“When we first went back and looked at it, we noted that we had a design flaw… it’s called a ‘Development Controller’ for a reason – it’s not meant to be the final version; it’s good enough to run the test on –which is what we did. We found something and fixed it.”

I don’t have any knowledge of rocket engines, but the voids that were mentioned, are those the kind of problems that are alleviated with the addition of white noise like John Bennewitz and Dr. Robert Frederick spoke about in their paper “Application of High Frequency Pressure Disturbances as a Control Mechanism for Liquid Rocket Engine Combustion Instabilities”? If not, has this concept played a role in increasing reliability in other ways?

Alex Grutter. The voids mentioned are only in the solid rocket propellant. Think bubbles.

What do you think about UAH’s advances with hybrid rocket motors? A graduate student just published a new paper in the last month or so.