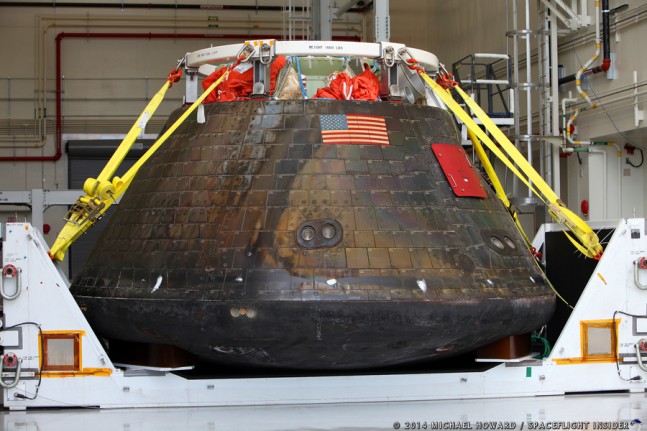 NASA’s Orion spacecraft should offer crews that fly on the capsule excellent visibility and extra protection, too, as they journey to missions beyond low Earth orbit, to cislunar space, and elsewhere, as well as to the International Space Station if required. Traditionally, the windows of crewed spacecraft, such as the Apollo capsule and the Space Shuttle, have been made entirely of glass. However, for Orion, engineers are taking a new approach that will make the vehicle’s windows not only stronger but also lighter and less expensive.

Windowpanes in spacecraft must be strong enough to function as part of the pressure shell protecting the astronauts and, at the same time, be able to withstand temperatures up to about 1,000 °C during re-entry.

Adequate structural integrity is achieved by using multiple panes of glass. High-temperature quartz glass, as used on the windows of the Shuttle, as well as the Russian Soyuz capsule, and now on Orion, can handle such temperatures, together with rapid heating and cooling, without cracking. However, as Lynda Estes, Orion window subsystem manager at NASA’s Johnson Space Center in Houston, points out: “The insidious thing about glass is that it’s a poor structural material. If you put loads on it, it will lose strength over time, and if you get a ding on it, the strength is dramatically decreased. The spaceflight environment is one that, unfortunately, exploits these vulnerabilities.”

Many materials are structurally tougher than glass, but most lack that other vital quality needed by any useful windowpane – transparency. In their search for an alternative, engineers experimented, in the early days of developing Orion, with polycarbonates. Along with a variety of plastics, these were evaluated as a possible replacement for glass on the spacecraft’s inner panes.

Among NASA’s technical stipulations was that whatever was used in place of any of the glass panes in Orion’s windows must have optical properties that were not significantly inferior to those of glass and that, in particular, allowed high-resolution imagery using cameras pointed through them. Although polycarbonates were deemed optically clear enough for piloting purposes and photography using cameras with lenses of aperture up to 25mm, they failed the hi-res imagery tests.

Instead, Orion engineers turned to acrylic plastic. This material is now commonly used in public aquariums, thanks to its ability to withstand the constant high loads placed on it from the vast amounts of water in the tanks and also the bumps, bangs, and pressure variations coming from visitors on the other side. NASA is currently planning on launching the second Orion spacecraft on Exploration Mission 1 in November of 2018. Image Credit: NASA

Acrylic meets NASA’s high optical transmission standards and is better than glass at maintaining its strength if it gets the occasional scratch or ding, making it ideal for the inner panes of the new spacecraft’s windows. This last fact is important in helping trim some weight off the vehicle. Because acrylic retains its structural integrity better than glass if it suffers minor damage, fewer panes of it are needed to supply the same overall strength and level of redundancy. On top of this, acrylic has only half the density of glass, so the potential mass savings are considerable.

At present, Orion is equipped with four large windows in the conical crew module for forward and horizon views, and other, smaller windows from which to look out from the docking hatch and the side hatch. The windows in the cone consist of three panes. For Orion’s inaugural test flight (Exploration Flight Test 1), on December 5, 2014, the outer two panes were of glass and the innermost of acrylic.

“The use of acrylic pressure panes reduced the weight of the window subsystem by more than 200 pounds,” Estes said.

Estes and her colleagues will now carry out more experiments on the thermal integrity of the acrylic panes to find out how well they stand up to repeated expansion and contraction and exposure to high temperatures.

Currently, NASA is planning on using Orion to send crews to an asteroid and, perhaps, one day to a larger spacecraft bound for the planet Mars. (Click to enlarge.) Photo Credit: NASA/LMCO

If the results are satisfactory, the middle, thermal glass pane may also be replaced by an acrylic one resulting in another saving of at least 30 pounds. Keeping the mass of a spacecraft down to a minimum is crucial because it translates directly to fuel savings and, therefore, to the cost of placing the vehicle in Earth orbit.

Another aspect of evaluation by engineers back on the ground will be to carry out a so-called “creep test” of the acrylic panes. Orion is designed with long-duration missions in mind – to the vicinity of the Moon and beyond, into deep space, possibly to rendezvous with a near-Earth asteroid or take part in an excursion to Mars.

A potential weakness of acrylics is how they handle sustained loads over many months, so to explore this aspect of the material a pane will be subjected to a pressure load to simulate what it would experience during a nine-month-long trip in the vacuum of space.

If all goes well with the further tests this year, more acrylic will be introduced into Orion’s windows with a move to two acrylic panes and one of glass. The result will bring savings to both the mass of the spacecraft and the cost of building the vehicle as acrylic is markedly cheaper than the specialist glass needed.

Having said this, Orion program managers have trimmed more than $2 million to date by effectively using recycled glass. At the end of the Space Shuttle program, Estes had all the stock glass remaining from that project handed over to Lockheed Martin, NASA’s prime contractor for Orion. At least while these stocks last, then, the windows for the new craft will be economical to make, from the point of view of both their glass and plastic components.

Research and development of the new window materials and configurations for Orion is a joint enterprise of NASA and the Commercial Crew Program (CCP), tasked with facilitating access to low Earth orbit, including the ISS, via privately operated crewed vehicles. Glass may still have its part to play in future space vessels, but it looks like this millennia-old product of sand has increasing competition – a high-tech upstart from a lighter, cheaper, and more durable alternative. NASA is investigating new materials for use on future iterations of Orion. (Click to enlarge.)
Photo Credit: NASA

they can save even more weight adopting the “underside-LAS” that I’ve proposed in 2007 * http://www.gaetanomarano.it/articles/020newLAS.html * (now called the “pusher LAS”) instead of the bigger, heavier, expensive and dangerous Tower-LAS, that may also allow NASA to build a smaller service module, EDS and SLS

David – the link below provides a close up of Orion’s windows for your readers to see more detail if they are interested.
http://www.nasa.gov/feature/orion-windows-provide-new-outlook-for-spacecraft-s-future

You can also see some pictures of Earth from Orion during the December flight on Flickr at: https://www.flickr.com/photos/nasaorion/sets/72157641969853204/

I have read of Aluminium oxynitride (transparent crystalline material used in high-strength bullet-proof products). I wonder if this was considered as a window material. I’m not sure what the weight is compared to glass or acrylic but it is said to be ‘relatively light’. Do you happen to know if NASA looked at this?

I too was wondering if they looked at transparent aluminum (which, btw to others reading this, is real, not just something mentioned in sci-fi like Star Trek IV).

I also wondered if they looked at synthetic sapphire glass.

Hi, yoou asked about transparent Aluminium, there is a product on the market currently. It is used in some bullet proofing and vests trademark is ALON.

What are the commercial crew windows made of?

Nice article but it implies that NASA just discovered LEXAN and Plexiglass. Those materials have been around for a long time. Maybe NASA has to re-address the science requirements on the windows.

David, please remember, Orion is not going to the International Space Station. Those requirements were removed with the shift to the Beyond Earth Orbit (BEO) mission. I would suggest you correct your first paragraph.

One have to contemplate for the heat generation for any atmosphere similar to earth, it gets pretty hot LEXAN and Perspex would melt and the radiation degradation space thermal cycling etc.

What materials are used for the whole Orion spacecraft, not just for the tiles of the command module?