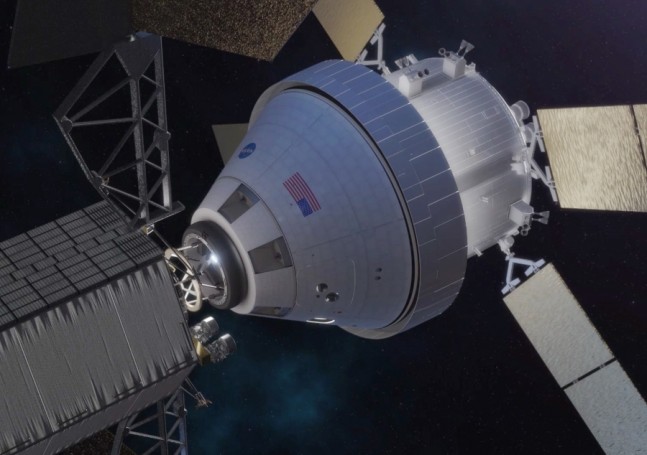 In April of 2010, President Barack Obama announced that NASA would take a new direction, part of that new path would include a crewed mission to an asteroid. This past week, NASA announced that it has made progress toward what that mission would actually look like. NASA’s Associate Administrator Robert Lightfoot spoke with members of the press on Thursday, Dec. 17 regarding progress that has been made to select the mission profile that would be used to capture an asteroid, tow it back to cislunar space – and then have astronauts travel to it. The mission is called the Asteroid Redirect Mission or “ARM” – and it recently completed a review to determine which path is best to carrying this effort out.

In February of 2014, NASA had a mission feasibility discussion and determined that there were two options for capturing an asteroid and returning it into cislunar space where astronauts could then use SLS and Orion to go learn how to travel to a celestial body-type like an asteroid.

The first option, which Lightfoot described as being very similar to a study released by the Keck Institute would have seen an asteroid that was discovered by radar to be carrying out a close approach of Earth and would have been redirected toward the desired location. If NASA’s opts to go in this direction, asteroids 2009 BD, 2011 MD and 2013 EC20 – are the most likely candidates with 2009 BD coming in at about 13 feet (4 meters) in size and 2013 EC2- 7 feet (2 meters). Artist’s concept for Option “B” for the ARM initiative. Image Credit: NASA

The second possible option would see a boulder taken from a larger asteroid and bring it back. At present, there are three possible candidates for this version of ARM. Itokawa, Bennu and 2008 EV5. Given that the Japanese Aerospace Exploration Agency (JAXA ) has already visited Itokawa via its Hayabusa probe and its characteristics are fairly well understood – it is the a good candidate if NASA decides to head in this direction. Itokawa is known to have boulders that are about 10 feet (3 meters) in size. Lightfoot noted that while this mission would be more complex – it would also serve to test and validate the types of technologies that the agency requires. Each of these options was reviewed at length, including the level of autonomy that the spacecraft would be required to have, the guidance navigation and control for the mission, scheduling, cost and so on.

“Both of the options were feasible, but they needed some risk-reduction activities to occur,” Lightfoot said. “We also thought we could engage the community and we did several announcements where we brought people on board to see what thoughts they had on both options.”

NASA collected the data that it could as to specifics on each of these options and then proceeded with the final determination as to which of the two would be chosen. NASA had hoped to have this accomplished for the Mission Concept Review – which is currently scheduled to take place in February of 2015. An official launch date for ARM is also likely to be made during the MCR.

Lightfoot stated that both options are still essentially on the table and that he would need more information before a final determination 1s made. Lightfoot went on to state that he spoke with NASA’s Administrator Charles Bolden and that the decision to hold off until a final decision could be made was mutual.

With the completion of NASA’s Exploration Flight Test 1 (EFT-1) mission, the next planned element of the agency’s crewed deep space efforts – is Exploration Mission 1 or “EM-1.” EM-1 is currently slated to take place in 2018 (along with the Ascent Abort 2 test). EM-2 is currently planned to take place three years later in 2021, with ARM taking flight in 2024. Even though these elements are stretched out over the course of the next decade, SpaceFlight Insider was asked if NASA would develop a “program” to cover its evolving human space exploration efforts. The first option that NASA looked at was capturing a small asteroid and bringing it into cislunar space. Image Credit: NASA

“We are working on showing how all three of our major spaceflight mission directorates, including aeronautics in some respects, lean toward this goal of what we call ‘Pioneering Deep Space,'” Lightfoot noted. “We really want to take humans outside of low-Earth orbit – it gives us an opportunity to take advantage of the International Space Station, you know, everything out of it while it is still there.”

Lightfoot noted that with what knowledge the space agency learns in LEO, can then be used in a kind of “proving ground” around the Moon and that from there NASA will work to test out the capabilities so as to conduct crewed missions to Mars.

Does NASA really think ARM will take place in 2024 – eight years after the end of this administration and at what confidence level? One flight every 2 – 3 years? Did not NASA’s Aerospace Safety Advisory Panel suggest that NASA needs to fly at least once a year? If you were in the White House and NASA told you they would fly every 3 years – would that cut it for you?

In the interim, NASA can practice by capturing some of the space junk in orbit around the earth, and deorbiting it. Let’s deal with these manmade asteroids first.

Certainly the asteroid capture project has neither the interest nor the support of most people. With polls showing that most people would rather see a return to the Moon, NASA is justified in attempting to place the captured rock into Lunar orbit. This will allow astronauts to venture back to within the Lunar environment, perhaps making the mission more pleasing to the general public. From what else I have read even a lot of politicians are not in favor of the asteroid project. The idea that the Pres put forward: Been there done that, does not really apply. We have hardly done any real exploration of our closest neighbor. It would prove a better learning field to move on to Mars. Give us a lander instead of an asteroid!!!!!!!

Space in general has neither the interest or support of most people. American Idol is much more prominent in the minds of the general public. Most of those interested in space are horribly innumerate — I often see “space cadets” calling for research in faster than light warp drives (for example).

Human expansion into space won’t occur until we exploit space resources profitably. This may not even be possible. But I give Planetary Resources and/or Deep Space Industries even odds. Developing a robotic retrieval vehicle with robust solar powered ion engines would go a long way towards helping this entities. Space enthusiasts should support development of the vehicle called for in the Keck report.

As for a practice field for Mars? I don’t see either the asteroids or the moon as an intermediate step to Mars. Men on Mars is a completely worthless near term goal.

According to the 23 December “Daily Launch” of the AIAA, it was reported in the January 2015 issue of GQ that Buzz Aldrin is upset by the prospect of a mission to send an astronaut to an asteroid, which he refers to as a “Mickey Mouse rock”.