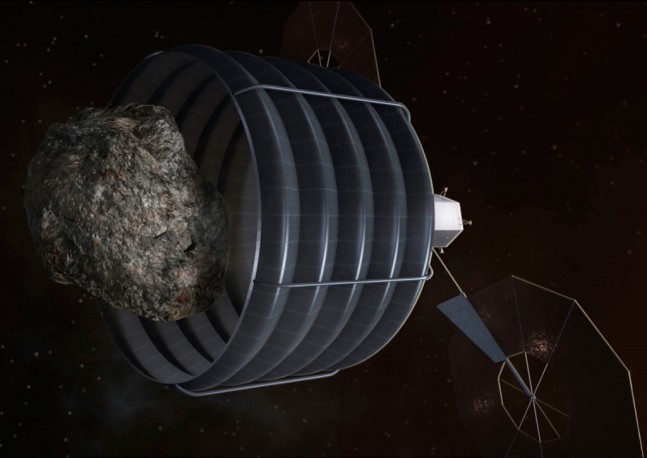 NASA has announced that it will go with "Option B" in terms of the space agency's Asteroid Redirect Mission. Image Credit: NASA

NASA has announced that it has selected “Option B” for its Asteroid Redirect Mission (more commonly referred to as ARM), meaning that rather than towing an entire asteroid into lunar orbit, it will instead retrieve a boulder from an asteroid and bring it into a distant retrograde lunar orbit. Using Solar Electric Propulsion (SEP), an uncrewed spacecraft will retrieve a boulder from a yet-to-be-determined asteroid and tow it into lunar orbit, where it will be visited by astronauts on a future Orion / SLS mission.

NASA Associate Administrator Robert Lightfoot said that Option B offers more choices for what object the ARM spacecraft will retrieve.

“The Asteroid Redirect Mission will provide an initial demonstration of several spaceflight capabilities we will need to send astronauts deeper into space, and eventually, to Mars,” Lightfoot said. “The option to retrieve a boulder from an asteroid will have a direct impact on planning for future human missions to deep space and begin a new era of spaceflight.” Astronauts will launch to the asteroid fragment in an Orion spacecraft launched by the Space Launch System (SLS). Image Credit: NASA

Option B is estimated at costing $100 million more than Option A, but Lightfoot points out that, excluding the launch vehicle, Option B is still less than $1.25 million for the robotic part of ARM.

So far, NASA has not yet selected an asteroid, but contenders include Itokawa, Bennu, and 2008 EV5. There should be one or two additional candidates each year. Before selecting an asteroid, scientists will have to determine its size, shape, rotation, and precise orbit.

The ARM robotic spacecraft’s Solar Electric Propulsion (SEP) system, which collects sunlight through solar arrays and converts it to electricity, will be slower than a conventional rocket, but cheaper and require fewer launches.

After rendezvous with the asteroid, the spacecraft will deploy robotic arms to capture a boulder up to four meters in diameter. Before towing it to Earth, NASA will test techniques to deflect an asteroid should one be detected on collision course with Earth. By putting itself in a halo orbit, the spacecraft will test the gravity tractor technique, in which the mutual gravitational attraction between spacecraft and asteroid would nudge the asteroid off its course. It will take six years for the ARM spacecraft to tow the boulder into lunar orbit. Some time later, a crewed mission will visit the boulder in an Orion Multipurpose Crew Vehicle launched by the 70 metric ton version of the Space Launch System (SLS). That launch will take place sometime after Exploration Mission 2 (EM-2), the first crewed flight of Orion, currently planned to take place sometime in 2021. Astronauts would then collect samples from the boulder for return to Earth.

In addition to retrieving asteroidal samples, the crewed mission will test the procedures required for a mission to Mars, including the docking mechanism that will connect the Orion with the robotic spacecraft carrying the boulder. The astronauts will conduct extravehicular activity using new space suits designed for use in deep space, and the retrieval of samples will provide data on how best to collect samples from Mars. The material from the asteroid might provide information to scientific research firms or corporations that might be interested in asteroid mining in the future.