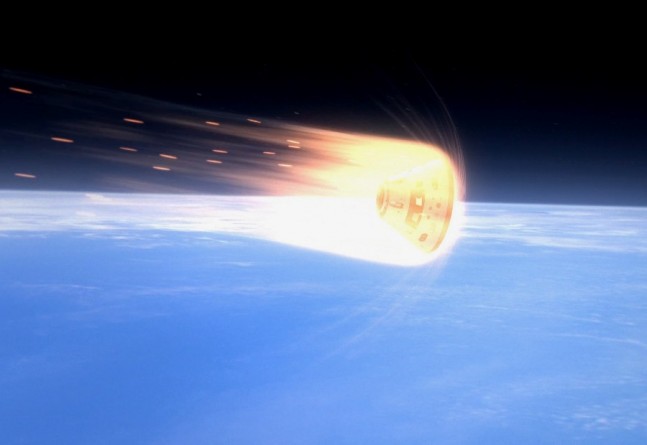 CAPE CANAVERAL, Fl — Upon completing its two-orbit voyage into space, NASA’s new crew-rated spacecraft, Orion, returned home at speeds reaching some 20,000 miles (32,187 kilometers) an hour. What would an astronaut see from his or her position seated within the capsule-shaped spacecraft? NASA placed a camera inside the Orion that carried out the Dec. 5 Exploration Flight Test 1 (EFT-1) mission – and the footage it provided – helped answer that very question. What the camera witnessed – was astonishing – and spoke to the fantastic stresses and temperatures that the spacecraft encountered as it made its way through Earth’s thick atmosphere.

The recorder that captured this video was actually one of the first elements to be removed and reviewed after it conducted its voyage through Earth’s atmosphere. The video recorder was positioned so it was looking out one of Orion’s windows. NASA showed what video it could during the descent directly on NASA TV. However, as the temperatures surrounding the spacecraft reached 4,000 degrees Fahrenheit – the superheated plasma prevented the reception of the video signal.

According to NASA, the video below begins about 10 minutes prior to Orion’s 11:29 a.m. EST splashdown off the Coast of California. When all was said and done, Orion deployed some 11 parachutes after its forward bay cover was jettisoned – slowing Orion to a speed of about 20 miles (32 kilometers) per hour. Orion’s heat shield and exterior – bore clear signs of the fiery reentry it endured when it was placed on display on Dec. 19. Photo Credit: Mike Howard / SpaceFlight Insider

The video shows how friction builds up, generating incredible temperatures which caused the increasingly dense air surrounding the spacecraft to change colors, from white, to yellow and then a light red. The heat, will be kept away from crews that will fly on Orion by a process known as ablation – where the material that comprises the vessel’s heat shield burns away – and takes the heat with it.

Shortly after splashing down, a combined U.S. Navy, Air Force and NASA team retrieved Orion and guided the seared craft into the USS Anchorage – where it was then brought back to land. It then was trucked back across the continental United States, arriving at NASA’s Kennedy Space Center on Dec. 18.

What is the story with the soundtrack?

I very much enjoyed your video and particularly enjoyed the music. What is it from? It almost sounds like Vangelis?

Very cool! Great work guys! When do I get a ride? 🙂

It is good to know that there is spontaneous naturally occurring music that plays as you enter the upper atmosphere. That way if you burn up, it is much more dramatic and cinematic.

Is the purple stuff atomic oxygen? I remember seeing a demo of a heat shield tile in which they claimed it was so hot the gases weren’t in molecular form any more.

Also if I was riding in that thing the music would really freak me out.

The only thing cooler than what I just saw which was really cool (and took me back to the Apollo missions and the first moon walk) would be to have GoPro cameras mounted on the underside of the parachutes showing the space capsule floating down through the clouds and splashing down- now that would be a first!

I echo Jeremiah’s comments. My 2 year old daughter was convinced that the parachutes were jellyfish!:-) Also, the video and music compliment each other perfectly. The music reminds me of Brian Eno’s “Apollo: Atmospheres and Soundtracks”, which was also used in the National Geographic documentary ” For All Mankind “.

why the pacific..and not the atlantic? Bigger target

Bigger target and perhaps the Earth’s rotation had something to do with it?