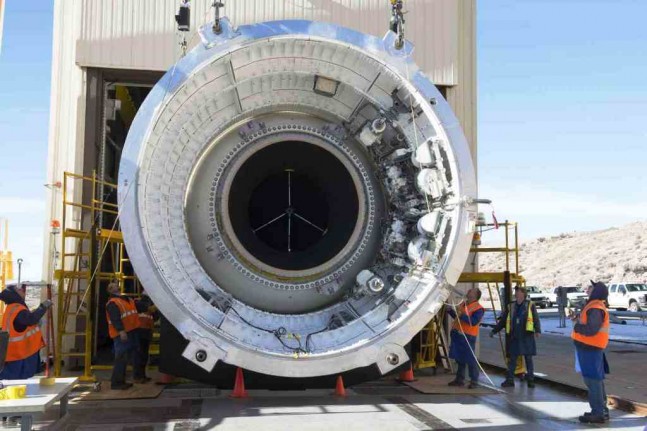 PROMONTORY, Utah — Everything is “GO” for a planned static test-firing of a five-segment solid rocket booster (SRB) in the mountainous terrain of Utah. On March 11, NASA and Orbital ATK are planning on unsheathing “the most powerful” SRB from the support structure that currently surrounds it for the test – and then to activate the rocket to see how it performs. If everything goes according to plan, it could mark the latest step in the space agency’s efforts to return to the business of sending crews to locations such as an asteroid – and possibly to Mars.

Dubbed the “Qualification Motor 1”, or “QM-1”, the test will take place at Orbital ATK’s T-97 test stand located at Promontory, Utah, on March 11 at 9:30 a.m. MDT (15:30 GMT). An estimated 102 objectives, measured on more than 531 instrumentation channels, have been laid out in front of the engineers who will be at the “hot motor” test. The booster will be pre-heated to a temperature of some 90 °F (32 °C) prior to activation so as to determine how the booster behaves at a high temperature. The test will also work to ensure that the motor meets ballistic requirements.

Whereas some reports have production on the QM-1 beginning late last month, in actuality, preparations stretch back all the way to 2012 with original plans to conduct the test in 2014. However, a void was discovered in the solid fuel that powers each of the SRBs and Orbital ATK (at the time ATK) had opted to conduct a thorough review of the problem. To date, three test firings have been conducted for use on the former Ares V and current SLS launch systems. Photo Credit: NASA

“We thought we had an understanding as to why these voids were forming, but we wanted to take a closer look at them to gain a better understanding of the situation,” said Orbital ATK’s Kent Rominger during a Dec. 13, 2014, exclusive SpaceFlight Insider interview.

Orbital ATK’s engineers will monitor the test to gain additional insights into upgrades that have been made to the new insulation and propellant liner, as well as a redesigned nozzle which is being used on the booster. Once fired, the SRB used on the QM-1, which is placed in the horizontal position during the test, will unleash an estimated 3.6 million pounds-force (22 million horsepower; 16 MN) at maximum thrust.

If the design of the motor seems familiar, it is due to the fact that a four-segment version of the rocket were used during the space shuttles’ 30 years of service. Two of these motors powered crews aloft on 133 successful flights. Some have questioned the need to carry out this and similar tests due to the shuttles’ history. Whenever any change is made to any system on which crew will eventually fly – extensive tests are carried out. These include modifications to the launch vehicle, the spacecraft, as well as ground support systems. The QM-1 test had been slated to take place last year. However, after voids were discovered in the motor’s fuel, ATK opted to delay the test out of an abundance of caution. Photo Credit: Orbital ATK / NASA

“The fifth segment makes the booster about 25 percent larger, so you have higher thrust. But, the specific impulse that matters is the amount of energy that you get out of that booster. When you start looking at putting large amounts of mass to space – that energy becomes very important,” Rominger said.

In 2004, it was announced that NASA would retire the shuttle upon the completion of construction of the International Space Station. The agency would now work to produce so-called “legacy” systems which would be used to enable a new era of space exploration.

As budgetary and management issues, in what had come to be called the Constellation Program, and political winds in Washington D.C. had changed, what emerged was a new approach to space exploration – with a new launch vehicle at its core.

The five segment SLS booster is longer and has a new liner, avionics and other systems not found on the shuttle SRB that it is derived from. Photo Credit: Orbital ATK / NASA

NASA’s new heavy-lift booster – the Space Launch System or “SLS” – emerged from Constellation’s ashes through a determination by the U.S. Congress to not lose the (more than) $9 billion and 7 years already invested in the program when President Obama decided to cancel all human deep space exploration efforts in the 2009-2010 timeframe.

NASA hopes to conduct the first flight of SLS, capped by the space agency’s new crew-rated spacecraft, in 2018. This mission, named “Exploration Mission 1” or “EM-1”, will see Orion take an uncrewed circumlunar flight. This flight will utilize the 77-ton (70-metric-ton) version of SLS. The agency is planning on continually evolving the design which should see the booster have the capacity of hefting as much as 130 metric tons into low-Earth orbit (LEO).

If the test goes as advertised, Orbital ATK will not have time to rest on its laurels. A second test, QM-2, is planned for 2016. This one will validate the design for initial flights on SLS. In autumn 2016, the booster will face another critical milestone on the road to flight – a Critical Design Review. Wednesday’s static test fire will see the QM-1 SRB conduct a full-duration burn and mark the first time that Orbital ATK, a merger between Orbital Sciences Corporation and ATK, have carried out such an enterprise since the duo officially merged on Feb. 9, 2015.

“It is exciting to see that the teams working on SLS and the Orion crew capsule are all making steady progress toward NASA achieving a human mission to Mars by the 2030s,” Precourt said.

SpaceFlight Insider will provide live coverage during the test flight, which will include the direct feed from NASA TV. Please tune into our hour-long broadcast as we give you exclusive insights and interviews – offered no where else! To follow on Twitter: @SpaceFlightIns, #SLSFiredUp #SLS #Boosters #NASA

Hey, no negative intentions here just wanted to point out that this sentence,

““We thought we had an understanding as to why these voids were forming, but we wanted to take a closer look at them to gain a better understanding of the situation,” said Orbital ATK’s Kent Rominger during a Dec. 3, 2015, exclusive SpaceFlight Insider interview.”

I just wanted to point it out to you guys, it’s a TINY error, but can make for a confusing article.

Hi Micah,
Thanks so much! We never pretend to be perfect – and deeply appreciate it when someone lets us know how we can improve our content!
Sincerely and with kind regards, Jason Rhian – Editor, SpaceFlight Insider