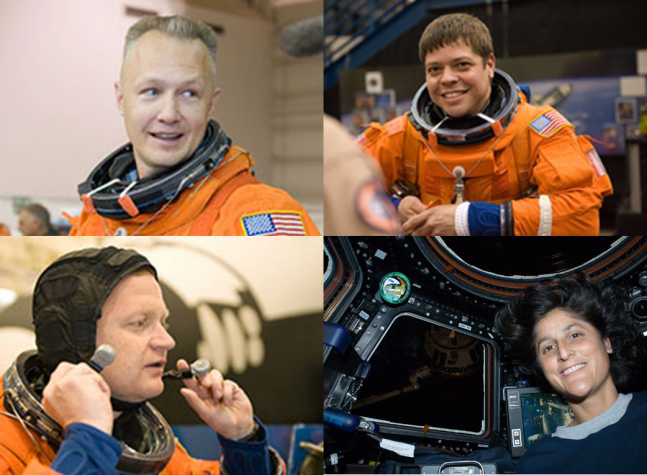 Clockwise from top left: Doug Hurley, Robert Behnken, Sunita Williams, and Eric Boe. These four NASA astronauts have been tapped to be the first astronauts to fly on commercially-produced spacecraft. Photo Credit: NASA

With the 46th anniversary of humanity’s first steps on the surface of the Moon 11 days away, NASA has announced the names of the astronauts that could be the first to fly into space aboard commercially-produced spacecraft. The quartet will now prepare to do something NASA has lacked the capability to do since the end of the Shuttle Program in 2011 – fly to low-Earth orbit (LEO).

Each of the four astronauts selected has already traveled to orbit at least once. They include Robert Behnken, Eric Boe, Douglas Hurley, and Sunita Williams. Each will work with Boeing and SpaceX, the two companies producing private spacecraft to travel to and from the International Space Station (ISS ).

SpaceX is currently working to prepare a crewed version of their Dragon spacecraft while Boeing is developing its Commercial Space Transportation (CST-100) capsule. It is hoped that these two vehicles will be ready to fly by 2017.

For the Space Agency’s part, representatives within the agency and its commercial partners have expressed optimism for the progress that has been made to date to cede the responsibility of sending astronauts to the ISS to private firms. NASA will need to transport a second International Docking Adapter to the ISS after the June 28 loss of the first IDA send to the orbiting laboratory. Photo Credit: Jared Haworth / SpaceFlight Insider

“I am pleased to announce four American space pioneers have been selected to be the first astronauts to train to fly to space on commercial crew vehicles, all part of our ambitious plan to return space launches to U.S. soil, create good-paying American jobs and advance our goal of sending humans farther into the Solar System than ever before,” said NASA Administrator Charles Bolden. “These distinguished, veteran astronauts are blazing a new trail – a trail that will one day land them in the history books and Americans on the surface of Mars.”

A key milestone that each company must accomplish under the Commercial Crew transportation Capability is to conduct one crewed test flight with at least one NASA astronaut on board. This requirement is in place to ensure that the integrated “stack” of the spacecraft and booster can lift off, maneuver while on orbit, then dock to the space station and later splash down safely after completing its mission.

“This is a new and exciting era in the history of U.S. human spaceflight,” Brian Kelly, NASA’s director of Flight Operations at the Space Agency’s Johnson Space Center in Houston. “These four individuals, like so many at NASA and the Flight Operations Directorate, have dedicated their careers to becoming experts in the field of aeronautics and furthering human space exploration. The selection of these experienced astronauts who are eligible to fly aboard the test flights for the next generation of U.S. spacecraft to the ISS and low-Earth orbit ensures that the crews will be well-prepared and thoroughly trained for their missions.”

To be able to meet certification for NASA’s stringent standards, these companies must provide extensive training in the use of the spacecraft to the astronauts that will fly in them.

“We are excited to have such an experienced group of astronauts working with the Commercial Crew Program, Boeing, and SpaceX and ultimately flying on the companies’ flight test missions,” said Commercial Crew Program Manager Kathy Lueders. “Naming these astronauts is a key step forward and consistent with past approaches to involve the crew in the design and development of new systems.” Robert Behnken is a U.S. Air Force colonel from St. Anne, Missouri, who accumulated more than 1,300 flight hours in more than 25 different aircraft types. NASA selected Behnken as an astronaut in July 2000, and he reported for training in August 2000.

Behnken flew on space shuttle missions STS-123 in March 2008 and STS-130 in February 2010, logging more than 29 days in space, including more than 37 hours during six spacewalks.

Behnken earned bachelor’s degrees in physics and mechanical engineering from Washington University in 1992, and a master’s and a doctoral degree in mechanical engineering from the California Institute of Technology in 1993 and 1997, respectively. Behnken has served as chief of the Astronaut Office since 2012. It was announced that U.S. Navy Capt. Chris Cassidy replaced Behnken as chief of the Astronaut Office on July 8. Eric Boe, who is also a United States Air Force colonel, was born in Miami, Florida and grew up in Atlanta, Georgia. As a U.S. Air Force pilot, he flew more than 5,000 hours in more than 45 different types of aircraft before NASA selected him as an astronaut in July 2000. Douglas Hurley, a retired U.S. Marine colonel, was born in Endicott, New York, and considers Apalachin, New York, his hometown. Hurley retired from the military in 2012 after more than 24 years of service as a Naval aviator who flew more than 4,500 hours in more than 25 different types of aircraft. He also was selected as an astronaut in 2000, and spent more than 28 days in space, flying as the pilot of STS-127 in July 2009 and STS-135 in July 2011, the last flight of the Space Shuttle Program.

Hurley served in several technical assignments within the Astronaut Office including as the NASA director of operations at the Gagarin Cosmonaut Training Center in Star City, Russia. His most recent assignment was as the assistant director of New Programs for the Flight Operations Directorate at Johnson. He graduated with a Bachelor of Science in civil engineering from Tulane University in New Orleans in 1988. Sunita Williams, a U.S. Navy captain, Williams was born in Euclid, Ohio, and considers Needham, Massachusetts, to be her hometown.

Williams received her commission in the Navy in May 1987 and became a helicopter pilot, logging more than 3,000 flight hours in more than 30 different aircraft. NASA chose Williams for the astronaut program in 1998.

A veteran of two long-duration spaceflights, Williams spent a total of 322 days in space and currently holds the record for total cumulative spacewalk time by a female astronaut (50 hours and 40 minutes). She now ranks sixth on the all-time U.S. endurance list and second all-time for a female astronaut. She graduated from the U.S. Naval Academy in 1987 with a bachelor of science in physical science and from the Florida Institute of Technology in 1995 with a Master of Science in engineering management.

“For as long as I’ve been Administrator, President Obama has made it very clear that returning the launches of American astronauts to American soil is a top priority – and he has persistently supported this initiative in his budget requests to Congress. Had we received everything he asked for, we’d be preparing to send these astronauts to space on commercial carriers as soon as this year. As it stands, we’re currently working toward launching in 2017, and today’s announcement allows our astronauts to begin training for these flights starting now,” Bolden, a four-time shuttle veteran, said.

NASA and SpaceX recently encountered a setback in terms of the NewSpace firm’s Falcon 9 v1.1’s launch vehicle. On June 28, 2015, a Falcon 9 exploded 139 seconds into flight. Preliminary reports have suggested an oxygen tank became over-pressurized and exploded. However, the Dragon spacecraft attached to the Falcon 9 appears to have survived the booster’s disintegration. Given that on May 6 of this year SpaceX demonstrated the crewed Dragon’s launch pad abort abilities, it is possible that had last month’s incident occurred on a crewed flight, the astronauts on board could have been lifted away to safety. A SpaceX Falcon 9 encountered a serious anomaly on June 28 that resulted in the loss of the rocket and the Dragon spacecraft that it carried. Photo Credit: Carleton Bailie / SpaceFlight Insider

“Our plans to return launches to American soil also make fiscal sense. It currently costs $76 million per astronaut to fly on a Russian spacecraft. On an American-owned spacecraft, the average cost will be $58 million per astronaut. What’s more, each mission will carry four crew members instead of three, along with 100 kg of materials to support the important science and research we conduct on the ISS,” Bolden said. “For these reasons, our commercial crew program is a worthy successor to the incredible 30-year run of the Space Shuttle Program. The decision that President Bush made in 2004 to retire the Space Shuttle was not an easy decision, but it was the right decision. As you’ll recall, it was the recommendation of the Columbia Accident Investigation Board, and endorsed by many people in the space community – including yours truly.”

Indeed, one of the key concepts behind the CCP is that NASA, having been responsible for handling the delivery of astronauts to LEO for more than 50 years, can now allow private entities to handle that responsibility.

“I think commercial efforts allow us to take a leap in technology that would take a government organization a little bit longer to do […] a bureaucratic organization that we are […] it would take a little while. Commercial companies are able to take advantage of technology that’s happened in the last 25 years, just with iPhones, etc., just as an example, to use that technology to make things, smarter, faster, lighter and better,” Williams told SpaceFlight Insider at the International Space Station Research and Development Conference. “Having two companies increases competition […] I think it makes people better.”

Williams went on to add that there are better ways to do things, other ways of doing things other than the way that they have been done in the past. She went on to state that the International Space Station will benefit from Commercial Crew.

While Boeing and SpaceX are the most prominent firms working on CCP, more than 350 U.S. companies – spread out across some 36 states – are also involved.

NASA hopes that with these companies, including Orbital ATK along with Lockheed Martin and Boeing, managing the delivery of crew and cargo to the ISS, they will free up NASA’s obligations to the space station while it is developing the Space Launch System super heavy-lift booster and Orion spacecraft for the purpose of sending astronauts to destinations far beyond the orbit of Earth.

Sunita Williams brings personality to the crew. I loved watching her give tours of the ISS.

Bit surprised SpaceX chose no crewmember of its own, but since NASA is its only customer for human launches it makes sense to use the Astronaut Office. Just wonder who the Boeing test pilot is?