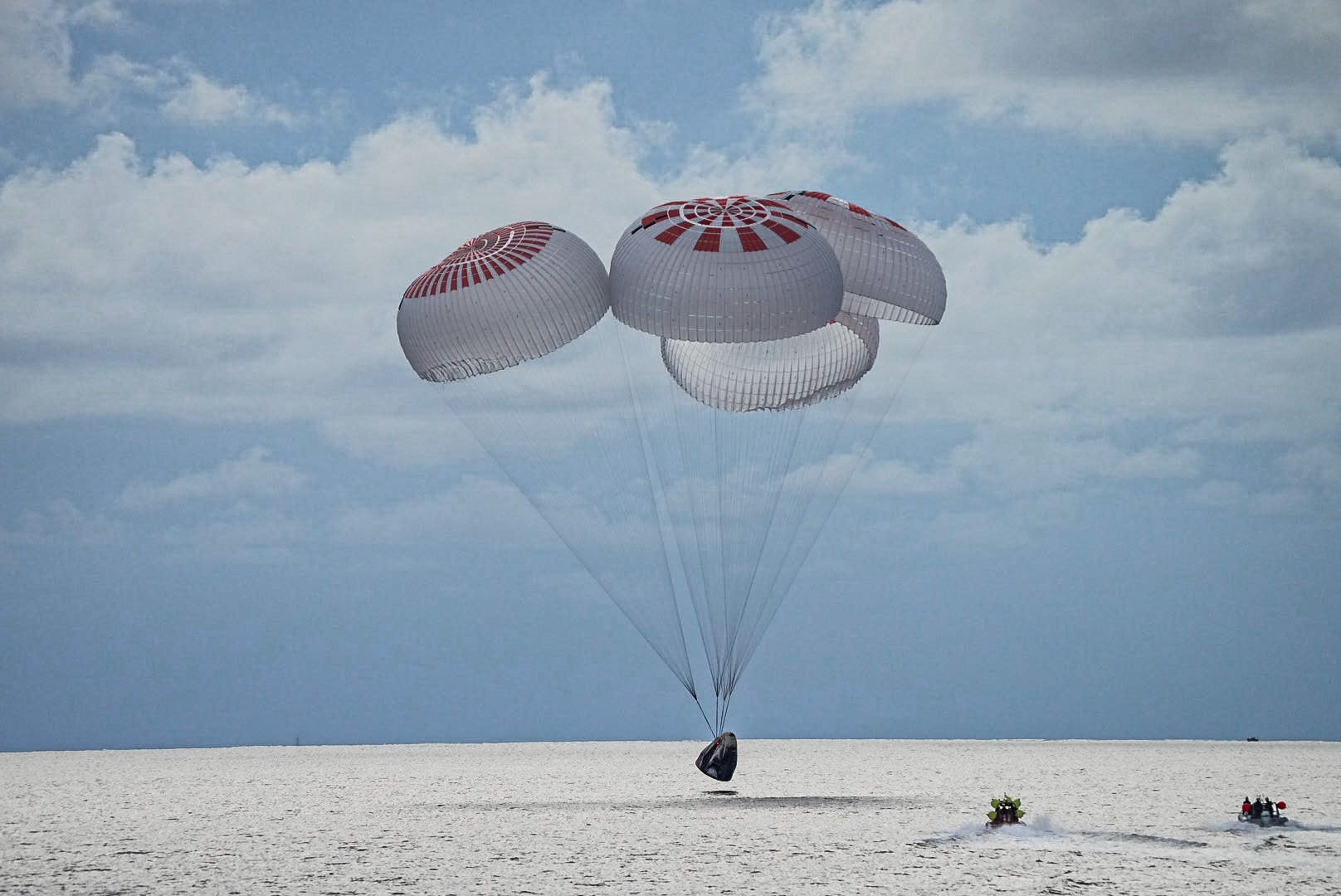 Three days after riding a rocket into space, the Inspiration4 crew return to Earth inside their Crew Dragon capsule.

This mission capped off the first all-private civilian mission into orbit and saw a number of other firsts, including the first black woman pilot of a spacecraft, the first person with a prosthetic as well as the first Crew Dragon to not fly to the International Space Station. 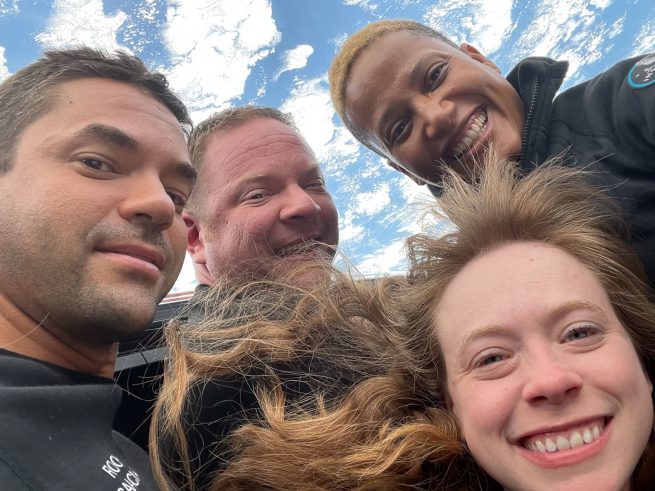 The Inspiration4 crew snap a selfie while inside the Dragon’s Cupola window. Credit: SpaceX

The mission was funded by Isaacman and primarily used as a $200 million fundraiser and outreach campaign for St. Jude.

While Isaacman served as the commander, the other three seats were given away by different methods. Arceneaux was chosen by St. Jude to represent the hospital. Sembroski was the winner of a donation-based raffle. Finally, Proctor won a Shift4 Shop entrepreneurship competition.

The four spent five months training starting in late March 2021, only two months after the mission was announced and only a month after Sembroski and Proctor were selected to join the team.

While in orbit, the four performed a number of health-related experiments as well as talked with St. Jude patients. 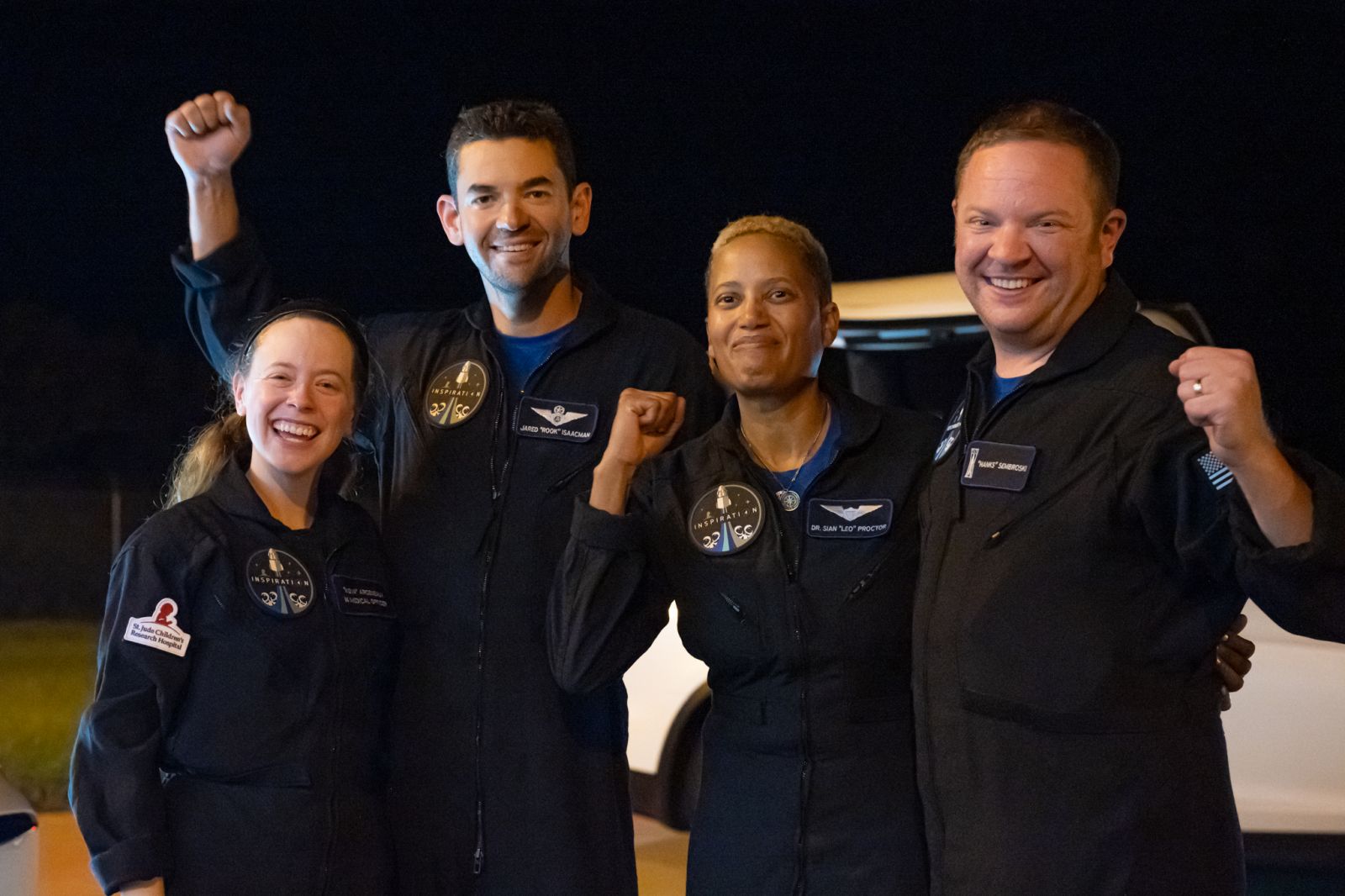 Their journey home started at 6:16 p.m. EDT (22:16 UTC) Sept. 18 when Crew Dragon performed a 15-minute deorbit burn following the separation of the spacecraft’s trunk section. A few minutes later, the nose cone closed, which protects the Cupola window during reentry.

Following entry interface a few minutes before 7 p.m. EDT (23:00 UTC), several drogue parachutes deployed to stabilize the capsule and slow it down enough to release the main parachutes. 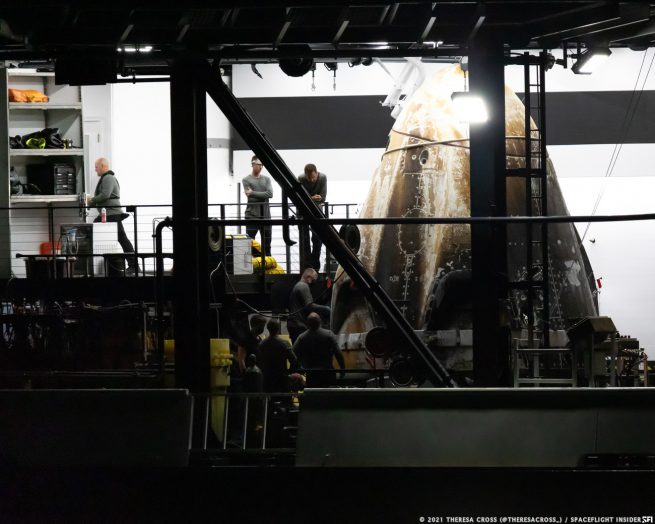 The main parachutes deployed at about 7:03 p.m. (23:03 UTC) and splashdown occurred a few minutes later in the Atlantic Ocean some 30 miles off the coast of Kennedy Space Center in Florida. In total, the Inspiration4 mission lasted 2 days, 23 hours and 3 minutes.

Over the next hour, the capsule was pulled aboard the Go Searcher recovery vessel and the crew helped out of the capsule.

After initial post-flight medical checks, and after the crew got out of their suits, they were flown back to Kennedy Space Center in Florida to be reunited with their families.

Also occurring at the conclusion of their mission was a commitment by SpaceX CEO Elon Musk to donate $50 million to the mission’s St. Jude fundraising campaign, which put the campaign over its $200 million goal.

While the crew got to take the expressway back to land, the capsule aboard Go Searcher didn’t arrive back at Port Canaveral until about 3 a.m. EDT (7:00 UTC) Sept. 19.

Some 9-10 hours later, the first stage booster that was used to help send Inspiration4 toward orbit, Falcon 9 core B1062, finally arrived at the Port — roughly just after noon ETD (16:00 UTC). 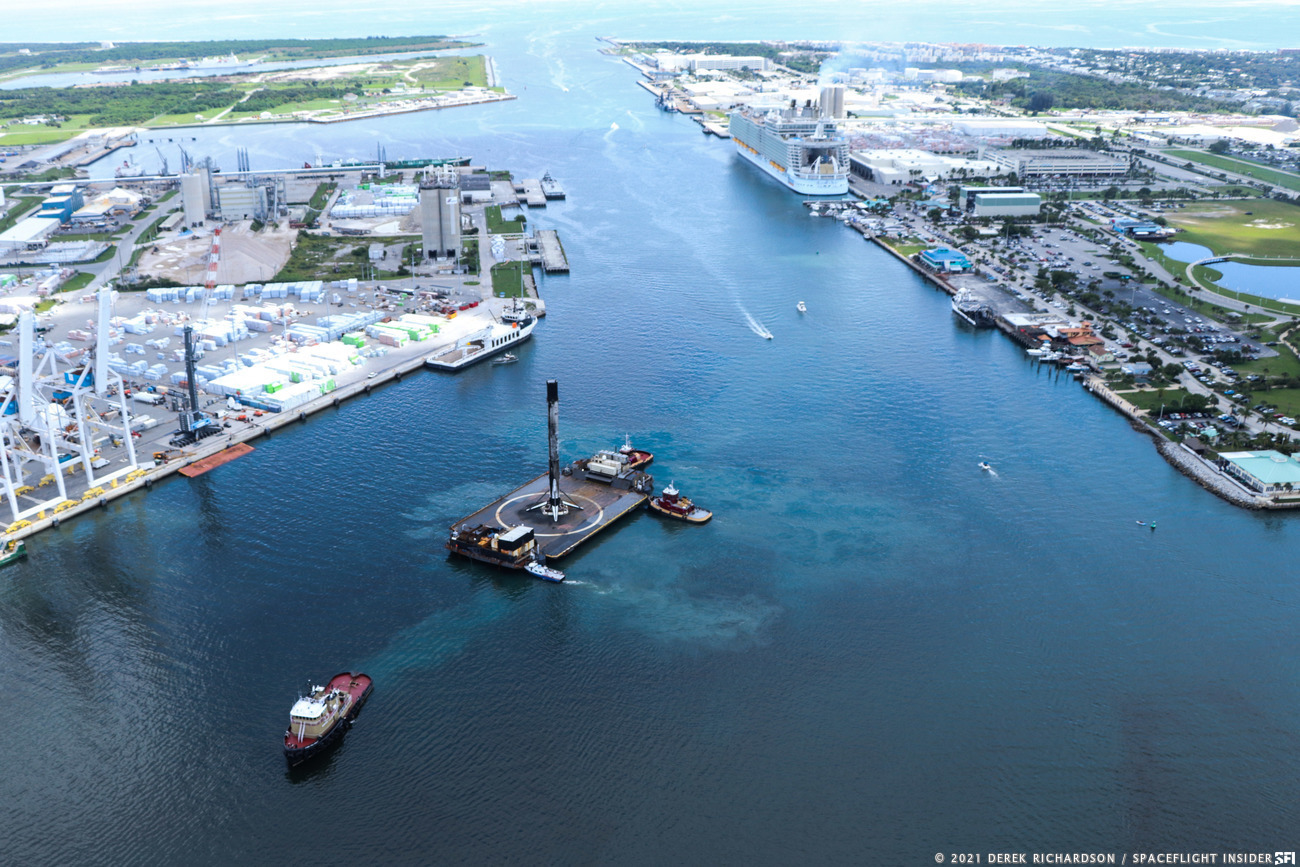 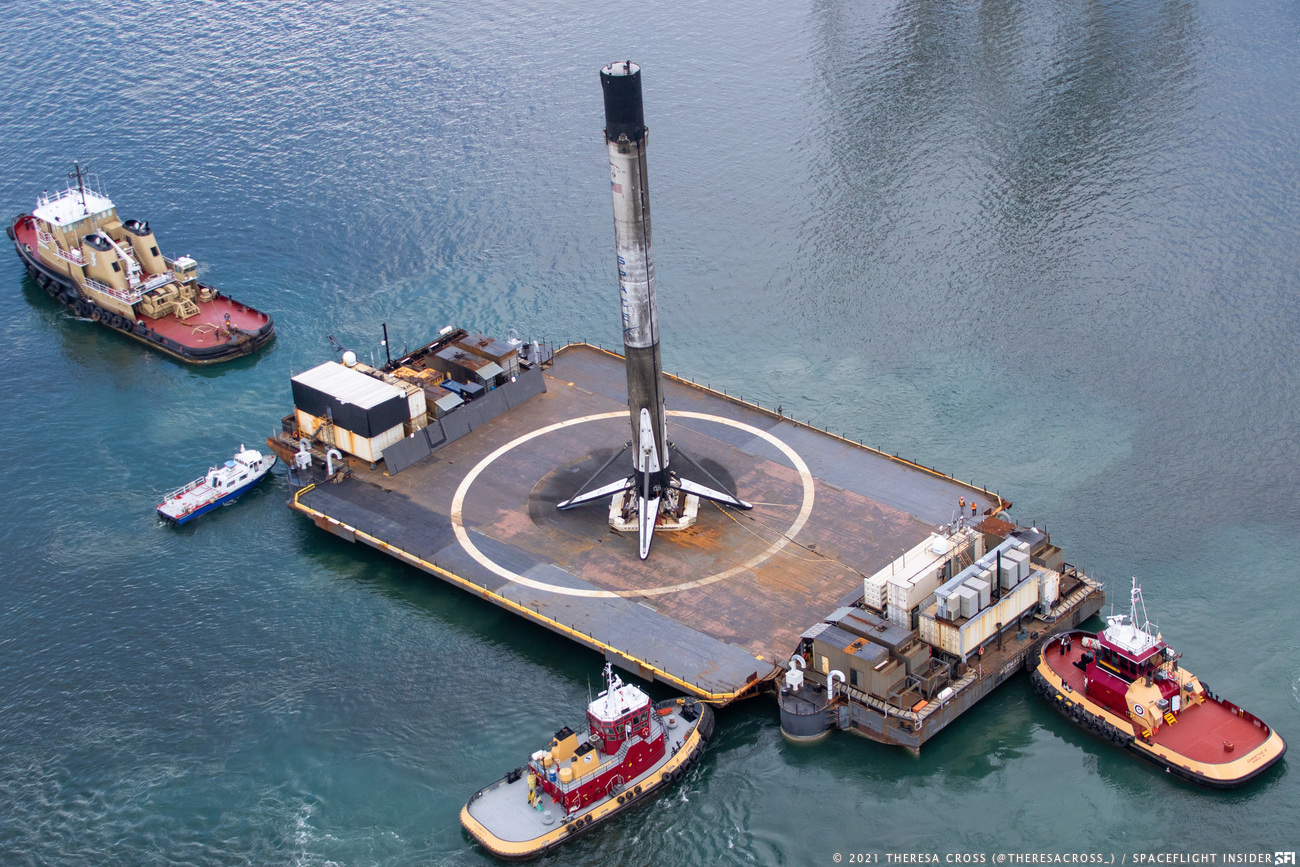 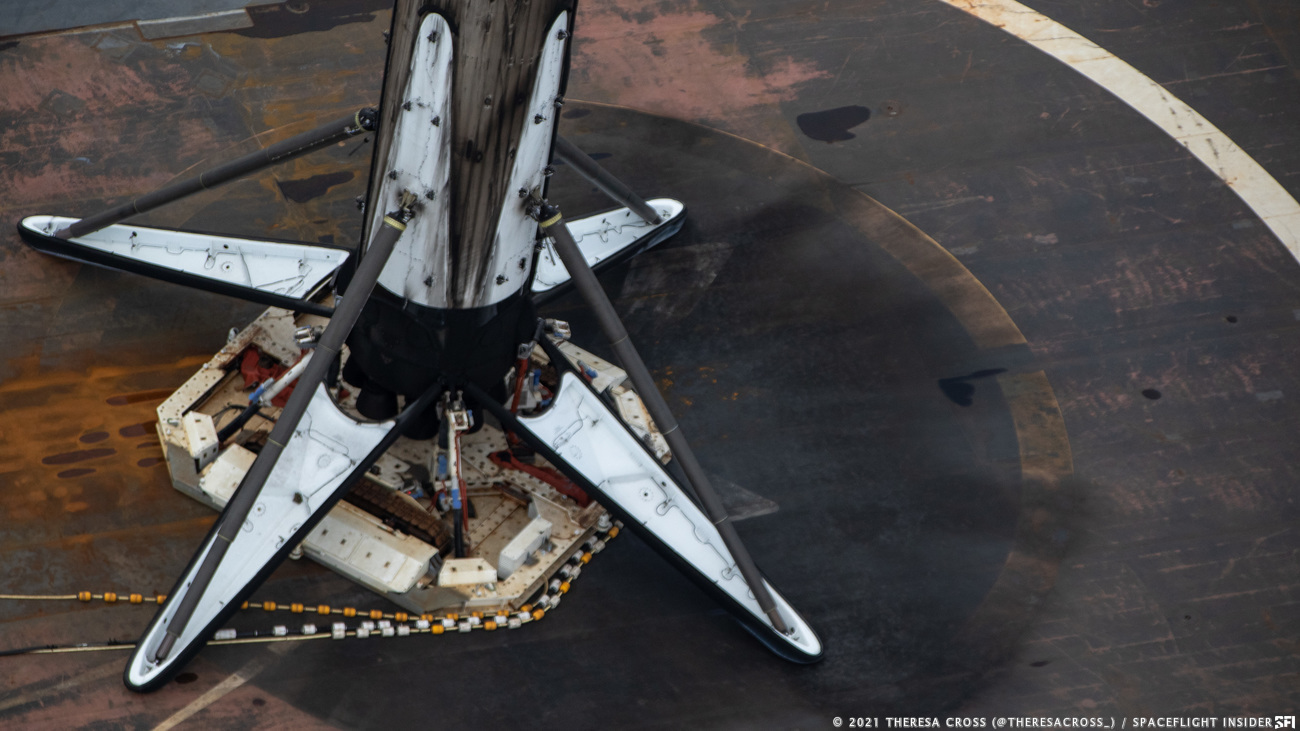 A mission that lived up to its name as well as its goals. So cool that Elon put the fundraising campaign over the top with his contribution.