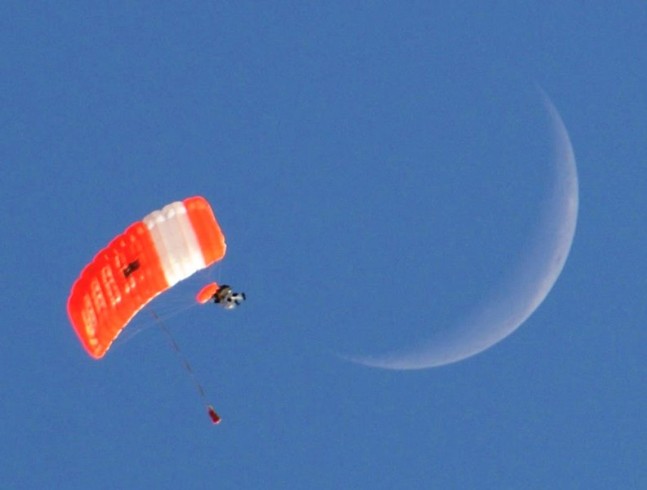 Two years ago, Austrian Felix Baumgartner broke the sound barrier when he successfully parachuted from the edge of the stratosphere. During this historic jump, he managed to break three world records –highest parachute jump, fastest freefall, and highest manned balloon ride. On Friday, Oct. 24, his records were broken – by Google executive Alan Eustace, who successfully completed a jump from more than 135,000 feet (41,148 meters). The jump took just 4.5 minutes to complete, with Eustace landing safely on the ground, approximately 70 miles (113 kilometers) from where he launched. Following his jump, the 57-year-old computer scientist now holds the national record for highest exit altitude, both the national and world records for freefall with a drogue parachute, as well as the national record for vertical speed. He is now part of a very elite fraternity, as he is only the second person to ever break the sound barrier outside of an aircraft.

Eustace lifted off  from Roswell, New Mexico, hitching a ride to the edge of the stratosphere in a helium-filled balloon and ascending at a rate of 1,600 feet (488 meters) per minute. During his 4.5 minute jump, Eustace reached speeds of more than 800 miles (1,287 kilometers) per hour, and was even responsible for a mini sonic boom when he broke the sound barrier, about a minute and a half after jumping.

What sets Eustace apart, is he did not ascend in a capsule, but relied on a specialized suit, outfitted with a life-support system, to protect him from the thin, cold upper atmosphere. The balloon, spacesuit, and support systems were all developed by Paragon and the StratEx team.

StratEx is a collaboration of ILC Dover (ILC); United Parachute Technologies (UPT); ADE Technologies Consulting, LLC (ADE); Dr. Jonathan Clark, M.D.; Julian Nott; Sreenivasan Shankarnarayan; Don Day; and World View Enterprises, Inc. The team worked to develop a specialized spacesuit that could be used in future exploration efforts of the stratosphere. The system Eustace used has varied applications that can be employed in research and even spaceship crew egress. Grant Anderson, President and CEO and co-founder of Paragon, said, “The experience and dedication of the StratEx team was crucial to the program’s success. Together, Alan and the team today extended human spaceflight to the stratosphere in an important step to solidify the safety of future human endeavors. It is an honor to work with such an incredibly talented and accomplished group. This has opened up endless possibilities for humans to explore previously seldom visited parts of our stratosphere.”

When asked about the implications of his jump, Eustace said,  “I always wondered: what if you could design a system that would allow humans to explore the stratosphere as easily and safely as they do the ocean? With the help of the world-class StratEx team, I hope we’ve encouraged others to explore this part of the world about which we still know so little.” Unlike Baumgartner, who is known for his dare-devil stunts and flashy sponsorships, Eustace prepped for his jump in secret. He worked closely with the StratEx team to develop the technologies required for his attempt. Baumgartner rose to the edge of space in a capsule, while Eustace hung below the balloon. His technology team worked to design a unique carbon-fiber attachment, which prevented him from being entangled in the parachute prior to it opening.

Eustace’s jump was not highly-televised like Baumgartner’s, and in order to film the historic jump, he carried a few GoPro cameras with him. Eustace commented that Google offered to back his jump. In an attempt to prevent it from becoming a marketing event – he declined the offer.

Eustace spent his childhood in the Central Florida area and attributes his love of space and spaceflight to watching launches from Cape Kennedy (now known as Cape Canaveral) in the 1960s and 1970s. He is a seasoned parachutist as well as an aircraft pilot.

Hi Byron,
That was my fault, not Amy’s. SFI posts all measurements in U.S. and then metrics. This information wasn’t in the original draft. I added it and in my haste – added the wrong data.
Sincerely, Jason Rhian – Editor, SpaceFlight Insider