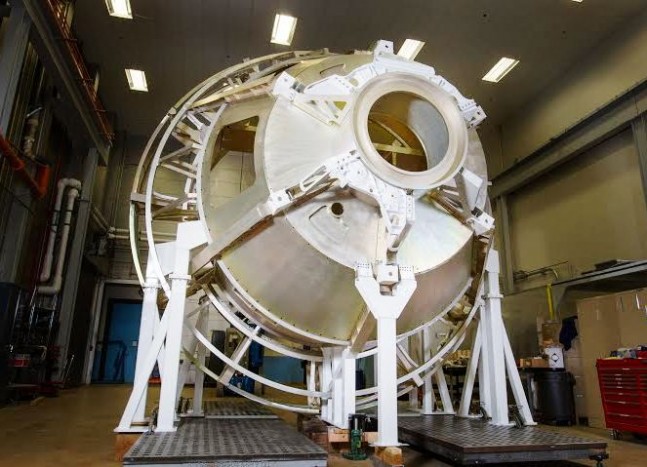 A mockup of NASA's Orion spacecraft, which will be used to prepare for the 2018 Exploration Mission 1, has finished being constructed by Lockheed Martin. Photo Credit: LMCO

In Littleton, Colorado, Lockheed Martin has completed the construction of a full-scale mockup of NASA’s new crew-rated spacecraft, Orion. This Orion crew module and adapter full-scale mockup was transferred to the Orion Test Lab (OTL ) on May 13, 2015, so that it can be used to prepare Orion for its second flight into the black on Exploration Mission 1.

EM-1 is currently scheduled to take place in November of 2018 and will be the first flight of NASA’s new super heavy-lift booster, the Space Launch System or “SLS”. This will not be Orion’s first flight, however, as the spacecraft was launched atop a United Launch Alliance Delta IV Heavy booster in December of 2014.

Once the mockup is in the OTL, it will be configured with the exact harnessing, electrical power, sensors, avionics, and flight software that will be required to support the EM-1 mission.

“Over the next day, teams in the lab will prepare the mockup for placement onto permanent support structures. We’re aiming to have the mockup ready for proof load testing by the end of the month. Once that’s complete we can install access platforms and start mounting various EM-1 components onto the mockup,” Allison Rakes, a spokesperson with Lockheed Martin told SpaceFlight Insider.

The use of the mockup should help Lockheed Martin cut down on assembly time of the actual Orion spacecraft that will be used on EM-1. It will be connected to what the company refers to as hardware emulations of the full EM-1 stack (crew module, European Service Module, second stage booster, and the Space Launch System) as well as ground support equipment.

Once the mockup has been connected, engineers will then test every part of the EM-1 flight – from liftoff to splashdown in the Pacific.

NASA hopes that SLS and Orion will open a new door in terms of deep space exploration efforts. Although some have tried to portray SLS as a rocket with no destination, the space agency has been directed to sending crews to a boulder captured from an asteroid and towed into lunar orbit in the mid 2020s, and also to the planet Mars in the 2030s. Just a thought: In the interest of economic efficiency, will the mockups be built to withstand the rigors of splashdown exercises as PRSs prepare for astronaut recovery. That worked so well with Apollo, I think it’s worth considering for Orion!