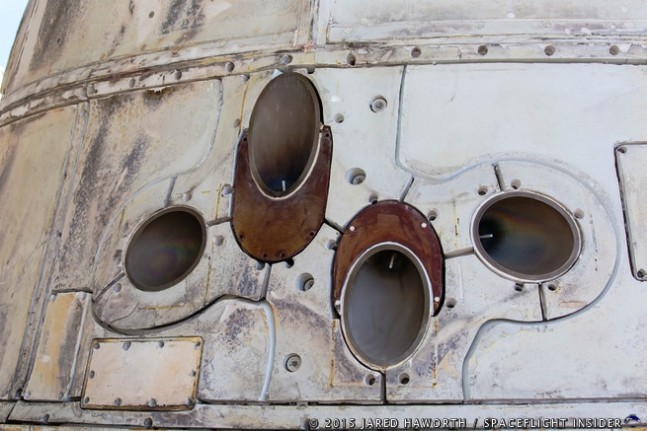 While engineers on the ground prepared a SpaceX Dragon spacecraft for launch - the Expedition 43 crew on board the station were getting ready to welcome the sixth operational Dragon mission. Photo Credit: Jared Haworth / SpaceFlight Insider

The Expedition 43 crew on board the International Space Station (ISS ) are preparing for the arrival of the sixth (operational and seventh overall) arrival of a Space Exploration Technologies’ (SpaceX ) Dragon cargo vessel. The automated craft is currently scheduled for launch Cape Canaveral Air Force Station’s Space Launch Complex 40 on Apr. 13 at 4:33 p.m. EDT. The preparations for the spacecraft’s arrival come at a time with the crew – currently consisting of two U.S. and one European astronauts, and three Russian cosmonauts – performing an array of duties on the orbiting lab.

The station’s current crew consists of NASA astronaut and commander Terry Virts along with fellow NASA space flyer Scott Kelly (who will be staying for a full year on board the station), the European Space Agency’s Samantha Cristoforetti, and Russian cosmonauts Anton Shkaplerov, Gennady Padalka and One-Year crew member Mikhail Kornienko (also serving for a year on the ISS). Virts and Kelly were kept busy on Monday, April 6, conducting spacesuit maintenance in the Quest airlock. Their fellow Expedition 43 crew members worked on an array of scientific experiments that included botany science and life research.

Over on the Russian side of the “house”, the order of the day was science and maintenance; the cosmonaut trio worked on the Kurs automated rendezvous system. This device is used to help dock Soyuz and Progress spacecraft from inside the ISS if necessary. The cosmonauts also sampled the Zvezda service module’s air and analyzed it for quality.

Meanwhile, back on Earth, mission planners and SpaceX engineers are prepping the Falcon 9 v1.1 / Dragon duo for launch. Upon reaching orbit, Dragon will spend two days on orbit catching up with the ISS. Upon reaching the station, the Expedition 43 crew will capture the automated vessel with the station’s Canadarm 2 robotic arm and berth it to the Earth-facing side of the Harmony Module. It is planned to stay at the station until May 20.

During its time connected to the ISS, the crew will remove the experiments, crew supplies and cargo – and replace them with completed experiments and waste. New experiments that are slated to travel up to the outpost include the Plant Gravity Sensing and TripleLux-A experiments. The launch is 4:33 pm EDT according to NASA’s and the 4th Space Wings web sites