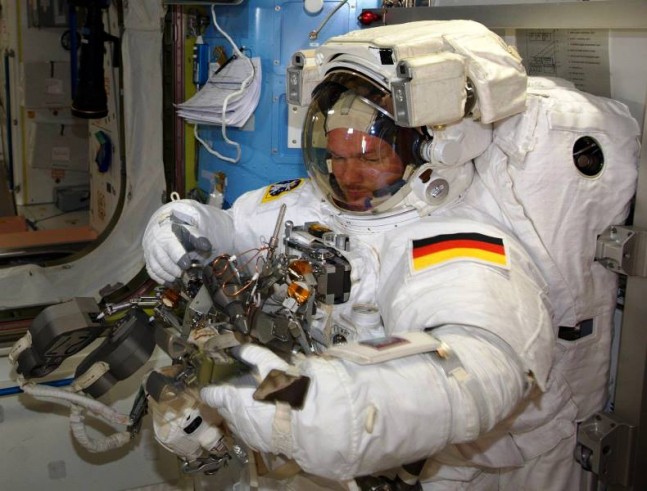 On Tuesday, Oct. 7 European Space Agency (ESA ) astronaut Alexander Gerst and NASA’s Reid Wiseman will exit the Quest airlock on the International Space Station (ISS) to spend the day outside working. They will open the airlock to exit the Station (egress in space jargon) at about 14:15 CEST and they are expected to return inside (ingress) between 19:55 and 20:40 CEST. Their main tasks are to move a water pump and install new equipment on the Station’s robotic arm.

The two spacewalkers also will install the Mobile Transporter Relay Assembly (MTRA ) that provides backup power options to the Mobile Transporter railcar system, which moves the Mobile Servicing System’s Canadarm2 and Special Purpose Dexterous Manipulator to worksites along the station’s truss. Preparing for this spacewalk the astronauts spent much of Thursday assembling hardware and reviewing procedures. “Preparing and rehearsing for a spacewalk takes weeks and involves all the partners at the Station control centers in Houston, USA and Moscow, Russia,” Gerst said.

Gerst participated in a periodic fitness evaluation as he worked out on the station’s exercise bike – the Cycle Ergometer with Vibration Isolation and Stabilization. Wilmore assisted his German crewmate by initiating blood pressure and electrocardiogram measurements to help the flight surgeons benchmark the crew’s cardiovascular and musculoskeletal health.

Flight Engineer Barry Wilmore, who will be at the controls of Canadarm2 inside the station cupola to provide support for Tuesday’s spacewalk, joined his astronaut crewmates for a review of the robotic operations.

Before exiting the Station’s Quest airlock at around 12:10 GMT (14:10 CEST), they will breathe pure oxygen for more than two hours to remove nitrogen from their bodies, much like deep-sea scuba divers do.

The two spacewalkers will work together, independently. To start, Wiseman will set up the new home for the pump while Gerst retrieves the unit from further along the Station’s truss. Wiseman will then begin their second task of installing the arm power unit, stopping at times to refasten Gerst’s tether to let him move around safely. The Canadarm2 is one of the objectives of the spacewalk. Photo Credit: NASA

“For ground control and the astronauts, spacewalks are no walk in the park,” Gerst noted. “They are tiring and require utmost concentration. From the moment you get out of the door till the time you are back in the airlock, everybody is under a very tight schedule.”

To make the most use of their time outside, the astronauts have a ‘get-ahead’ checklist. If time and energy allows, they will start on jobs planned for future spacewalks such as rerouting cables and reconfiguring equipment.

Live coverage of their spacewalk begins at 13:00 CEST via NASA TV.

Wilmore will be joining Wiseman on the second Expedition 41 spacewalk set for Oct. 15, to replace a voltage regulator that failed back in May. And on Oct. 22, Commander Max Suraev and Flight Engineer Alexander Samokutyaev will conduct the first Russian spacewalk of Expedition 41.

This article originally appeared on Astro Watch and can be viewed here: Spacewalk