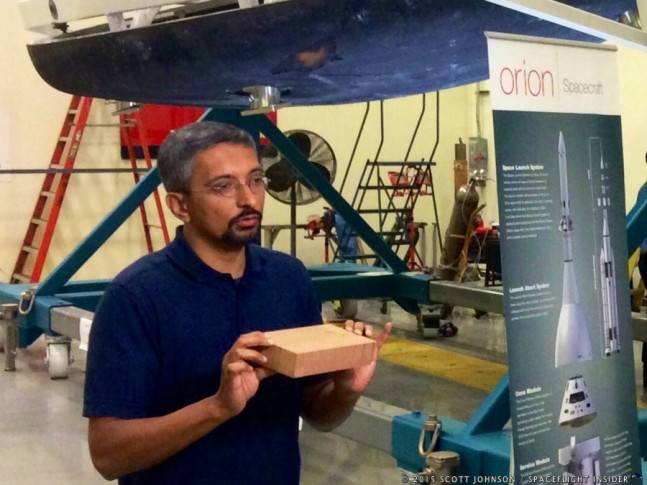 HUNTSVILLE, Ala. — SpaceFlight Insider recently reported on the transport of the EFT-1 Orion heat shield to NASA’s Marshall Space Flight Center (MSFC) for additional inspection, analysis and testing. This past week we had the opportunity to be on-site, at MSFC Building 4705, to take a last look at the heat shield, prior to the post-inspection removal of most (leaving only 1/8 inch) of its Avcoat ablative material. The heat shield is currently held in a large, rotatable, support fixture, where it’s undergone, among other things, laser scanning / mapping, to determine how well it performed during its Dec. 5 test flight. It will soon be transferred, just a few feet, to the world’s largest 7-Axis Milling Machine.

“Marshall was asked to aid in this effort because of our experience in dealing with large structures and fixtures that can accommodate a 13-foot in diameter heat shield,” said Larry Gagliano, MSFC’s deputy project manager for the Orion Launch Abort System. “The support fixture can rotate in a vertical or horizontal position to allow for core sample removal and close up imaging of the heat shield.”

The heat shield experienced temperatures of up to 4000 °F (2200 °C) when it slammed into the atmosphere at 20,000 mph (32,200 km/h) during its test flight. It’s composed, primarily, of a fiberglass-phenolic honeycomb structure, with 320,000 individual cells, filled, by hand, with Avcoat, a material designed to ablate, or gradually burn away, during re-entry to dissipate the friction-caused heat. Approximately 200 predetermined, rectangular-shaped, sample areas will be maintained and later removed, intact, for further study and testing, and the remaining Avcoat will be milled off and left in a pile of shavings on the building floor.

According to Matt Pruitt, NASA MSFC manufacturing engineer, the agency decided to use the MSFC Building 4705 7-Axis Milling Machine to remove the ablative material not because it’s the quickest way, but because “it’s the most exact way. You could come at it with an ice pick, but then you may harm what’s underneath.”

After milling is complete, the titanium / graphite heat shield “skeleton,” with residual Avcoat, will be transported to NASA’s Langley Research Center, in Hampton, VA, incorporated into a mockup of the Orion capsule, and used in a series of water impact drop-tests from Langley’s “swing-tower.” It’s somewhat appropriate that MSFC Building 4705 would play a role in NASA’s latest human space flight program, as the building has a long, storied history, and has played a key role in many of NASA’s prior programs. It’s where some of the original Saturn rockets were assembled, and a portion of the building still houses the Neutral Buoyancy Simulator (NBS), used from 1968 through 1997 to train astronauts for SkyLab, Shuttle, Hubble Space Telescope (HST), and International Space Station (ISS) missions. The NBS is now decommissioned and listed as a National Historic Landmark. It served as a precursor to Houston’s Neutral Buoyancy Laboratory (NBL) where most astronaut training now takes place.

The 7-Axis Milling Machine was originally installed in the north end of Building 4705, in 2009, for use in the now-canceled Constellation program. It was to be used, primarily, to machine common bulkhead domes for the Ares I upper stage. More recently, in 2013-14, the milling machine was used in the fabrication of the stage adapter (both the structural test article and the flight version) used to connect the United Launch Alliance (ULA) Delta IV Heavy launch vehicle to the Orion capsule (via a simulated service module) for the EFT-1 test flight.

It’s anticipated that a similar stage adapter, manufactured in Building 4705, will be used by the agency on the first Space Launch System (SLS) flight, Exploration Mission 1 (EM-1), currently scheduled for an un-crewed Orion flight around the Moon in late 2018.

It’s currently unclear as to whether Building 4705, or its 7-Axis Milling Machine, will be utilized for post-flight testing, analysis, or ablative material removal on future Orion heat shields.