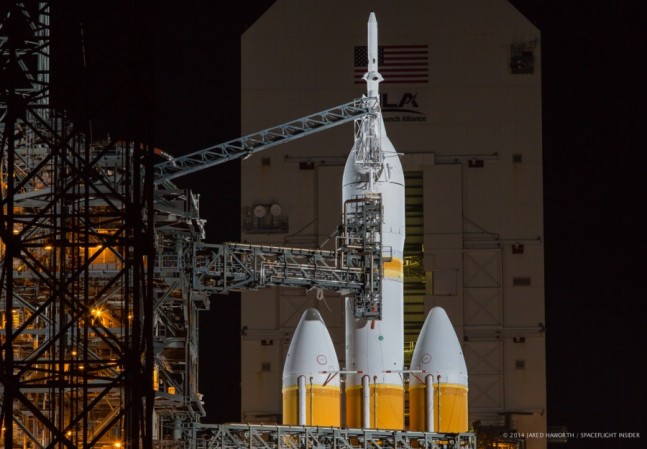 The long-anticipated Exploration Flight Test 1 (EFT-1 ) for the Orion Multi-Purpose Crew Vehicle, which was slated to launch at 7:05 a.m. EST (1205 GMT) on Dec. 4, was scrubbed near the end of the launch window after several aborted attempts.

Initially the weather was favorable and all looked well for the sunrise launch. However, due to a boat in the restricted area, the launch was delayed during the built-in hold until the boat was moved. Though the boat was cleared relatively quickly, there was also an issue with second stage propellant conditioning.

With these issues, the launch was delayed until 7:17 a.m. EST. That launch attempt made it to the terminal count, yet with approximately three minutes remaining a hold was called due to a ground wind violation.

The next attempt was set for 7:55 a.m. EST, and again, during the terminal count the attempt was aborted due to ground wind violation. High-speed wind gusts can trigger the automated alarm and cause a launch to be held in the last moments. One more attempt was set for 8:26 a.m. EST, and it too was aborted during the terminal count. This time the cause was an issue with the fuel drain valves on the Common Booster Cores. According to Dan Collins of United Launch Alliance (ULA ), the hydrogen valves “had gotten cold and a little sluggish in their performance” based on the last time a similar issue arose. At the time of the NASA press conference on the scrub, the data had not yet been fully assessed to definitely determine the root cause.

A final launch attempt for the day was declared for 9:44 a.m., the end of the two-hour-and-39-minute launch window. Troubleshooting on the valves was attempted, and NASA officials had the automated wind alarm disabled to avoid more delays due to wind gusts, but in the end a scrub was called.

The next attempt for launch of EFT-1 is currently planned for Friday, Dec. 5, at 7:05 a.m. EST (1205 GMT), though this could change. The weather forecast is somewhat less favorable for that time. Collins stated in the NASA press briefing that a Delta IV Heavy can attempt a launch two out of three consecutive days, as it will then need to have the ground tanks refilled.

If attempts are made on Friday and another scrub is called, they will have to stand down on Saturday and schedule the launch for a different day. If it is not safe to proceed on Friday, they will wait until Saturday for the next attempt. For its part, NASA lauded the efforts to get Orion into the clear blue skies, with NASA commentator Michael Curie referring to them as: “Valiant.” The cryo-valve problem has been experienced before on the Delta IV-H. Isn’t it about time ULA determined the root cause and fixed it instead of cycling the valves in the hope that they will fix themselves?

I’m somewhat confused by the article. Can they try again on Saturday, if Friday is scrubbed, or not? Or do they wait until a week from Saturday?

It’s an issue of the ground tanks needing to be refilled. Since they’ll be trying today, tomorrow won’t work, though they shouldn’t have to wait another week to try again if today gets scrubbed. Sunday would be the next attempt.