Perfect: EFT-1 – from liftoff to splashdown 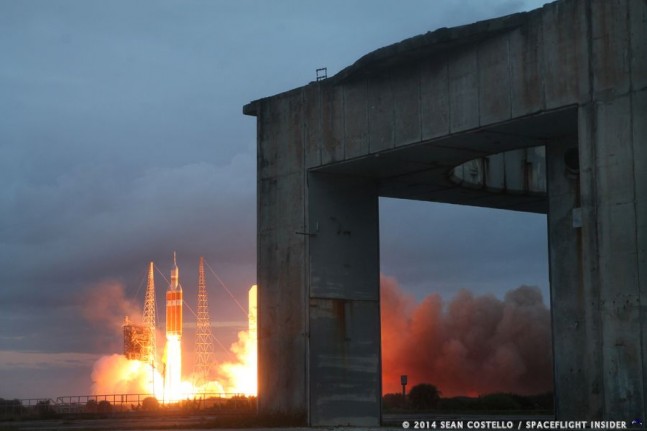 Orion, the future of manned spaceflight, lifts off in the distance as Apollo 1's Launch Complex 34 stands in the foreground. Photo Credit: Sean Costello / SpaceFlight Insider

CAPE CANAVERAL, Fla — After a disappointing first-day scrub, the long-awaited test flight of the Orion Multi-Purpose Crew Vehicle, Exploration Flight Test 1 (EFT-1), lifted off at the very opening of a two hour and thirty-nine minute launch window at 7:05 a.m. EST (1305 GMT) on Friday, Dec. 5. The launch marked the start of a perfectly-executed mission that covered 17 milestone tests for NASA’s Orion spacecraft. In the approximately four and-a-half hours following liftoff, the craft completed two elliptical orbits followed by re-entry through Earth’s atmosphere, thus stressing and collecting data about the systems necessary for successful manned flight in the future.

The design of EFT-1 was described by several outlets as mirroring the Apollo 4 mission conducted in 1967, and though that mission was used to test and prove Apollo’s flight control systems and heat shield for missions to the Moon, it was actually vastly different than the mission that took to the skies today. The purpose for the EFT-1 mission was to test “systems critical to crew safety, such as heat shield performance, separation events, avionics and software performance, attitude control and guidance, parachute deployment and recovery operations,” according to a NASA fact sheet.

However, unlike Apollo 4, the mission used an interim booster, the United Launch Alliance (ULA ) Delta IV Heavy to get it to orbit. Apollo 4, on the other hand, was an “all up” test of the various stages of the Saturn V rocket and Apollo Command and Service Module. NASA tapped the Delta IV Heavy to carry out the mission as NASA, via aerospace contractor Boeing, continues to develop and build the Agency’s new heavy-lift booster, the Space Launch System or “SLS.”

The unmanned Orion crew module was flown attached to a mock up of the service module. The full service module is slated to be tested during Exploration Mission 1 (EM-1), currently planned for 2018.

Despite early weather concerns, which materialized in the form of rain, cumulus clouds and high winds, all issues cleared in time for launch and the final go-ahead was given. At the very opening of the launch window, Orion was carried into the black shortly after sunrise at Launch Complex 37B at Cape Canaveral Air Force Station located in Florida. It was hoisted aloft atop the Heavy variant of ULA’s Delta IV booster, a vehicle capable of carrying payloads weighing as much as 50,000 lbs (22,680 kg) payload into low-Earth orbit. About five and a half minutes after the successful liftoff, the vehicle entered partial thrust mode, then experienced main engine cutoff (MECO), and finally first stage separation.

Second stage ignition commenced shortly thereafter, for the first of two burns carried out by the second stage.

Within the next minute and a half, the first two critical milestones of the flight had been achieved. The three service module fairing panels, each of which measures 13 feet by 14 feet, were successfully jettisoned.

At about six and a half minutes into the mission. Moments later, the Launch Abort System was also jettisoned. Under a normal mission the LAS would be used to pull the crew away from its launch vehicle in the event of an accident.

As this mission was uncrewed, the LAS, excluding the jettison motors which pull it away from Orion, was inert.

“We produced the jettison motor for the LAS as well as the crew module RCS engines. There are twelve 160 lb-thrust engines that we provided,” said Aerojet Rocketdyne’s Sam Wiley.

America’s newest spacecraft continued to operate nominally as it approached its first orbit around the Earth. The first cutoff of the upper stage engine, or SECO-1, occurred very close to the expected time of 17 minutes and 39 seconds into flight.

About 15 minutes later the vehicle began what is known as a “barbecue roll,” also called passive thermal control. Like meat on a barbecue spit, the slow and constant roll ensures that no systems are overheated due to uneven Sun exposure. The Apollo program employed the same strategy for that same purpose. At 9:00 a.m. EST, one hour and 55 minutes into the flight, the first orbit was successfully completed and the second stage engine reignited for a four-and-a-half-minute burn. The SECO-2, or the second cutoff of the upper stage engine, occurred at just about two hours into the flight of Orion. A second barbecue roll was also initiated.

At this point, the second orbit of the mission began. Orion climbed away from Earth into a highly-elliptical orbit that was meant to carry the craft beyond low-Earth orbit (LEO) and through the Van Allen radiation belts to test their effect on the spacecraft’s avionics. Once Orion completed its pass through the Van Allen belts and it was initially stated that Orion had passed through them with zero effects on the craft’s avionics. However, in the NASA briefing after splashdown, Lockheed Martin program manager Mike Hawes noted that one minor issue may have been a result of the radiation.

“Our video processing unit reset a couple times. We kind of expected some of the avionics to go through resets,” he said.

After splashdown, the battery-operated independent radiation detector (BIRD) will be collected and the data will then be evaluated to determine if extra shielding will be necessary to protect the astronauts and instruments from such radiation. The data will also be examined to determine exactly how much of an effect the radiation actually had during this flight. At 10:11 a.m. EST (1511 GMT), the spacecraft reached its apogee, or the highest point in its orbit, of what was calculated to be 3,604.2 statute miles above the Earth. For context, that’s “more than 15 times farther than the International Space Station’s orbital position,” according to another NASA fact sheet.

It’s the furthest from Earth that a human-rated spacecraft has gone since the flight of Apollo 17, the final Apollo lunar landing mission – carried out in 1972. The GPS on Orion not only met, but in fact exceeded, the preflight performance predictions for it at this altitude.

In future missions, a functioning service module will be used to support the crew with power, water and air until this point in the flight. When Orion reaches this stage in the flight for crewed missions, the service module is jettisoned. At this time during EFT-1, Orion separated from its second stage, which carried out one final burn — for disposal. After this, the RCS thrusters were used to re-orient the spacecraft around 180 degrees so that the heat shield would point toward the Earth for re-entry. At the time of re-entry, a hush fell over the NASA Press Site as members of the media, NASA officials, astronauts and aerospace insiders waited to see if all was successful. Entry interface, the point at which the effects of the atmosphere are felt on the vessel, occurred at approximately 11:18 a.m. EST (1618 GMT), thus commencing the test of the world’s largest heat shield.

The thermal protection system for Orion is designed to protect the capsule and its precious cargo from the extreme temperatures that are encountered when these craft that can reach approximately 4,000 degrees Fahrenheit. An ablative material, made of fiberglass and designed to burn away during re-entry, carried the heat with it as it was seared off while the craft passed through Earth’s thick atmosphere.

The capsule made its re-entry at a speed estimated at about 20,000 miles (32,187 kg) per hour, in order to adequately test the heat shields. This test was designed to determine if the shields will be able to withstand the descent velocities’ encountered and sufficiently protect the capsule from the searing heat of re-entry. Its return velocity was about 84 percent of the expected velocity for Orion in future flights, and it was predicted to pull a maximum of 8.2 Gs this flight.

The spacecraft took about 10 minutes to pass through the atmosphere, eventually slowing to an estimated speed of about 300 miles per hour. While in Earth’s atmosphere, the forward bay cover was jettisoned according to plan, allowing the parachutes to be deployed. The two drogue parachutes unfurled successfully, receiving wild applause from those assembled at the NASA Press Site, and the three main parachutes followed just as intended, again with an enthusiastic reception. These parachutes slowed the descending spacecraft to a mere 20 miles per hour before it splashed down.

The capsule splashed down into the Pacific Ocean just off the Coast of San Diego at 11:29 a.m. EST, landing within the “bullseye” of the preflight target, in the correct position. From this area, the Orion capsule was able to be retrieved by NASA and U.S. Navy teams by way of a San Antonio-class amphibious transport dock ship called the USS Anchorage and the USNS Salvor.

Hawes also added, “When we started at (Johnson Space Center), we started with all the Apollo guys still there. So we kind of have finally done something for the first time for our generation.” Misty-eyed, he concluded, “It’s a good day.”

Congrats to NASA and their contractors for a successful Orion EFT-1 mission! The successful launch of Orion EFT-1 from SLC-37 continues the string of successful test flights of crewed spacecraft from this launch pad which, by coincidence, is the same one used a half a century ago for the first orbital test flights of Apollo hardware. Seems only fitting that we are starting to rebuild the capability we once had with Apollo from the same launch complex used originally to develop it.

At the time of re-entry, a hush fell over the NASA Press Site as members of the media waited to see if all was successful. Entry interface, or the point at which the effects of the atmosphere are felt on the vessel, occurred at about 11:18 a.m. EST (1618 GMT), 4,000 feet above the Earth, thus commencing the test of the world’s largest heat shield. The thermal protection system for the Orion is designed to save not only the capsule, but also its future human occupants, from high re-entry temperatures that can reach approximately 4,000 degrees Fahreneheit. An ablative material, made of fiberglass and designed to wear away during re-entry, carried the heat with it as it burned off while the craft passed through the atmosphere.”

You need to check on that 4000ft number. The drogue parachutes deploy at c. 22000ft. Also, Fahrenheit is misspelled.

Despite my excitement over the success of Orions’ first flight, I am still rather disappointed at the Apollo era re-entry. Dreamchaser and the Shuttle are far more elegant ways of returning from the black. As long as mankind is back on track for some great exploration, I’ll remain satisfied.

Ny 11 year old nephew asked when will people ride in it. I told him when you are 18-20 people might ride in the capsule if the program doesn’t get canceled by then.