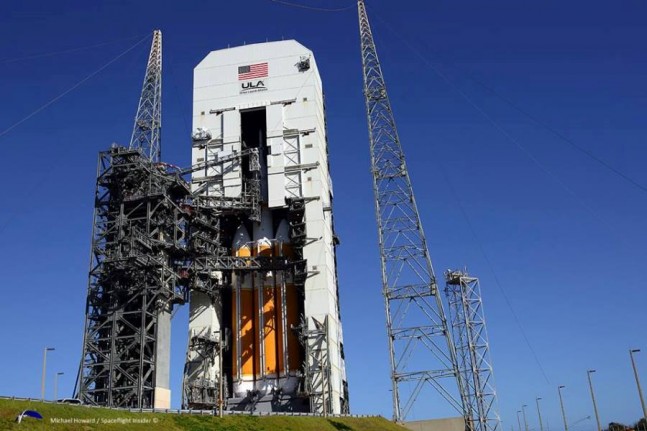 KENNEDY SPACE CENTER, Fla. – “Its a big day!” Those were NASA Administrator Charlie Bolden’s words this morning as he stood in front of the agency’s new beyond low-Earth-orbit (LEO) capsule perched atop a Delta IV Heavy launch vehicle at Space Launch Complex (SLC) 37. Orion is scheduled for launch at 7:05 a.m. EST, tomorrow, Dec. 4, on its first mission, Exploration Flight Test 1 (EFT-1).

EFT-1 will be a key test of some of Orion’s most critical systems, including avionics and an initial design of its heat shield.

Johnson Space Center’s (JSC) Director, Ellen Ochoa, was on hand and explained that: “we’re taking some of the highest risks” on this flight in an attempt to “clear” those systems early in the development process. Bolden explained that: “Orion is an evolving vehicle.” Data gained from EFT-1 will be used to prepare the capsule to take astronauts to the vicinity of the moon, to an asteroid, and, eventually, to Mars.

Kennedy Space Center’s (KSC) Director, Bob Cabana, was also on hand and echoed Bolden’s sentiments: “I’ve got to tell you, this is special.”