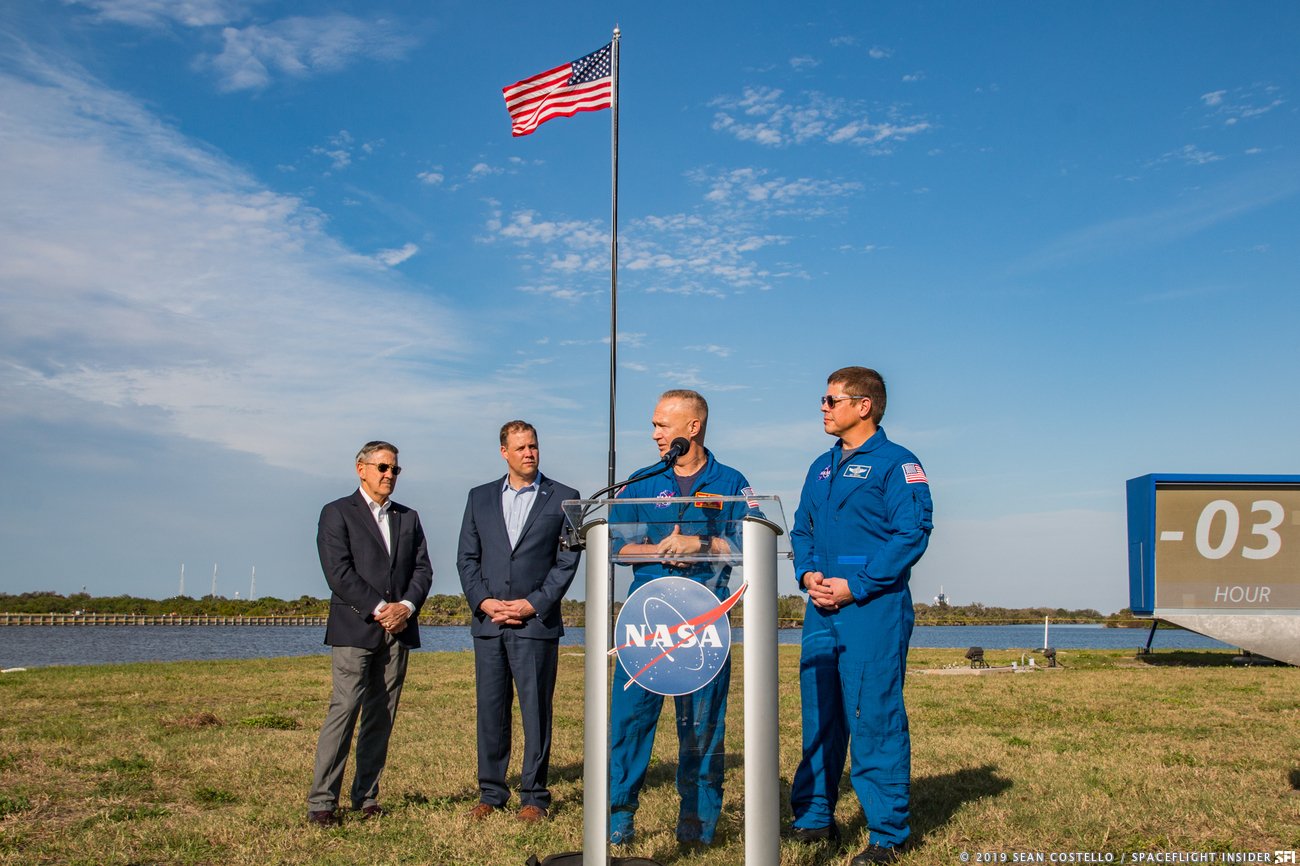 During a recent joint NASA / SpaceX Demo-2 mission press conference, a clear picture was painted as to what launch day activities and the ensuing flight of Crew Dragon will look like. In releasing and discussing visual representations of the planned flight profile, the two organizations are sharing with the public just how much planning and pre-flight readiness work has been invested by thousands of program workers ahead of the historic mission, dubbed DM-2.

An animation of NASA’s SpaceX Demo-2 mission which will carry astronauts Robert Behnken and Douglas Hurley to the International Space Station. This will be SpaceX’s final flight test for NASA’s Commercial Crew Program and its first ever flight with crew. It will be the first launch of astronauts to the space station from U.S. soil since the space shuttle’s retirement in 2011.Credit: NASA / SpaceX

Depicted below are three visual representations for what DM-2’s flight profile will follow for the mission. As depicted below, the complex flight plan all starts with a currently scheduled liftoff at 4:37 p.m. EDT, May 27, from Kennedy Space Center’s historic Launch Complex 39-A. 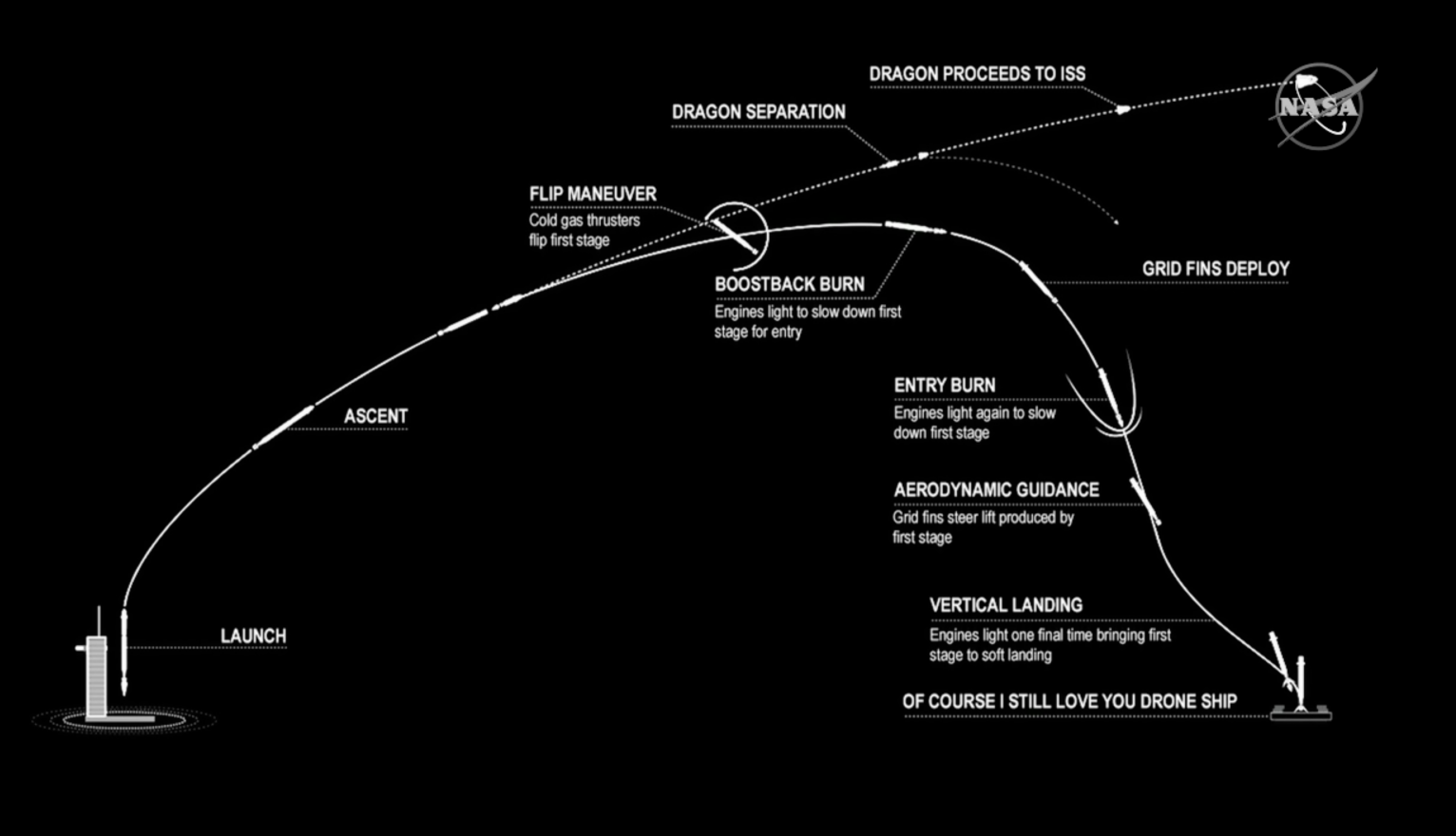 For those familiar with SpaceX’s Commercial Resupply Services (CRS) missions, the flight plan will look fairly similar to the 20 missions Dragon’s first iteration flew to the international outpost. The initial launch trajectory will situate the launch vehicle on a flight path northeast of the Kennedy Space Center. Approximately two minutes after liftoff, the second stage carrying Crew Dragon will separate from the first stage and begin its kick to low earth orbit.

As has become common following SpaceX missions launching to the International Space Station, the company will attempt to land the first stage on the autonomous drone ship “Of Course I Still Love You.” As seen above, the first stage completes a flip maneuver to orient itself for a boost back burn to propel itself back to the landing zone. Given the historical significance of this particular flight, and the custom NASA paint job featuring the retro “worm logo” on the booster, SpaceX is quite interested in recovering the first stage; this is expected to occur at approximately T+8 minutes.

Crew Dragon should shortly thereafter separate from the second stage, which puts it in its first phase of orbit to rendezvous with the ISS. This step will bring Crew Dragon and her crew, NASA astronauts Bob Behnken and Doug Hurley, to its second phase of flight – orbit activation. 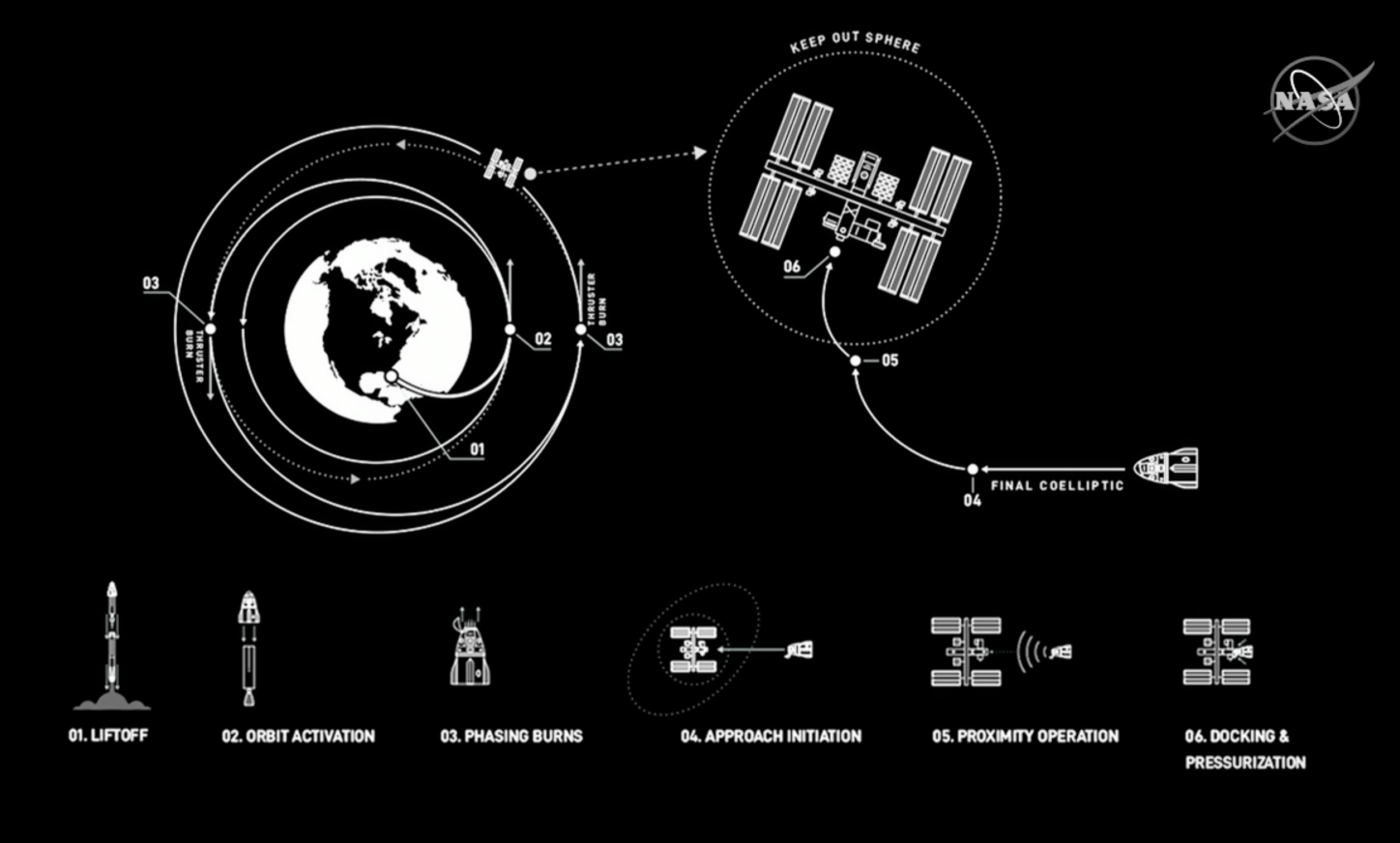 The spacecraft’s orbital path to the ISS begins during vehicle separation from the second stage as depicted by “phase 2” of the flight profile illustration. The entire process is capable of occuring autonomously, however, either crew member can step in at any time to override the onboard systems in the event of an anomaly. During “step 3,” Dragon’s Draco thrusters complete phasing burns at apogee of the orbit to raise the spacecraft to the same orbital path as the ISS. The process is gradual and takes place at apogee for each particular orbit the spacecraft aligns itself to. It is likely that there will be other “phasing steps” that happen during this time, resulting in the need for Dragon to take up to two days to reach Station. The specific details of what will be tested during, and the specific duration of, Dragon’s pre-rendezvous orbit was not available at time of publishing.

At indicated step 4, Crew Dragon is completing the final step before aligning itself with the ISS, positioning itself in a coeliptical transfer orbit. This gives Dragon a low inertial approach rate as it lines up for the final approach phase outside of the Station’s virtual ‘200 meter Keep-out sphere’. The spacecraft will approach Station very slowly using its autonomous docking system. By step 5, the Station and spacecraft will be in constant communication with each other; much like an instrument landing system (ILS) approach used by aircraft, Station will essentially be giving Dragon’s onboard computers targeting data as it approaches the station’s berthing point.

Once Dragon is established on “final approach”, it will need to be granted clearance to proceed into the keep out sphere, at which time the Draco thrusters will make minute corrections to bring the spacecraft to dock.  Once Dragon arrives at the Station, it will pressurize itself to match the pressure of the orbiting laboratory. Following these timed events, the crew will be able to open the hatch and initiate arrival procedures.

The exact duration for Crew Dragon’s stay at the ISS is yet to be determined, however, as acknowledged by Steve Stitch, NASA’s Deputy Manager of Commercial Crew, it is expected that Crew Dragon will stay docked to Station anywhere from 30-119 days. Any consideration of a stay in excess of 119 days would need to be carefully considered, given the expected natural degradation of Dragon’s solar panels in the harsh conditions of space. 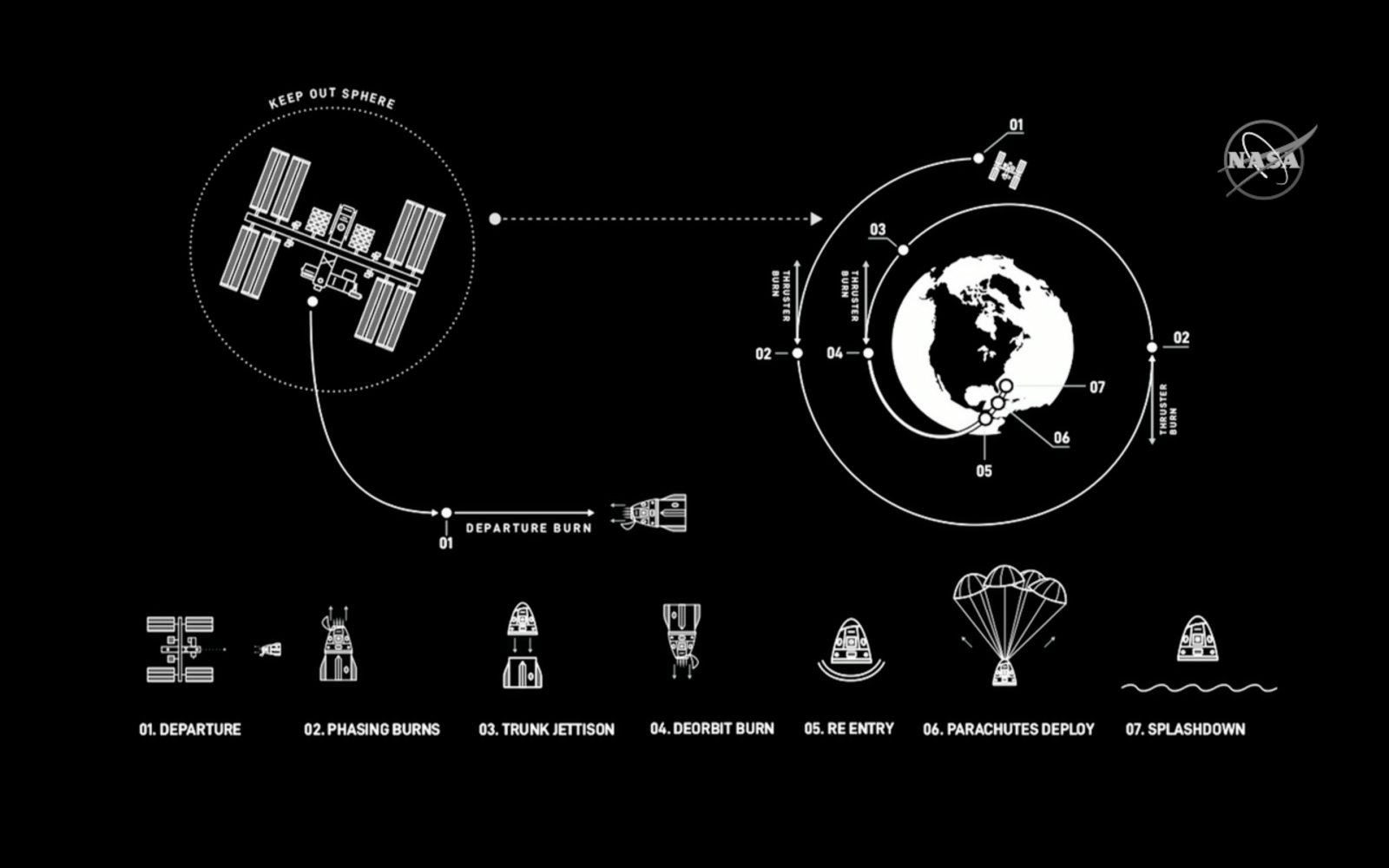 After the crew completes the required on-Station tasks, Crew Dragon will get to work initiating departure and reentry procedures. As pictured above, the reentry process for Crew Dragon consists of five tasks that must be completed prior to parachute deployment and splashdown in the Atlantic Ocean.

To begin, Dragon will depart the ISS much the same way it approached – slowly. At step 1 of the above slide, computer systems onboard the ISS, Dragon, and in front of controllers on the ground will all be continuously monitoring the spacecraft’s departure to take it beyond the space station’s keep-out sphere. Once beyond the keep out sphere, Dragon will complete its first burn to depart Station’s orbital path.

At step 2, the spacecraft’s thrusters will fire at two separate points, bringing Dragon onto a descent to set it up for its final deorbit burn. At step 3, Dragon will jettison its service module trunk and then start the deorbit burn which begins the reentry process. Dragon’s reentry will follow a similar path to many Space Shuttle reentries, as if the spacecraft were heading back to the Kennedy Space Center. After completion of the reentry phase, Dragon’s four Mark III parachutes will deploy, guiding the vehicle to a gentle splashdown in the Atlantic Ocean off the coast of Florida.

If Crew Dragon performs nominally during DM-2, a mission which is ultimately recognized as being the final flight test of the craft’s evaluation process, it will be fully certified to ferry humans to and from the International Space Station, giving the opportunity for the first operational Crew Dragon mission to take place later this year. DM-2’s launch will be the first time since the final flight of the space shuttle program in 2011, that American astronauts will have launched from the United States.

Bill Stevens – thank you very much for sharing your keen eye! You are quite right in that data about the two events (Stage Sep and stage landing) was co-mingled, resulting in a published error. Apologies, and thank you!

I would like to know the trajectory at launch. will it appear to go to the north East

In the second sentence of the last paragraph it says “certify” when it should actually read “certified”. Please correct. Thanks. Bakhtiar

Hi Brad Palmer – thanks for asking. It will indeed fly to the NE, very similar to the CRS Falcon 9 flights. Hopefully the weather allows the team to proceed as planned!

Hi Bakhtiar – fixed! Many thanks.

Why can’t you publish this in PDF format? Some of us are collectors of space technical documents.

I would be happy to have our people produce that for you, Philip. Which parts, specifically?

How far offshore will the demo II splashdown off the coast of Florida?

What will be the direction of flight as Crew Dragon enters the atmosphere? Will it pass over Continental US on re-entry?

Does anyone knows the Crew-2 trajectory orbit before docking to the ISS. I would like to try to see it if it is possible