Can I go back? An interview with veteran NASA astronaut Brian Duffy 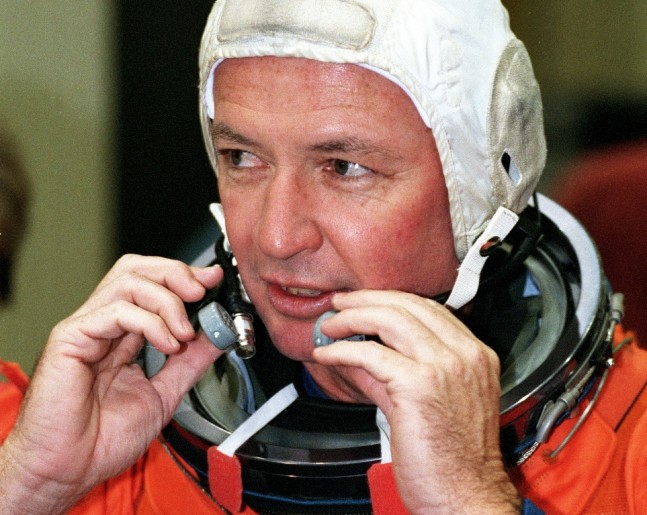 Space is always on the mind of veteran NASA astronaut Brian Duffy’s mind. One of the key figures working at aerospace giant Orbital ATK and a former Space Shuttle commander to boot – Duffy wants to travel once more into the black of space. The enthusiasm that emanated from him during a recent interview, all of it focused toward future journeys beyond Earth. In an interview with SpaceFlight Insider partner astrowatch.net, Duffy talked about his past accomplishments, his current efforts – and his hopes for the future.

Duffy was tapped by NASA to be an astronaut in 1986. One of his first functions with the space agency was the development and testing of displays, flight crew procedures, and computer software to be used on Shuttle flights. He, like all astronauts, served as spacecraft communicator (CAPCOM) in Mission Control during several Shuttle missions and would go on to Assistant Director (Technical) and as Deputy Director (Acting) of the Johnson Space Center. A veteran of four missions, Duffy provided straight-forward answers in terms of his hopes for the future of crewed missions to destinations throughout the Solar System.

Astrowatch.net: Did you always know you wanted to be an astronaut?

Brian Duffy: “I’ve always been interested in space exploration, be it human or robotic. It captured my imagination as a young boy when I watched Alan Shepard become the first American astronaut. I followed the Mercury, Gemini, and Apollo Programs and enjoyed movies about space travel and studies of space phenomena. “Little did I know that one day I’d be a part of a Program that would fly more humans into space than any other. The Space Shuttle Program was a marvelous achievement that enabled us to build the ISS and laid the foundation for our current space exploration programs… the Space Launch System (SLS) and Orion Multi-Purpose Crew Vehicle. They will take us where humankind has never been before and will help us build the capability to eventually send humans to Mars.”

Astrowatch.net: What was the most challenging part of your astronaut career?

Duffy: “Being a part of a program that made history at every turn was truly humbling. I loved going to work every day because I was going to be with a group of incredibly talented individuals dedicated to advancing human space exploration and I knew I was going to learn something new from them. We all had personal goals to strive to be perfect… perfect in our knowledge and perfect in executing in difficult and unusual circumstances and environments. It’s challenging to reach for such goals, but it’s rewarding to do your personal best and try. Challenges such as these have been there in every human space program in the past, and they will be there for SLS, Orion, and subsequent programs as well. The team building SLS and Orion is facing the same challenges today and doing so very successfully. The Orion EFT-1 test flight was a fabulous success, and the QM-1 test firing helped take the next major step in exploration.”

Astrowatch.net: You’ve never done a spacewalk, but have you helped prepare others for one?

Duffy: “I oversaw the planning, training, and execution of seven of them on my missions. As the Intra-Vehicular (IV) crewmember and later as Commander, I helped the spacewalkers into their suits, verified the suits’ integrity, and supervised the spacewalks ensuring safety and timeline adherence. Every spacewalk is risky for a number of reasons, and managing those risks is a team effort involving the crew and the team in Mission Control.”

Astrowatch.net: What were your duties as the commander of the STS-72 and STS-92 missions? Duffy: “The Commander is responsible for all aspects of the mission from the time the crew is officially named until the post-flight debriefings and PR events are completed. I decided how things would be done, who would be the primary crewmember for a task or event, and who would be the backup; how and when a lot of the training would be done. I worked with the Mission Operations Directorate’s team led by the Flight Director to plan and train for the missions and then execute them as an integrated team. Space flight is not an individual effort… it is a true team effort performed by individuals doing their best for the mission’s objectives. Above all, doing everything safely was foremost in everyone’s minds.”

Astrowatch.net: Which space mission do you remember the best?

Duffy: “I must admit, I remember each of the missions very fondly as each had a different crew, objective, and flight experiences. My crewmates are my lifelong friends. We had incredible experiences that only we shared after training together for extended periods and becoming as close to each other as family members. The first launch and ascent is etched in my memory in a special way, but the other three certainly are as well. The first night entry to a dawn landing was an amazing experience. And the first time you land a spaceship you’ve never flown before in the middle of a moonless night knowing the landing footage will be on CNN that day puts a little pressure on you… hard to forget that! So all the missions were great in their own way.”

Astrowatch.net: Would you like to go to space once more?

Duffy: “Please, may I? (laughs) I’d go in a heartbeat… especially riding Orion on the SLS. The SLS is going to be the safest launch vehicle ever built as its major components are all derived from proven legacy systems only they’re improved in many ways.

“The Orion will launch with a Launch Abort System (LAS) built by Orbital ATK to ensure the safety of the crew from the time they enter the vehicle until the system is no longer needed during ascent and is jettisoned. It will act as the equivalent of an ejection seat to pull the crew from danger and position them for a safe entry and landing. The SLS boosters will be based on the Space Shuttle Program’s solid rocket boosters, but will have many changes improving flight performance and reducing potential environmental impacts. And the SLS core stage will be based on the External Tank (ET) concept the Shuttle used as well as the Space Shuttle Main Engines (SSMEs). All of this adds up to a vehicle using hardware and technologies that have been proven and improved. I’m ready to go tomorrow!” Duffy smiles from inside the cockpit of his T-38 jet. Photo Credit: NASA

Astrowatch.net: Could you share some details on your post-astronaut career? How your spaceflight experience is helping you in your current role of the Vice President of Orbital ATK?

Duffy: “After flying four space missions and doing more than I ever dreamed, I was given the opportunity to join Lockheed Martin at the Kennedy Space Center to lead a team in support of KSC’s launch and landing infrastructure. I jumped at the chance and moved to Florida to continue being a part of human space exploration. After a few years, the company recognized that my experience in both space exploration as well a 26-year career as an Air Force officer could be put to good use in the military space arena, and they asked if I would move to Colorado Springs to support the USAF Space Command and US STRATCOM activities. “When the Constellation Program was in full swing, Lockheed Martin named me as their Program Manager for the Altair Lunar Lander Program. That effort was subsequently cancelled and it was at that point that ATK, now Orbital ATK, offered me the chance to join the company to head up the human space exploration activities at the Johnson Space Center in Houston, and later added the Kennedy Space Center to my portfolio.

“During my sixteen years within NASA, I was involved in many programs including the redesign of the solid rocket boosters following the Challenger accident. I knew that what is now Orbital ATK was an excellent corporation and that it would be a good fit for me personally and professionally. That has indeed been the case. I’ve been a part of the Orbital ATK team for over four most enjoyable years and thoroughly enjoy being part of their SLS and exploration team that will continue to play a key role in the effort to get to Mars. I feel the experiences I’ve had at NASA and in the Air Force have added to the human space exploration effort.”

Astrowatch.net: In your opinion, is the maiden flight of Orion spacecraft really a first step towards sending humans to Mars?

Duffy: “Absolutely! Leaving the Earth’s gravity well for low Earth orbit and beyond is always a challenge, but we’ve learned how to do it quite safely. Coming back home is a completely different challenge, and we have a lot to learn about handling the velocities we’ll experience coming back from Mars. The Orion test flight let us see how our materials and technologies handled eighty-four percent of the energy we’d experience coming back from the Moon.

“We’ve done that before, of course, but not in four decades, and the design was different and the capsule smaller. The data are being evaluated now and will no doubt lead to improvements in design and materials. A return from Mars will require dealing with even more energy, so we have a lot to learn and the test program will help get us there. The Orion and SLS combination is the future of space exploration, and I’m excited to watch it happen and proud to be a part of it.” Brian Duffy is a retired U.S. Air Force colonel and a former NASA astronaut. He flew aboard four Space Shuttle missions. Selected by NASA in June 1985, Duffy became an astronaut in July 1986. He has logged a total of 40 days, 17 hours, 34 minutes, and 59 seconds in space.

Great interview with a great American! Thanks for posting.